The change comes as a token of appreciation of late boxer, humanitarian and activist Muhammad Ali who was chosen as Sports Personality of the Century by the BBC.

Here, we highlight some of his most famous and inspiring quotes of Muhammad Ali, the first famous Muslim champion in the history of the United States.

“The word ‘Islam’ means ‘peace.’ The word ‘Muslim’ means ‘one who surrenders to God.’ But the press makes us seem like haters.”

“I am a Muslim and there is nothing Islamic about killing innocent people in Paris, San Bernardino, or anywhere else in the world. True Muslims know that the ruthless violence of so called Islamic Jihadists goes against the very tenets of our religion.”

“We as Muslims have to stand up to those who use Islam to advance their own personal agenda..They have alienated many from learning about Islam. True Muslims know or should know that it goes against our religion to try and force Islam on anybody.”

“I’ve made my share of mistakes along the way, but if I have changed even one life for the better, I haven’t lived in vain.”

“I’m not afraid of dying. I have faith; I do everything I can to live my life right; and I believe that dying will bring me closer to God.”

“Live every day like it’s your last, because someday you’re going to be right.”

“Boxing is a lot of white men watching two black men beat each other up.”

“Float like a butterfly sting like a bee – his hands can’t hit what his eyes can’t see.”

“He who is not courageous enough to take risks will accomplish nothing in life.”

“Hating people because of their color is wrong. And it doesn’t matter which color does the hating. It’s just plain wrong.”

“Service to others is the rent you pay for your room here on earth.” 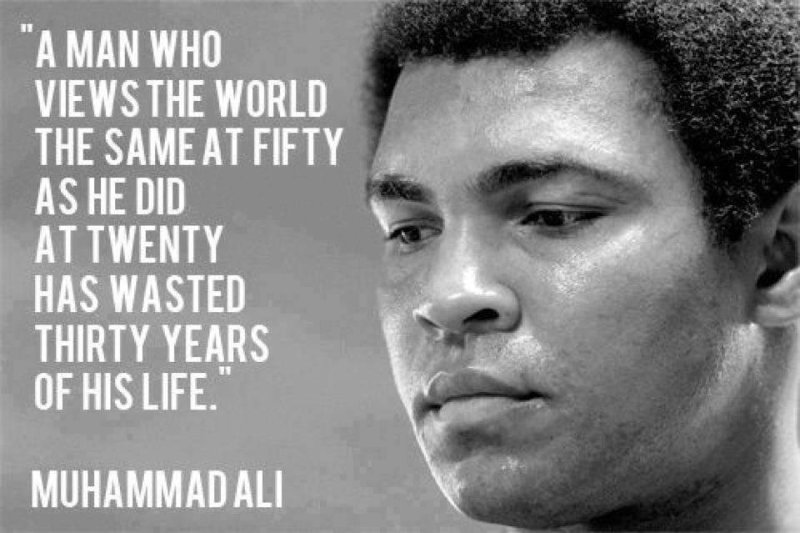