According to Rosi, ‘Fire at Sea’ unlike news reports, is about human beings.
aaa

The Berlinale jury chose Gianfranco Rosi’s documentary about the migrant crisis in Europe as winner of its Golden Bear.  “Fire at Sea” engages deeply with a key topic of our time, but also displays a distinctive, humane cinematic style; something that Rosi himself acknowledges as the essence of his style

“narrative to describe reality. So the story has to have a beginning, a middle and an end . It’s never random. But it all starts from reality and my characters. And reality becomes cinematic narrative.”

The Berlin International Film Festival also called the Berlinale, is one of the world’s leading film festivals and most reputable media events. The festival has been held annually in February since 1978 in Berlin, Germany.  It is almost fitting that a documentary that explores Europe’s biggest refugee crisis since World War II should be recognized at in a country that once upon a time experienced the same issue.

Gianfranco Rosi is an Italian director, cinematographer, producer and screenwriter is not new to winning prestigious awards, his film “Sacro GRA” won Golden Lion at 70th Venice International Film Festival. “Sacro GRA” is the first documentary film to win Golden lion in history of the Venice film festival and the first Italian film to win in fifteen years.

Rosi is also not a stranger to war, separation and migration, he was born in Asmara, Eritrea; during the Eritrean War of Independence. At the age of 13, he was carried to safety in Italy in a military plane, leaving his parents in Eritrea. After living as a youth at Rome and Istanbul, at 20 Rosi moved to New York to attend the New York University Film School.

In his acceptance speech for the Golden Bear award, Rosi stated that his intention was to heighten awareness of the migrant situation, saying,

“It’s not acceptable that people die crossing the sea to escape from tragedies.” And went on to dedicated the prize to its residents “who open their hearts to other peoples.”

“Fire at Sea” revolves around two people; a local doctor and a 12-year-old boy whose ordinary life  is set against the backdrop of men, women and children trying to make the crossing from Africa in boats that are far too small and decrepit.

Rosi stresses that in the film “there is this clear separation between ordinary life on the island, the refugee camp and the rescue operations.”

At the end of the documentary, the audience witnesses a scene that shows dead people in the stowage area of a navy ship. That was the last scene that Rosi shot, he had spent 40 days on boats of the Italian navy filming all kinds of things. Then one day, death appeared in front of him and he could not avoid looking at it.

In an interview, he explains that he had to decide:

“Shall I look or not? Shall I turn the other way?” He was told by the ship’s captain “to go in the stowage and capture the tragedy.” But Rosi had always tried to avoid shooting scenes like that. He said: 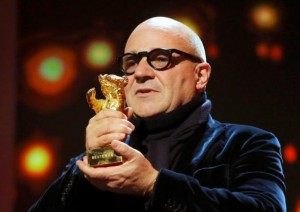 “It’s like saying the gas chambers are too harsh. It’s your duty. You have to show these images to the world.”

So he followed the advice of the captain and saw the asphyxiated dead bodies hugging each other. For Rosi, the challenge was to build up to that scene and have the audience internalize them without it being considered something somewhat voyeuristic, or purely shock value that was a huge challenge, which he won.

Thousands of Syrians flee their country every day. They often decide to finally escape after seeing their neighborhoods bombed or family members killed.

The risks on the journey to the border can be as high as staying amid the war. Families walk for miles through the night to avoid being shot at by snipers or being caught by soldiers who will kidnap young men to fight for the regime.

Every year of the conflict has seen an exponential growth in refugees. In 2012, there were 100,000 refugees. By April 2013, there were 800,000. That doubled to 1.6 million in less than four months. There are now 4.3 million Syrians scattered throughout the region, making them the world’s largest refugee population under the United Nations’ mandate.

The U.N. predicts there could be 4.7 million registered Syrian refugees by the end of 2016 .

According to Rosi, ‘Fire at Sea’ unlike news reports, is about human beings.

“It’s not about numbers. Each refugee is a human being, a person. Nobody wants to leave their homes. They are forced to. So I hope the film will raise more awareness in public opinion and especially make politicians more aware.”

Yet he is adamant that the film is not political. It’s an opportunity to testify an ongoing tragedy that will grow exponentially, an attempt to anticipate something which is inevitable. These people will continue to arrive and there are no borders, barriers, barbed wire that can stop this desperation. Whoever is escaping from a tragedy, from fire, is going to throw themselves in the sea.”

It is this powerful element of the film that made Meryl Streep, chair of the Berlin jury, describe the film as “a daring hybrid of captured footage and deliberate storytelling that allows us to consider what documentary can do. It is urgent, imaginative and necessary filmmaking.