The actual food is sold in wrappers that provide information, facts and interviews.
aaa

We’re all aware of food’s power over human beings. It is often used as an alternative medicine or to boost energy, sharpen memory, fight infections or even as an aphrodisiac to improve one’s love life.

The saying goes that “The quickest way to one’s heart is through the stomach.” So it  seems logical that food could be used as a means to heal political rifts and to enlighten people of other nations.

Eating outside the box

Conflict Kitchen is an eatery that is also a not-for-profit experimental public art project based in the center of Pittsburgh, Pennsylvania in the United States. It encourages dialogue and promotes peace and coexistence through the food it serves from countries with which the U.S. is in conflict. Simply put, it is an invitation to love and understand rather than to judge and hate.

The restaurant was cofounded in 2010 by Carnegie Mellon University art professor Jon Rubin and by Dawn Weleski. It is funded through its food sales and by Waffle Shop: A Reality Show, the Benter Foundation (a foundation that supports leaders, organizations and ideas that help communities and individuals thrive), the Center for the Arts in Society, the Sprout Fund (an agency supporting innovative ideas, catalyzing community change) the Studio for Creative Inquiry (supports atypical, anti-disciplinary and inter-institutional research projects at the intersections of arts, sciences, technology and culture).

The takeout restaurant operates seven days a week from 11 a.m. to 6 p.m. Food and free speech are the main features on the Conflict Kitchen’s menu.

According to the BBC, the restaurant’s founders “get to define what conflict means – it can range from outright war to economic sanctions.”

The mission of Conflict Kitchen is to “create a larger discourse about the countries we are in conflict with on the street.” Rubin says, “We are a daily reminder of the countries that we serve the food of – countries that Americans may not think or know much about.”

This discourse on the street is created via food served from a take-out style storefront, which changes identities every 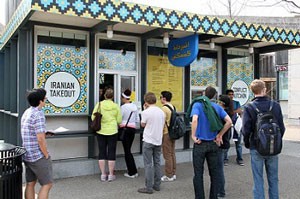 six months to highlight another country and allow enough time to focus on a particular nation. So far, the cuisines of Iran, Afghanistan, Cuba, North Korea and Venezuela have been featured, with Palestine the current country of focus. Conflict Kitchen’s name changes according to the cuisine.

During the Iranian phase it was called Kubideh Kitchen, the Afghan name was Bolani Pazi, the Venezuelan version was titled La Cocina Arepas, and when it was Cuba’s turn it was called Cocina Cuban. The changeover is usually accompanied by various events and is celebrated with a small festival and music from the new nation, as well as performances and discussions that seek to expand the engagement of the public with the culture, politics and issues at stake within the focus country.

These events have included live international Skype dinner parties between customers in Pittsburgh on the one hand and, on the other, with young professionals in Tehran, Iran; documentary filmmakers in Kabul, Afghanistan; and community radio activists in Caracas, Venezuela.

It offers more than delicious meals

The actual food is sold in wrappers that provide information, facts and interviews. The restaurant owners believe it is more likely that people will read food wrappers than pamphlets handed out on the street. The text on the wrappers is culled directly from interviews with people living both in the United States and in the conflict country.

Naturally, the thoughts and opinions expressed in the interviews are often contradictory and complicated by personal perspective and history. These expected contradictions reflect a nuanced range of thought within each country and serve to instigate questioning, conversation and debate with the customers.  In the case of North Korea, interviews were only conducted with North Korean defectors, since it was extremely difficult if not impossible to access people inside the country.

In fact, it was only during a trip to Cuba for research, that Rubin got the chance to explore and learn how to bring North Korea to the street of America after visiting its embassy in Vedado. To the great surprise of Conflict Kitchen’s team, they were given helpful advice on North Korean cuisine from a diplomat who answered the door.

But not everyone is a fan of Conflict Kitchen. This was highlighted after the restaurant’s latest choice of cuisine, Palestinian food, caused controversy in the city, eventually leading to a death threat and temporary closure of the venue.

Critics pointed out that the U.S. is not in conflict with the Palestinian people. They claimed that the pamphlets served with the dishes included anti-Israeli propaganda.

Conflict Kitchen’s founders said the project was designed to encourage debate among Americans. The Jewish Federation of Greater Pittsburgh did not agree. They saw it as propaganda that misrepresented Israel, blaming it for all the Palestinians’ problems and not addressing other factors or acknowledging Hamas’ role in threatening Israel. Gregg Roman of the Jewish Federation of Greater Pittsburgh stresses further that the information “dished” out by Conflict Kitchen is “in reality opinion not fact … it is not art but hate speech.”

He also questions the funding behind Conflict Kitchen and accuses them of being anti-Israel, something denied by both founders of Conflict Kitchen, who clearly stress that they are “pro human rights and not pro Palestine”.

After the death threat and the restaurant’s temporary closure, one local man saw that “closing down is a sign of the dialogue in the city closing down.”

Thankfully, Conflict Kitchen reopened to an ever-larger crowd. Even the Jewish Federation of Greater Pittsburgh has offered to sit on the table with Conflict Kitchen to try and resolve the dispute and “focus on what unites us rather than what divides,” which is the core essence of Conflict Kitchen’s concept.

Photos are taken from http://conflictkitchen.org