Zheng He was born in 1371 in the southern China region of Yunnan to a Hui (a Muslim Chinese ethnic group) family.
aaa

When people think of great explorers, they think of the usual names: Marco Polo, Ibn Battuta, Evliya Çelebi, Christopher Columbus, etc. But not many know of one of the most interesting and influential of all time. In China, he is well known, although not always globally recognized or glorified. He is Zheng He, the Muslim who became China’s greatest admiral, explorer, and diplomat.

Zheng He was born in 1371 in the southern China region of Yunnan to a Hui (a Muslim Chinese ethnic group) family. His birth name was Ma He. In China, the family name is said first, followed by the given name. “Ma” is known in China as short for “Muhammad”, indicating Zheng He’s Muslim heritage. Both his father and his grandfather were able to travel to Makkah and perform Hajj, so Zheng He came from a practicing Muslim family.

At a young age, his town was raided by the Ming Dynasty’s army. He was captured and transported to the capital, Nanjing, where he served in the imperial household. Despite the oppressive and difficult circumstances he was in, Zheng He actually befriended one of the princes, Zhu Di, and when he became the emperor, Zheng He rose to the highest positions in government. At this time, he was given the honorific title “Zheng” and was known as Zheng He.

In 1405, when emperor Zhu Di decided to send out a giant fleet of ships to explore and trade with the rest of the world, he chose Zheng He to lead  a massive expedition. In all, almost 30,000 sailors were in each voyage, with Zheng He commanding all of them.

Between 1405 and 1433, Zheng He led 7 expeditions that sailed to present day’s Malaysia, Indonesia, Thailand, India, Sri Lanka, Iran, Oman, Yemen, Saudi Arabia, Somalia, Kenya, and many other countries. It is probable that during one of his journeys, Zheng He was even able to go to Makkah for Hajj.

Zheng He was not the only Muslim on these expeditions. Many of his advisors and were also Chinese Muslims, such as Ma Huan, a translator who spoke Arabic and was able to converse with the Muslim peoples they encountered on their journeys. He wrote an account of his journeys, titled the Ying-yai Sheng-lan, which is an important source today for understanding 15th century societies around the Indian Ocean.

Seeing these expeditions must have been an event that people did not easily forget. The ships Zheng He commanded were up to 400 feet long, many times the size of Columbus’s ships that sailed across the Atlantic. For hundreds of years, people thought that the giant proportions of these ships were exaggerations. However, archaeological evidence from the shipyards where they were built in the Yangtze River prove that these ships were in fact even larger than modern football pitches.

Everywhere they sailed, they commanded the respect (and sometimes fear) of the local people, who offered tributes to the Chinese emperor. Because of this tribute and trade with all the peoples they encountered, Zheng He would sail back to China with exotic goods such as ivory, camels, gold, and even a giraffe from Africa. The expeditions sent one message to the world: China is an economic and political superpower.

Economics and politics were not the only effects of this great fleet that was commanded by Zheng He. He and his Muslim advisors regularly promoted Islam wherever they traveled. In the Indonesian islands of Java, Sumatra, Borneo and others, Zheng He found small communities of Muslims already there. Islam had started to spread in Southeast Asia a few hundred years before through trade from Arabia and India. Zheng He actively supported the continued growth of Islam in these areas. 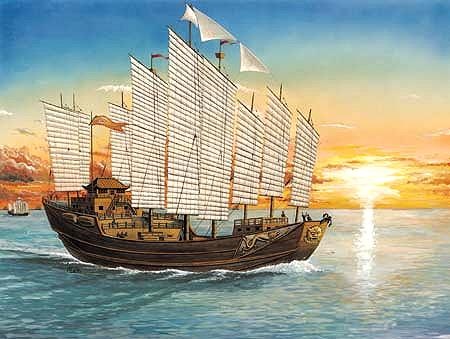 The ships Zheng He commanded were up to 400 feet long, many times the size of Columbus’s ships that sailed across the Atlantic.

Zheng He established Chinese Muslim communities in Palembang, and along Java, the Malay Peninsula, and the Philippines. These communities preached Islam to the local people and were very important to the spread of Islam in the area. The fleet built masjids and provided other social services the local Muslim community would need.

As an admiral, diplomat, soldier, and trader, Zheng He is a giant of Chinese and Muslim history. He is seen as one of the greatest figured in the spread of Islam in Southeast Asia. Unfortunately, after his death, the Chinese government changed its philosophy to a more Confucian one which did not support such expeditions like Zheng He’s. As a result, his accomplishments and contributions were mostly forgotten or overlooked for hundreds of years in China.

His legacy in Southeast Asia, however is quite different. Numerous masjids in the region are named after him to commemorate his contributions. Islam spread in Southeast Asia through many forms, including trade, travelling preachers, and immigration. Admiral Zheng He was also a major part of its spread in that region. Today, Indonesia has the largest Muslim population of any nation in the world, and much of that could be attributed to the activities of Zheng He in the region.

Ignatius, A. (2001, August 20). The asian voyage: In the wake of the admiral read more. Time Magazine, Retrieved from