The story of Creation includes many things, the creation of Man and the creation of creatures other than Man. For example: throne, heavens and earth, mountains, seas and rivers, animals, plants, stars, winds, moon, day, and light.

I deduced that you mean by Islamic creation story the creation of earth and heaven. Hope I was right. I will quote some verses from Quran that speak about this issue. The Quran says what means:

{Your Guardian-Lord is Allah, Who created the heavens and the earth in six days, then He established Himself on the throne [of authority]: He draweth the night as a veil o’er the day, each seeking the other in rapid succession: He created the sun, the moon, and the stars, [all] governed by laws under His command. Is it not His to create and to govern? Blessed be Allah, the Cherisher and Sustainer of the worlds!} (Al-A`raf 7:54)

This verse assures that the heavens and earth were created in six days and the verse does not differentiate between their creations; that is, it mentions their creation together. But there are other verses that show the stages of this creation. The Quran says what means:

{Say: “Is it that ye deny Him Who created the earth in two days? And do ye join equals with Him? He is the Lord of [all] the worlds.” He set on the [earth] mountains standing firm, high above it, and bestowed blessings on the earth, and measured therein all things to give them nourishment in due proportion, in four days, in accordance with [the needs of] those who seek [sustenance]. Moreover, He comprehended in His design the sky, and it had been [as] smoke: He said to it and to the earth: “Come ye together, willingly or unwillingly.” They said: “We do come [together], in willing obedience.” So He completed them as seven firmaments in two days and He assigned to each heaven its duty and command. And We adorned the lower heaven with lights, and [provided it] with guard. Such is the decree of [Him] the Exalted in might, Full of knowledge.} (Fussilat 41:9-12)

Ibn Kathir says in his tafseer (explanation of Quran): “Those verses explain vastly the verse *{Your Guardian-Lord is Allah, Who created the heavens and the earth in six days}*, they differentiate the days taken to create earth and that taken for heaven. The verses mentioned that Allah first created earth as it is the base and after it the ceiling is created, Allah said what means:

{It is He Who hath created for you all things that are on earth; then He turned to the heaven and made them into seven firmaments. And of all things He hath perfect knowledge.} (Al-Baqarah 2:29)

The “days” of creation had two tafseers: either they are days as ours or one day as a thousand years of our days. The Quran says what means:

{…verily a day in the sight of thy Lord is like a thousand years of your reckoning.} (Al-Hajj 22:47)

Or the day could be even longer than that. The Qur’an also says what means:

{[Whereby] the angels and the Spirit ascend unto Him in a Day whereof the span is fifty thousand years} (Al-Ma`arij 70:4)

The point is that we should not understand the word translated as day to mean a 24-hour period. The two verses below stress that earth and heaven were created in six days. The Quran says what means: 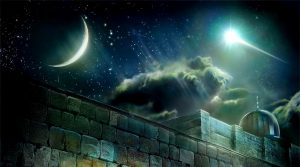 {Verily your Lord is Allah, Who created the heavens and the earth in six days, then He established Himself on the throne [of authority], regulating and governing all things. No intercessor [can plead with Him] except after His leave [hath been obtained]. This is Allah your Lord; Him therefore serve ye: will yet not receive admonition?} (Yunus 10:3)

{He it is Who created the heavens and the earth in six days—and His throne was over the waters—that He might try you, which of you is best in conduct. But if thou wert to say to them, “Ye shall indeed be raised up after death,” the unbelievers would be sure to say, “This is nothing but obvious sorcery!”} (Hud 11:7)

Hope this answered your question. Let me know if you want more details.