aaa
Q I am a Muslim girl presently studying in China. When I was in Bangladesh, I used to cover my head. After coming to China, I found that when I cover head everyone look at me in great surprise. They ask me lots of unnecessary questions and so on. So, I felt very shy and I stopped covering my head. It was because I felt that I am attracting everyone's attention by covering my head. So may I get your suggestion about such situation? Should I continue in wearing my hijab or not? What does Islam say about this situation? Is the hijab necessary for Muslim woman or is it possible in some conditions not to wear it?

The choice to wear or not to wear hijab remains a controversial one despite what the Quran clearly says in Surah 24, verse 31:

{And say to the believing women that they cast down their looks and guard their modesty and do not display their beauty and ornaments except what appears thereof, and let them draw their veils [head-covers] over their bosoms, and not reveal their ornaments except to their husbands…}

Despite the clear Quranic order, some modern Muslims feel somehow that it is unnecessary to wear and argue that it is not in the Quran!

Since, the attack on America, much has happened to Muslims and Muslim women in particular, as the wearing of hijab identifies the Muslim woman. Discussions and debates are now going on in many Muslim communities in the West and elsewhere about the topic, including interpretations and misinterpretations of Islamic conduct and practice.

Many myths about Muslim women in the West have portrayed a state of oppression. This is while Sheikh `Abdul Aziz bin Baaz, the renowned scholar, has said:

“The status of the Muslim woman in Islam is a very noble and lofty one and her effect is very great in the life of every Muslim. Indeed, the Muslim woman is the initial teacher in the building of a righteous society, providing she follows the guidance from the Book of Allah and the sunnah (traditions) of His Prophet”.

This is the status we (Muslim women) hold in Islam. And if our current position or status is any less than that, it is because of cultural or personal interpretations.

Many Muslim and some non-Muslim women in the backlash of September 11th chose to see the hijab as a symbol of hope instead of a reason for fear. The University of Connecticut – US, challenged popular conceptions of Muslim women after September 11th. Their Campus Safe organization began a support and solidarity for women across the campus and September 24th – 28th last year was dedicated to wearing the hijab. Due to its success, the opportunity was seized again from October 1st, last year.

Khalid Alyahya of the student Muslim Association reflected: “Muslim women would rather be judged on who they are, rather than the basis of physical appearance. The hijab is to play down competition and focus on a woman’s intellect and experience…For some it is ‘I should be valued for my person rather than the way I look’.”

Giving credence to the support, as a Muslim woman student on the campus, Iram Chaudhary, a 5th semester Health major commented: “I think it’s pretty good. It makes me feel comfortable.” Even a non-Muslim sister wanted to show support. A. Farrel, a 5th semester Math major, sharing her feelings said: “I really like the idea but I don’t want to insult their culture. I feel like I am imposing on their culture, but I want to do this.” 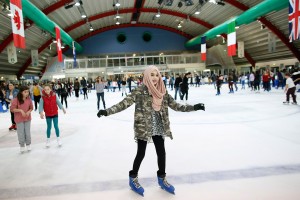 Imagine feeling pressured to not wear the hijab! In public, social interactions with non-Muslims would change. The initial experience might be one of ease, but as time progresses, there would not be any limitation on what would be expected of you.

Eventually, one would concede on certain aspects like male-female interaction. You might also in the course of time feel uncomfortable with performing prayers at the University, or even be seen reading your Arabic Quran in the park. It then becomes more difficult to defend what one represents.

The process of Islamization is not just a process for new Muslims, but is in fact an ongoing process that can change daily. Dr. Shahid Athar describes this in three stages:

In fact, one becomes oppressed by the modern demands for outer beauty, which reinforce female fragility and susceptibility. This is a whole culture in itself, opposite to that which is purported to be by the West. One then becomes subject to sexual harassment in the form of rape, stalking, the pressure to have premarital sex and domestic violence, all of which are social phenomena in the West and have become an increasing problem in Westernized countries.

{O Prophet! Say to your wives and your daughters and the women of the believers that they let down upon them their over garments, [this will be more proper] that they may be known, and thus they will not be given trouble: and Allah is Forgiving, Merciful}

If one feels uncomfortable about wearing the hijab, this also becomes a part of your self-image and the image you introduce to the other. Sister, return curious glances with a saluting smile, or return that person’s dig 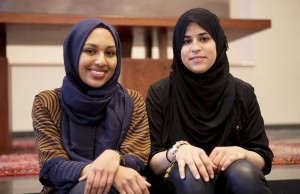 nity and self-respect by seeing past their threat, with a quiet strength that is polite as to a stranger. Then move on and thank Allah  that you are holding firmly to your belief, in an atmosphere that does not encourage you to do that.

Yet, of course if you become sure that this outlook would threaten your safety, then this would be another issue. By this I mean if it is not simply an unnecessary fear and you might really get endangered or threatened of physical abuse or harm, not only a matter of feeling lonely and weak.

I am sure if you look for good Muslim company, you would find some other Muslim students, who would be of great help. Also, if you start addressing the issue and turn from an imaginary victim to an activist in your university, advocating multiculturalism and dialogue, you would have more confidence in what you are and what you represent.

We are here for you if you need further discussion of the different angles of the matter. You might of course be feeling lonely, so do keep in touch and we would be happy to support you with our sisterhood and of course our sincere dua.

Keep well and may Allah bestow on you his mercy and support you with strength and wisdom.