aaa
Q Assalaamu Aleikum. I had been a Christian till recently I proclaimed the Shahada and accepted Islam as my faith to get relieved from all my sins. My present name is Jibril which is only known to me and a friend of mine. I reverted to Islam secretly as I fear my parents and the society around me who are Christians. Because last year when I told my family that I want to convert to Islam they opposed very strongly and my mother even threatened that she will commit suicide if I do so. So I secretly proclaimed the Shahada and accepted Islam. I want to know that whether I am right to keep it a secret. I have no fear of anybody other than Allah, but my only concern is my mother who will not hesitate from doing what she had threatened to do as I accepted Islam. Please guide me with your opinion and what can I do to become a good Muslim and get closer to Allah. Allah Hafiz.

First, welcome to Islam! May Allah reward you for all the hardship you endured to get to that point.

If you are able to practice all your Islamic duties without informing your parents about this personal decision in your life, then you may wait for the right moment; eventually, they will have to know, whether directly or indirectly.  It is something that you may not be able to hide for a very long time.

However it will make it easier if they see a positive change in your behavior, such as showing extreme kindness to your parents, and your brothers and sisters if you have any or helping in the house chores.  Basically, find any opportunity to help your family. This is one of the most important characters of a Muslim, being helpful, kind, and having good manners:

Narrated Masruq: We were sitting with Abdullah bin Amr who was narrating to us (Hadith): He said, “Allah’s Apostle was neither a fahish (who speaks bad words) nor a mutafahhish (uses obscene words to make people laugh), and he used to say, ‘The best among you are the best in character (having good manners).”‘ (Bukhari, Book 73, Hadith 61)

I can almost guarantee you that your mother will not commit suicide unless you know that she had a history of a similar behavior.

This reminds me of the story of Mus’ab ibn Umayr, one the companions of Prophet Muhammad (peace be upon him). When he accepted Islam, he feared his mother most because of her dominant personality and concealed his acceptance to Islam.

However, he was not able to do so for long since news eventually reached her. To turn him away from his new religion, she threatened to kill herself, but Mus’ab insisted on his faith and his mother eventually had to give up.

So use whatever time you may have until they discover that you have become a Muslim.  In the meanwhile, try to learn more and more about Islam, especially, the misconceptions that non-Muslims have about Islam and learn how to explain that Jesus was neither God nor the son of God, why Jesus was not crucified, and so on.

This information will help you when your family and Christian friends start asking you all kind of questions, so you have to be ready. You never know, Allah might guide one of them through you. 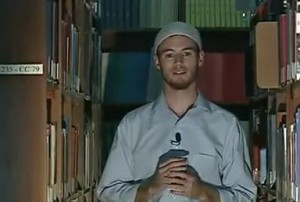 To get closer to Allah, you need to do it gradually since the best actions before Allah are the ones that are consistent even if they were little.  So it is no use doing too much at one time.  Schedule your time that you are able to do your work and worship without jeopardizing either.

Begin with the five daily prayers (salat) and escalate to perform them in congregation whenever you can, if not, at least with your friend; encouraging each other is the essence of keeping up.

After consistently performing the salat, add the additional prayers before and after the obligatory prayers and remember to supplicate by asking Allah from His bounty and to guide humanity.

I hope this helps answer your question and please do not forget us in your supplication (du’aa).