aaa
Q Why is punishment for stealing so harsh in Islam?

Thank you for your question and for contacting Ask About Islam

Any sane and normal human being agrees that kindness and forgiveness is the highest virtue one can possess. Past and present testimonies are clear proof that a harsh treatment of a wrong doer may have an adverse effect on him/her – destroying any chance of rehabilitation.

Such is a true fact – only if such forgiveness and kindness involved an individual or isolated situation. But what if it involves a whole society? Let us take a closer look at the American court system versus an Islamic one.

When it comes to stealing, the robber once caught, he is brought forth to the court of law and according to the gravity of his theft he is jailed or made to do community work or some substitutes.

Ultimately he is off the hook and in the majority of cases he returns to theft and is not so concerned about the consequences. He is willing to take a chance of not getting caught and end up profiting from his theft and if by chance he got caught, well… jail is not all that bad. Three meals a day, exercise programs, in-jail study programs and allowed visitations! To some criminals, jail in the USA, is like a restricted hotel stay.

In essence, the courts keep forgiving the thieves over and over again and end up seeing them back in court only to be jailed and released again.

Who pays for all this? The American tax payers pay an average of $50,000 a year for each incarcerated person!

In Islam, it is prescribed that in case of a theft, to cut off the thief’s hand. Allah Almighty Says in the Noble Quran (what means):

{[As for] the thief, the male and the female, amputate their hands in recompense for what they earned [i.e. committed] as a deterrent [punishment] from Allah. And Allah is Exalted in Might and Wise.} (Quran 5:38)

“The hand (of the thief) should be cut off for (the theft of) a quarter of a Dinar or more.” (Al-Bukhari)

There are other conditions that have to be met before such punishment is administered such as: The thief must have reached the age of puberty and to be sane.  Also, the verdict must be issued and carried out by legal authorities after proving that the theft did, in fact, take place. 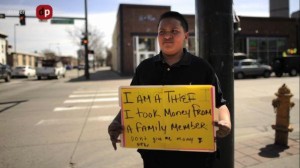 Now when the news of an Islamic country cutting off the hand of a thief is published, most of the western world goes into an uproar—accusing that country of acting inhumane and barbaric!

If they were to look a bit closer, they would find that in such countries, theft is committed much less due to the fear of losing a limp. In such case the fear factor works where as the forgiveness factors in the West have not!

Let us see what the Creator says about the retribution:

{And in (the law of) retaliation there is (saving of) life for you, O’ people of understanding, so that you may guard yourselves (against evil).} (Quran 2:179)

What is the meaning of “in the law of retaliation there is (saving of) life for you?

The above verse was in case of a murder. However, it applies in other cases when retaliation is administered. The scholars state that when you take a life of a murderer or punish a thief or one who assaults others, then you are preventing other losses of lives and harm to the society as a whole.

The Prophet cursed the thief because he is a corrupt element in society, and if he is left unpunished, his corruption will spread and infect the body of the Ummah (Muslim community).

In a theft incident, a Makhzoomi noblewoman (from the tribe of Makhzoom) stole at the time of the Prophet and Usamah ibn Zayd, a respected companion, wanted to intercede for her. The Prophet became angry and said:

“Do you intercede concerning one of the Hadd (prescribed punishment) set by Allah? Those who came before you were destroyed because if a rich man among them stole, they would let him off, but if a lowly person stole, they would carry out the punishment on him. By Allah, if Fatimah Bint (daughter of) Muhammad were to steal, I would cut off her hand.” (Al-Bukhari)

This is the ruling of Allah concerning theft; that the hand should be cut off from the wrist joint.

The cutting off the hand is a serious matter, thus unless the above-mentioned conditions are met, it cannot be cut off.

It is clear here that cutting off the hand of a thief, although painful to one, serves to protect a society and discourages further corruption.

Although humans may argue for or against any man-made laws, ultimately the law and judgment of Allah is supreme over all. 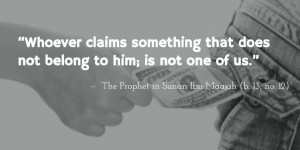 Let us reflect on this verse:

{Then is it the judgment of [the time of] ignorance they desire? But who is better than Allah in judgment for a people who are certain [in faith].} (Quran 5:50)