aaa
Q I am a non-Muslim and I am reading about your religion. I read that the formula that Muslims use before they start anything includes two important names of the Muslims' God. I am asking about the significance of this formula and why these names are mentioned?

Thank you for your interesting question and for contacting Ask About Islam.

The formula you mentioned is probably what Muslims refer to in Arabic as the “basmalah“, the statement with which Muslims begin when we embark on various endeavors. This statement is: “Bismillahir rahmanir raheem“, which translates as, “in the name of Allah, the Most Merciful, the Most Beneficent”.

When a Muslim says the basmalah upon embarking on any work, he or she means: I start by and with the name of God, in quest of His help, blessings, and guidance.

Also Muslims believe that, beginning with this statement, if done with sincerity and conscientious awareness, will not only serve to invoke the blessings and help of God, but will also act as a reminder for the one saying it that this act he or she is commencing must conform to the Divine will and His cause of justice and mercy.

As you may have noticed, this statement has three names, which all refer to God; the first of which is “Allah”. This is His proper name, and it is the name of God used by the Arabs — including the Christians — before Islam; and it is the name still used in Arabic versions of the Bible.

Muslims believe it has been always His name, which was revealed to the previous prophets, including Adam, Abraham, Moses and Jesus (peace be upon them all). Historical, archaeological, as well as theological evidence supports that belief.

According to Encyclopedia Britannica, “The name’s [Allah] origin can be traced back to the earliest Semitic  writings in which the word for “god” was Il or El, the latter  being an Old Testament synonym for Yahweh. Allah is the  standard Arabic word for “God” and is also used by Arab  Christians as well as by Muslims. ” (Allāh, last accessed on July 7, 2013)

The word Allah is close to the Arabic word “Al-Ilah” (The God). And, whether or not it is derived from it, it does imply the meanings of al-Ilah. These meanings are: the only One to be worshiped; the One to whom belongs all devotion, worship, and gratitude. It also means the One, ultimately loved with obedience and surrendered to with adoration.

There is no plural of this word; and there are no masculine or feminine forms of it because Allah is one; and He is transcendent above genders.

The second attribute is “Al-Rahman” (the Most Merciful). This, Muslims believe, is the most exclusive name of God after His name Allah. It is a superlative from the adjective “Al-Rahim“, which means merciful. It comes right after the proper name in the basmalah to assert this quality of His. Allah Almighty said:

The third attribute is the Most Beneficent, “Al-Rahim“. It is in the adjective form; and it is here not only to emphasize the quality of mercy, but also to assert the incapacity of any language in truly describing the essence of Allah, while affirming all of His sublime names and attributes and inviting man to ponder over them.

Moreover, the adjective “Al-Rahim“, when mentioned next to “Al-Rahman“, adds different shades to the quality of mercy, all of which will enable humans to grasp as much as they can of this beautiful attribute.

A Muslim is required to pray five Prayers daily, which are made of a total of seventeen units called “rakahs“. In each of those units, he must recite the opening chapter of the Quran. Those two descriptions of mercy are repeated twice in each unit of Prayer, first in the “basmalah“, which directly precedes the opening chapter, and again in the chapter itself, which means Muslims have to actively remind themselves of Allah’s mercy at least 68 times per day.

Those names mentioned here are some of Allah’s most beautiful names. Among the other names of Allah are the Living One and the Subsisting, in Arabic “Al-Ḥayy Al-Qayyum“, the Definitive Truth, or “Al-Ḥaqq“, the Compassionate, in Arabic “Al-Wadud“, and many others, with a total of 99 names. 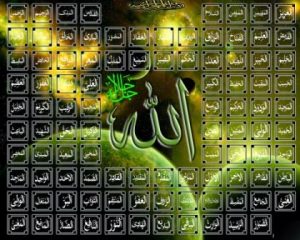 In a broader sense, Muslims start their endeavors by mentioning the names of God, since we believe that He is the source of all things; and to Him will return everything. He is the First and the Last; and He is the origin of life and the creator of all things.

He is not only the Creator of all things, but He is the Sovereign over the entire existence, and the Disposer of its affairs. Help is to be sought from Him alone; and trust is to be placed in Him alone.

The belief in the oneness of Allah and in the absoluteness of His perfection brings peace to the minds of the believers and influences their view of life and its various dichotomies.

The various endeavors we pursue in this life need to be all connected together with one thread. That is the thread of devotion to the one and only God, who created life and death, poverty and wealth, day and night, war and peace, and health and disease.

A fractured approach to this life will fail to bring to humanity much needed contentment and serenity. They must be sought from the source of them all.