aaa
Q As-salamu alaykum. I have a question regarding hijab. As far as I know, nowhere in the Quran it is said that a woman must wear hijab or veil. It is a cultural thing and has nothing to do with religion. I learned this from my readings. Prophet Muhammad (peace be upon him) told ladies to wear hijab because he saw one of his wives flirting with another man. This information might be wrong so please forgive me for writing it. But can you please give me exact references and verses from Quran, where it says a woman must wear hijab. Thank You, Allah Hafiz.

First of all, I would like to quote the verses in the Holy Quran that speak of the hijab. Please see verses 30-31 in Surah 24 of the Holy Quran, which give the meaning of:

{Tell the believing men to lower their gaze and be modest. That is purer for them. Lo! Allah is Aware of what they do. And tell the believing women to lower their gaze and be modest, and to display of their adornment only that which is apparent, and to draw their veils over their bosoms, and not to reveal their adornment save to their own husbands or fathers or husbands’ fathers, or their sons or their husbands’ sons, or their brothers or their brothers’ sons or sisters’ sons, or their women, or their slaves, or male attendants who lack vigor, or children who know naught of women’s nakedness. And let them not stamp their feet so as to reveal what they hide of their adornment. And turn unto Allah together, O believers, in order that ye may succeed.}

See also verse number 59 in Surah, which gives the meaning of:

{O Prophet! Tell thy wives and thy daughters and the women of the believers to draw their cloaks close round them [when they go abroad]. That will be better, that so they may be recognized and not annoyed. Allah is ever Forgiving, Merciful.}

The above verses very clearly show that it is Allah Almighty Himself, Who commands the women to wear hijab, though that word is not used in the above verses. In fact, the term hijab means much more than the covering of the body; it refers to the code of modesty outlined in the verses quoted above.

Look at the expressions used: “Lower their gaze”, “be modest”, “not to display their adornment”, “draw the veils over their bosoms” “not to stamp their feet” etc.

It must be clear to any thinking person what is meant by all the above expressions in the Holy Quran. Women in the Prophet’s time used to wear a kind of dress that covered the head, but not the bosom properly. So when they are asked to draw their veils over their bosoms so as not to reveal their beauty, it is clear that the dress must cover the head as well as the body. And hair is considered by people in most cultures of the world – not only in the Arab culture – as an attractive part of a woman’s beauty.

Until the end of the nineteenth century, ladies in the west used to put on some kind of head gear, if not a cover for the whole hair. This is quite in conformity with the Biblical injunction for the women to cover their heads. Even in these degenerate times, people pay more respect to the more modestly dressed ladies, than to the scantily clad ones. Imagine a lady prime minister or a queen wearing a low-cut blouse or a miniskirt in an international conference! Can she command as much respect there as she would get if she were in a more modest attire?

For the above reasons, the scholars of Islam are unanimous that the Quranic verses quoted above clearly mean that women must cover the head and the whole body except for the face and the hands.

You quoted the allegation that the Prophet introduced the hijab, because he saw one of his wives “flirting” with another man. This is one of those baseless charges against Islam and its Prophet, coined by those who saw their fragile ideologies crumbling before the march of Islam.

Does the hijab prevent a woman from performing her day-to-day duties?

For one thing a woman does not normally wear hijab in her own house, so it shouldn’t get in the way when she’s doing housework. If she is working in a factory close to machinery or in a laboratory, for example—she can wear a different style of hijab that doesn’t have dragging ends. Actually loose trousers and a long shirt for instance lets her to bend, lift, or climb steps or ladders more easily, if her work allows that. Such a dress would certainly give her more freedom of movement while protecting her modesty at the same time.

However it is interesting to note that the very same people who find fault with the Islamic dress code for women do not find anything improper in the dress of nuns. It is evident that the “hijab” of Mother Teresa did not prevent her from social work! And the western world honored her with the Nobel Prize! But the same people would argue that the hijab is a hindrance for a Muslim girl in a school or for a Muslim lady working as a cashier in a supermarket! This is the kind of hypocrisy or double standards which paradoxically some “sophisticated” people find fashionable! 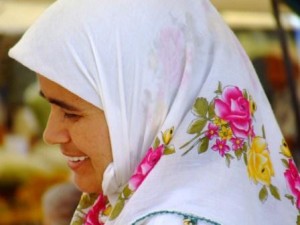 May Allah bless us and guide us to see the wisdom behind His commandments, so that we may follow them with more conviction!

Thank you again my dear sister for your precious question and please do not hesitate to contact us again if you have more questions on your mind. Please, always keep in touch.