aaa
Q Dear Respected Scholars, I am a non-Muslim female, who has been studying Islam for a few weeks. I have questioned some feminine issues dealing with the religion/lifestyle in modern times. First, if women aren’t supposed to be with men in private (except for immediate family), how is it possible to conduct business and be an independent woman in the West? I am considering Islam, but I can see a conflict arising with my autonomy because I have set many goals for the next several years of my life, during college and afterward, my career. These years will definitely include interaction with men and a lot of hand shaking (which is not allowed?)! I also plan on travelling the world and experiencing other cultures, but it seems that Islam may not openly permit this. I do mostly everything for myself, and if I am not supposed to interact with the opposite sex, how will I go about getting my oil changed or conducting research in a laboratory?As a young prospective Muslim, I am also a bit curious on how teenage Muslims practice their faith in the West. I have known a Muslim girl for two years through public high school outside of Chicago, and I had never seen her exit class to do her prescribed prayers. I also had the chance to participate in a state competition with her, where I was her roommate for three days. During that time, she never stepped aside from our activities to pray. She also did not wear her hijab (headscarf) during the competition (which included boys) because of the unfamiliar location and people’s initial attitudes after September 11th. I am a bit confused, because I thought that there were no special circumstances in which a Muslim could excuse his or herself from the prescribed practices of the faith (except for women during their time of menstruation). I also have read that prayers cannot be compensated for at later times in the day. Do you think that many Muslims in the West make the same sacrifices in college and in their careers as the girl I know? As I delve further into Islam and the practices of the faith, I find it very difficult to fathom how young adults of Islam behave properly among the mass media, school systems, and career structures in the West. I would very much appreciate your perspective on these matters.

I can understand your confusion and worries about what you have so far learned and observed about the life of Muslim women. The fact is that there are many shades of opinion among Muslim scholars about the limits to be observed by Muslim women.

There are many Muslim women who go out into the workplace with or without a headscarf. They do their jobs like anyone else, yet manage to fit in their prayers and interact with the opposite sex in a straightforward and businesslike way, which prevents any improper or unIslamic relationships.

However in some Muslim countries I understand the society is structured so that women interact only with women, when outside their homes, and whole sectors evolve, staffed by women, to deal with the needs of women.

Not all Muslim scholars forbid handshaking with the opposite gender. This is so long as it is perfunctory and has no sexual overtones. Personally, I will not offer to shake hands, but if a man offers his hand in a businesslike, formal gesture, I will shake it, rather than causing offence by refusing. If a man gets more physical, though, I try to avoid contact with him, and make sure I am not left alone with him.

Some Muslim women feel able to explain to non-Muslim men that they do not shake hands, but although I admire their firmness, and think it would be educational to do this, I would find it intrusive and alienating in most situations. One has to strike a balance one feels comfortable with.

These guidelines are only to protect women (and men) from sexual harassment and improper relationships. The many Muslim men I work with can be trusted not to behave improperly towards women colleagues, as they know the limits set by God.

Likewise the attitude to prayer differs widely among even practicing Muslims, with some considering it a private matter, to be fitted around daily life in an unobtrusive way, whereas others insist on provision being made in the school or workplace for the Muslims to pray, and yet others preferring, if possible, to work within a Muslim environment with other Muslims who understand and recognize their need and obligation to pray and wear a headscarf, whatever work is offered, rather than compromise their religion in order to take a secular job for which they are qualified.

As a point of fact, there is a lot of latitude in the time periods during which each prayer is valid. Usually it is only the zuhr (midday) and asr (afternoon) prayers that fall within a working day. In mid-winter, the maghrib (sunset) prayer in some parts of the world falls within the working day, and this might sometimes be inconvenient, particularly for students. However if you necessarily need to combine maghrib and isha (evening) prayers during the evening, you will need to consult a scholar of fiqh (submit your own request for a fatwa on particular circumstances of concern through this link).

If you try wearing a headscarf, as some non-Muslim American women did after September 11th in solidarity with Muslims, you will find out how difficult this seems in a hostile environment. Most of the Muslims reporting abuse and attacks after September 11th were women in a headscarf. In many ‘Muslim’ countries the authorities are so westernized and secularized that you can’t go to university or get a government job if you wear a headscarf. I am even told, long before September 11th you could be arrested on suspicion of being a terrorist just for praying too much. 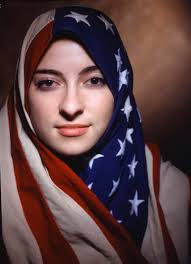 Now that this attitude has become openly expressed in the West as well, where many of these Muslims have come to study without such restrictions, and in view of the numerous arrests without charge of Arabs in the West, I am not surprised some women are taking off their headscarf in some places so that they feel less conspicuous.

Perhaps you should ask your friend for her reasons. The danger for Muslims living in the West and in westernize
d Muslim countries, is that they compromise their religion so much that they lose it, and the invaluable guidance it contains, completely.

However much they try to fit in, though, it does not stop others discriminating against them because they are from a Muslim background. Some of the Muslims in Bosnia practiced their religion so little that they could only be distinguished by their names, but that was enough to get them killed!