There is an old ridiculous fallacy, that Muhammad (peace and blessings be upon him) copied the Bible, a fallacy copied from some ignorant Arab pagans against the Prophet during his lifetime. They were stunningly challenged by the grandeur of the divine revelation.

To face the challenge, they strived hard to push away the coming light that was gradually penetrating the Makkan society and radiating outwards to Arab tribes coming to Makkah for trade or pilgrimage, threatening to penetrate the Arab Peninsula and the whole Middle East and world, and engulf their absurd beliefs and challenge their tribal sovereignty to extinction.

Closing their ears and minds from hearing and accepting the Quran, and being also ignorant of the Bible, the nearest forgery to proclaim was that the Quran was being borrowed from the Bible or some Biblical source. However, at that time, Christianity was almost totally out of the scene of Makkah.

In the Arabian Peninsula, Christian presence was confined to three locations: among the tribes of Al-Heerah in the northeast near Iraq, the Roman-occupied kingdom of Bani Ghassan in the northwest, and the Abyssinian reign of Yemen, far away from Makkah. Jewish presence was mainly in enclave settlements in and around Madinah.

Makkah being devoid of any real source of Biblical information, the pagans of the time could find no better candidate than a non-Arab Roman blacksmith boy earning his living there.

They claimed that he was the source of the Quran, dictating it to Muhammad (peace and blessings be upon him) out of his meager Biblical education! The mockingly fabricated fallacy soon faded away among the pagans themselves.

Years later, in the peak of the fierce hostilities of the Jewish tribes of Al-Madinah, and amidst their repeated attempts to defame the Prophet, spread rumors and work out plots to eradicate Islam, no such claim (i.e., that the Quran copied the Bible) was ever raised.

On the contrary, the Jews were keeping their scriptures away from the Muslims, especially those prophesizing and supporting the new message.

It is also significant that there was no single Arabic translation of the Bible till the tenth century CE, i.e., three centuries after the Prophet’s death. The available texts of the Bible were either in Syrian, Greek, or Hebrew.

If the Prophet (peace and blessings be upon him) could have any direct access to the Jewish or Christian Scriptures, he would have quoted them, being in dire need to challenge his opponents.

The only other reported encounters of the Prophet with Christian sources were on two occasions. At the early age of twelve, during a trip with his uncle Abu Talib among a trade caravan to Ash-Sham, they casually met Baheerah, a Syrian monk who reportedly could identify in the boy Muhammad (peace and blessings be upon him) signs of expected prophethood foretold in the old scriptures.

Similarly, when the Prophet (peace and blessings be upon him) received the first few verses of the revelation, his worried wife Khadijah brought him to her relative Waraqah ibn Nawfal.

Being a Christian convert with some knowledge of the Hebrew Scriptures, he assured the Prophet that the revelation he received was genuinely divine. Waraqah passed away shortly thereafter; the revelation continued for 23 years. 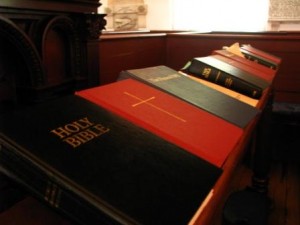 Now let us examine the two texts, the Quran and the Bible. The Quran was revealed over 23 years in installments to match multitudes of events, issues, and queries, which were finally compiled into surahs, each having a homogeneous flowing narration.

On the other hand, the Bible is a collection of 58 (plus 16 disputed) books written by several human authors and groups. These books were originally not intended to be holy scriptures, but were selectively made so by the ecumenical councils of the Church, several centuries after Christ.

An academic or even casual hand-on examination by an impartial sound intellect could never fail to witness the deep contrast between the superb text and context of the Quran, compared to the fallible human texts comprising the Bible books.

Further, the Quran has vehemently unveiled the Christian and Jewish distortions of the original messages of Moses and Jesus (peace be upon them). The original Injeel and Torah are no longer available. Please read, for example, the Quranic correction and reply to the Biblical distortions:

Could a copy (i.e., the Quran, according to the allegation) correct the claimedoriginal (i.e., Bible)?

Knowledge-wise, the Quran was proven to refer to and be precisely compatible with facts of science evolving over 14 centuries, a living proof of the authenticity of the Quran. This is contrasted to contradictions between the human Bible and science.

Again, could the Quran “learn” from the Bible?

There are, of course, points of agreement between the Quran and the Bible, e.g., the main aspects of the stories of prophets. That is natural as far as the original source of information being the same, divine revelation of Allah through His Messengers teaching essentially the same message. But here again, in the stories of the prophets we witness the profound differences between the Quranic narrations and those of the Bible.

Compare for example: the story of Prophet Joseph in the Quran (12:4-102) and the Bible (Genesis 37-45). Here, the brief to-the-point yet lively objective Quranic narration to emphasize advice and exhortations can be contrasted to the marginal details listed in the lengthy “once-upon-a-time” style of the Bible.

While the Quran gives due respect and reverence to the prophets as Allah’s chosen inviolable human beings, radiating His guidance to their contemporaries and future generations, the Bible frequently portrays them dishonorably. Consider for example:

Once again, could the Bible be the “source” and the Quran the “copy”?

In recent times, Christian missionaries and Orientalists, disguised in the cloaks of scholarly research, reproduced the same old thwarted fallacy of the ancient pagans and strived to spread it among the naïve and scantly-educated Muslim masses.

The targeted audience are those sectors unaware of the real nature and context of the Bible (as a collection of human works with all the ensuing defects) and, more importantly, are ignorant of their own inimitable Book, the Quran.

I hope my answer is satisfactory and informative.

Thank you again for your question and please keep in touch.