aaa
Q How would you respond to someone who says, "I don't see the wrong in drinking as Jesus himself drank, when he turned water into wine?"

Argument Based on Assumptions

As with many such arguments, it is based on the assumption that something is true, in order for the argument to make sense.

In other words, it is assumed as fact that Jesus drank wine because it says in the Christian Gospels that he did so.

If, however, such a thing is not accepted as a fact, then the whole argument falls down. There is no mention in the Quran of Jesus (peace be upon him) drinking wine, so Muslims have no belief that he did so.

Christians, for example, will tell us that Jesus died on the Cross. In the Quran we are told that:

The Quran does not contradict itself. How could Almighty Allah make mistakes? If we read in many places that it is forbidden to drink alcohol and any intoxicants, then it would be a contradiction to believe that Jesus, one of the Prophets of Islam, did something which was forbidden.

Even if he had drunk wine, although there is no suggestion of this in the Quran, then the final revelation to Muhammad which came after Jesus makes it clear that alcohol is forbidden to Muslims.

This point about where we get our sources from is very important. The four Gospels chosen by the early Christian Church were chosen from amongst many others which had been written. There were Gospels, for example, by Peter, Judas, Mary Magdalene and many others.

The four chosen by the Church were the four which they believed best delivered their message. Consequently, all Christian teaching is derived from these four Gospels, as well as some other books of the New Testament and as well as the very strong influence of Saint Paul, who wrote his letters before these Gospels were written.

Muslims, on the other hand, do not use these sources to base their faith. They use the revelation found in the Quran.

Muslims believe that the revelation given to all former prophets is no longer to be found in its original form. The Torah revealed to Moses, for example, became corrupted over time either through repeated translations or by the deliberate altering of the text.

Muslims believe that the Gospel revealed to Jesus is not the same as the four Gospels which exist today. The Gospels, as we have said, were chosen from amongst many and in many places they say things which contradict each other.

In other words, neither the Torah nor the Gospel can be relied upon as reliable sources. Why is this? It is because both the Torah and the Gospel were revealed to a specific people at a specific time in their history.

The Quran, though, was revealed for all people and for all time and that is why Allah has not allowed it to be corrupted through translation or any other means.

To say to a Muslim, then, that Jesus says such and such, because it is recorded that he says it in the Gospels, is not an argument that will convince them. Muslims believe that the only reliable record of anything Jesus said or did is to be found in the Quran. 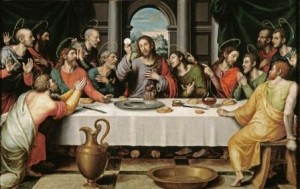 The Quran relates many things about the life of Jesus. It says that he was born of a virgin called Mary, that he spoke from the cradle, that he performed miracles and that he was sent as a Messenger to the Children of Israel.

It does not tell us that Jesus turned water into wine or that he drank wine. The most we have which comes near to the Last Supper or to the account in Saint John’s Gospel of Jesus turning water into wine at the Wedding at Cana in Galilee, where Jesus asks that a table of food be sent down:

Muslims base their belief, then, not in the scriptures of other religions, but on the teaching of Almighty Allah in the Quran, which was revealed as the final Word of Allah to mankind.

It must be understood that whatever Allah tells us is forbidden is something which is not good for us.

We do not need to have reasons, since the Word of Allah should be enough for us to want to obey His will, but we can understand the command about alcohol because it makes sense.

Why Is Alcohol Forbidden?

The command is delivered in stages, as if to allow its importance to sink into the lives of the early Muslims.

Drunkenness was a very common occurrence in the whole Arabian Peninsula during the time of Muhammad (peace be upon him).

At first, the Muslims were told in the Noble Quran that they should not turn up drunk for the prayers in the mosque:

{O ye who believe! approach not prayers with a mind befogged, until ye can understand all that ye say…} (An-Nisaa’ 4: 43)

At a later stage, another revelation was received which told them that there was some good to be found in alcohol, as people would tell us today, but that this was outweighed by the bad:

{They ask you concerning alcohol and gambling. Say: ‘In them is a great sin, and some benefits for men, But the sin is far greater than the benefits.} (Al-Baqarah 2: 219)

Finally, a verse was revealed to the Muslims in Madinah which totally forbade alcohol: 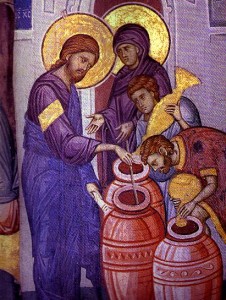 So you see, then, Almighty Allah weaned the Muslims off alcohol and all intoxicating substances because it was not good for them.

To this day, Muslims refrain from alcohol for the very same reason: it is harmful to put drugs into your body that make you unable to control your senses. They do not take alcohol all the more, though, simply because Allah commands that they should not.

I hope that this answers your question and shows that Muslims do not rely upon the teachings of other religions to determine what they do.

Whilst some may believe that Jesus turned water into wine and drank of it himself, Muslims do not believe this.

Consequently, they cannot use such an argument to persuade them that drinking wine is OK, since the Quran very clearly tells them that it is not.