Allah has not honored any other night more than the Night of Al-Qadr. So what is it that Allah says about this grand night? This is a short run-through the chapter with the aim that we can make the best of this night, insha’Allah.

The greatest of night is greatest because of this one major reason— the Quran was revealed in it! When the world was in ruin, corruption was rife, society was getting destroyed, a man called Muhammad lived in the middle of the desert. He was a man who was disillusioned by all that was going on. He started seeking solitude in the cave of Hira for a few nights at a time. It was on one of these nights that Allah decided to reveal the Quran.

Without any exaggeration, this was the greatest night in the history of humankind. It was the night that Allah, The Owner of Majesty and Honor, the Most Powerful, the Most High decided to send His own words down to this world.

From above the seven heavens He sent down what is described as “guidance and mercy”. 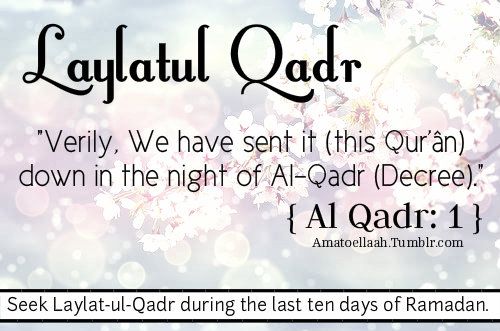 All that we have today, all that we do of prayers, charity and any other goodness, has its root in that fateful night of Al-Qadr many many years ago.

That night Allah sent a message that turned the war-mongering Arabs into the greatest generation of humans that ever walked the face of this earth. It is this night upon which over one and a half billion Muslims today base their faith on. The night that was the start of all good that we have.

That was the Night of Qadr. This Quran is what is called “mau’idha” in the Quran. “Mau’idha” is defined by Ustadh Nouman Ali Khan as “heart penetrating advice.” It is the night which changed the course of history.

2- And what will tell you what the Night of Qadr is?

This verse is powerful in that Allah shows us that we do not know. Just like He taught us so much, He is also the only One who can tell us what the Night of Qadr is all about. Allah repeats the wording of “Night of Qadr” again in the second verse. This shows us the importance of the Night as well.

3- The Night of Qadr is the Night which is better than a thousand months!

Never in the whole of the year do we get such an opportunity. A thousand months equals more than 83 years! Most people today do not live that long anyway (life expectancy for most countries like between 55-65). Allah out of His Mercy is giving us a chance to earn the rewards of 83 years of worship by just worshiping Him for ONE night! Could it be any easier than this?

So the worship that we must try and put into our routines for the last ten nights are as follows:

Some scholars said that the word “thousand” is actually a metaphor for “a lot” and it is actually even more in reward! Allah is indeed Most Generous and that could very much be the case! If we look back at the impact that this Night of Qadr has had on civilizations everywhere, we do understand how it is indeed so special!

There is only one thing that the Prophet said can change Divine Decree, and that is dua! So what better time to make dua than on the Night that all the Decrees are sent down?

Also the Majesty of this Night is confirmed in the fact that even the Archangel Jibreel descends on such an auspicious night. It is the night that thousands and thousands of angels descend on to the Earth. It is our chance to make more and more dua, more and more worship so that we may maximize from it!

5- Peace it is until the emergence of dawn

The ultimate end of our faith is peace and tranquility of the heart- here and hereafter. That is what Laylatul Qadr is. It is a night of peacefulness and mercy. The Night of our Lives. It is the Night that can get us forgiven for every sin we have committed. The Night which can guarantee us a spot in paradise.

With so much differences of opinion on when Laylatul Qadr is, the best for us to do is to work on every single night of the last ten Nights insha Allah.

Let us not lose out on the greatest opportunity that Allah has presented us with. Let us make the best of the last ten nights of Ramadan, and earn Allah’s pleasure and paradise! O Allah accept from us.