Why does the gaining of otherwise beneficial knowledge cause so many people to become so cold and judgmental? How do these people end up on that path in the first place?
aaa

Great men and women become greater when they are put in a position of power. But, gaining a high level of knowledge and being elected to positions of power create- as per human fallibility- a vacuum in the soul of a person whose heart is not pure. This vacuum drives them to seek out the respect and esteem of other people, whatever the cost to their own souls. But, as the great “scholar” Spiderman quotes: “With great power comes great responsibility.”

Perhaps no group received as much direct and indirect criticism from our Prophet Jesus (peace be upon him) than the religious leaders of his day, the Pharisees. They got flack from him left and right. In the book of Matthew in the New Testament, Jesus was reported to have said:

“Woe to you, teachers of the law and Pharisees, you hypocrites…you have neglected the more important matters of the law—justice, mercy, and faithfulness…You strain out a gnat but swallow a camel. You clean the outside of the cup and dish, but inside they are full of greed and self-indulgence…In the same way, on the outside you appear to people as righteous but on the inside you are full of hypocrisy and wickedness…“You snakes! You brood of vipers! How will you escape being condemned to hell?” (Matthew 23:23-33)

Whoa! That’s some serious allegations. And the main reason? They were hypocrites. They attacked the common people for small mistakes while they themselves harbored much more serious sin in their hearts, sins like pride, arrogance, and, yes, hypocrisy.

But why is it so common in all religious groups that we find such a high rate of these sorts of ugly characteristics in the religious leaders, the very people who are chosen to represent their faith and lead others as an example? Why do these men and women so often find themselves embroiled in public scandal and personal drama because of their choices which contradict their messages from the pulpit and the minbar?

I had a great friend a few years ago during my time living in Egypt who was a very strict Muslim. During that time, I was also a very strict Muslim, but there came a time when our relationship soured because I felt that she only had negative things to say about other Muslims, but would not consider the opinions I had about her practice, nor accept criticism, and she felt I was straying from the ‘right path’.

Eventually, though, her life began to change for the worse and after some hard life experiences in that Muslim country, she decided to research her ideas further. She spent a good, long time studying and scouring Arabic texts and English commentaries and ultimately came to the conclusion that her original beliefs were not the only valid opinion.

Later, when I moved to Alexandria, away from the rural area I previously lived in, I was so excited to be finally living near other foreigners. I met people from all over the world, and the overwhelming majority of them were very, very religious. But, I felt more foreign and isolated there among these foreign Muslims than I did among the Egyptian Muslims in the village. 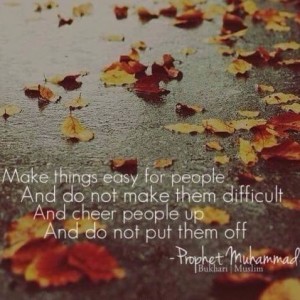 I felt like everything I liked all the time was haram (unlawful). It seemed as if everyone around me was living on a higher and holier dimension than I was, but they didn’t seem to scrutinize their own lives the way they scrutinized everyone who was not like them.

Many of these women had memorized the entire Quran, and most of them studied for hours every week in various mosques and under various sheikhs. But they were far from perfect.

Many of them loved to sit and gossip about their sisters and brothers in Islam, always behind the veil of ‘warning’ one another about the ‘unsound creed’ of so-and-so. They felt a responsibility to point out every single sin in the lives of everyone, both behind their backs and to their faces. They often said thinly-veiled judgments and insults such as, “may Allah guide you to the right path” when someone disagreed with their point of view.

They practiced the letter of the law to such a strict degree, but totally lost the spirit of the law.

I left that town and that country with such a distaste for (what I thought was) Islam, a feeling I had not known since before I embraced Islam six years before. I felt that I could never measure up to those women, and why should I try when their level of dedication made them cold, unfeeling, and cruel?

The spirit of Islam is mercy and compassion, as embodied by our Prophet Muhammad on countless occasions, as he said:

So why does the gaining of otherwise beneficial knowledge cause so many people to become so cold and judgmental? How do these people end up on that path in the first place?

Many of us, as Western converts, were raised in Christian households, where religion was merely a collection of ceremonies and outward rituals done regularly, with almost no spiritual emphasis or benefit.

So upon entering Islam, when so many of us lose friends and family, jobs and social connections, it only makes sense for us to continue this trend of strict religiosity with little focus on spirituality. After all, why lose so much for Islam and then practice it in a ‘half-hearted’ way? It is with sincere intentions we so often cling to such a strict interpretation of the religion.

If we feel ourselves inclined toward extremism, the first step is to apply the knowledge we are gaining to ourselves first.

As is so often the case in these situations, balanced Islam saved my friend from her extremist practice of Islam. What happened to make her adjust her thinking? She came across a hadith of the Prophet Muhammad (peace be upon him):

“Verily the most detested speech to Allah, the Mighty and Majestic, is that a man says to another man ‘fear Allah,’ so the (other) man says: ‘Leave me alone!’” [In another narration, he says: “Worry about your own self.” (Authenticated by Al-Albani)

Her initial interpretation of this wisdom was common to her circle of friends:

“Oh, I need to show that hadith to so-and-so! They are straying from the right path!”

But after some time of soul-searching, she realized that she herself needed to heed the advice from this hadith.

She had come to a point that any criticism, however correct or kindly given, was immediately shot down by her ego and never got the chance to reach her heart. It took much self-evaluation and tons of self-control, but she was able to begin a journey of moderation and balance.

If we feel ourselves inclined toward extremism, the first step is to apply the knowledge we are gaining to ourselves first. We shouldn’t ask ourselves who we know that could benefit from this wisdom. We must look in the mirror and see the first person– and only person– we will have to answer for on the day of judgment: Ourselves.

Don’t forget that every time we judge someone and insult them or backbite them, we are handing them our good deeds on the Day of Judgment. Good intentions cannot justify bad actions.

Ultimately, the way to attain balance in one’s practice of Islam and to be sure one is not focusing too much on action or spirituality, is to acquire sound knowledge from sound sources. The real Islam is one of moderation and balance. And we have to always remember: Too much fear of Allah chokes out our hope in Allah’s mercy.

I leave you with this beautiful quote, which my friend shared with me:

“The heart on its journey towards Allah the Exalted is like that of a bird. Love is its head, and fear and hope are its two wings. When the head is healthy, then the two wings will fly well. When the head is cut off, the bird will die. When either of two wings is damaged, the bird becomes vulnerable to every hunter and predator.” (Ibn Al-Qayyim, Madarij As-Salikeen)