That’s the nature of arrogance: it causes us to judge others while it secretly stokes the flames under our feet.
aaa

Often, when we are in spiritually dark times in life, we find ourselves easily capable of seeing the flaws in others.

Some years ago, I was in such a dark place inside. Driven by my inner pain, I looked around me with x-ray vision at the flaws and faults of the people around me, too terrified the face the faults I had inside.

One such person was my mother-in-law. Though an old woman, she was strong and dedicated to helping and serving her many grand-children. People were always bustling in and out of her home, and she always had a meal and a hot cup of tea for anyone who crossed her threshold.

However kind she was, she was also old and the hard work she did daily made it impossible for her to stand in prayer, so she sat in a chair when she prayed. She would bow herself mid-way for ruku and then further down for sujood. I began to notice that there were times she would make more than 2 sajdahs and pointed it out to my husband. He tried to talk with her about it, but she insisted she thought she was doing it correctly.

Judgment for this poor woman burned in me, because kind as she was to others, she did not treat me personally with kindness. I allowed my anger over what she was doing to me create an arrogant spirit in me.

Fast-forward several years and I am a mother of many children myself now, divorced from her son and re-married. I have much to do every day, and my mind often finds it difficult to settle enough to really focus on my prayers. Add in a broken ankle, and there are times when I must sit in my prayer. And wouldn’t you know that I have caught myself often unsure how many rak’ahs I have prayed, and how many sajdahs I have made?

That’s the nature of arrogance: it causes us to judge others while it secretly stokes the flames under our feet.

In an excellent talk by brother Abdur-Raheem Green, he cites an example of a time he and some brothers were sitting together during a retreat and one commented that so-and-so never wakes up for the Fajr prayer. Brother Green spoke of how he began to feel judgmental toward this brother regarding his lack of dedication to the Fajr prayer, what with all its wonderful blessings. He felt haughty inside at being a much more dedicated Muslim because he almost never missed Fajr.

Some weeks or months later, he noticed a terrible thing happening: he found himself unable to wake for the Fajr prayer, regardless how many alarms he set or people he asked to call and wake him, and this afflicted him for several years later. He says he is sure that the reason for his sudden inability was a direct punishment from Allah for his judgment of the brother he saw so many years before. 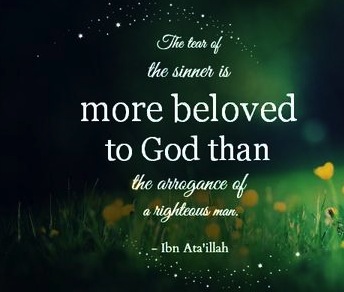 If we are humble and honest with ourselves, we will see that many of the ways we judge others are a direct cause of the hardships we ourselves face. Absolutely none of us is immune to sin, and God has used our sin, time and time again, to remind us that we are not better than anyone else.

Humility means recognizing that you, were you put in the exact situation of a person with the exact circumstances and the exact upbringing in his or her exact family, the chances of you having chosen to do differently than he did are slim, if any.

Imagine you see a homeless man on the street. He is dirty and hasn’t bathed or shaved in what must be weeks. He smells terrible and you even catch a hint of alcohol on his breath. Now, sit with him and hear his story, and 9 out of 10 times you will hear one of heartbreak, loss, financial ruin, devastation, illness, and death.

Perhaps his daughter’s cancer treatment entirely drained his income and the strain of losing her destroyed his marriage. Then, the bank came for his house when the payments stopped, and all the people he thought were friends just didn’t have room for him in their homes in this individualistic society.

As much as you could say, “yes but drinking is haraam”, were you in his shoes suffering what he suffered, living through the death of your child, the loss of your spouse, the destruction of all you worked your whole life to build, raised in the society he was raised, you absolutely cannot say you would have made a better choice than this man made.

Absolutely none of us has the right to assume we are better than the next person. If we are able to keep ourselves from sin, this is a blessing from Allah, not of our own strength or fortitude. If we are able to seek forgiveness from Allah, this comes only because Allah has granted your heart the feeling of remorse and regret.

Prophet Muhammad told his companions that:

“No one of you will enter Paradise by his deeds alone.”

They asked, “Not even you, O Messenger of Allah?”

If our own Prophet could not say he had earned Jannah with his good deeds (peace and blessings be upon him) how much less do we have the right to act in arrogance, assuming that our good life and blessings are because of our uprightness?

Now, I am not saying we shouldn’t point out wrong when we see wrong. Absolutely we have a responsibility to either change evil with our hands, our words, or to hate it with all of our hearts. But hating a sin and thinking you are better than the one committing it, or worse, that you yourself would never, not ever, fall into that same sin are two very different things.

Let us not test Allah by assuming that we, given the same circumstances and frame of reference of the next person, would choose better than they did, else we may in fact be given those exact circumstances to prove to us the ultimate truth: the person you see sinning is absolutely human, no different than you or I, no better or worse, flawed and beautiful creations of Allah, given the blessings and the hardships of life, just as we are, and prone to error, just as we are.