When I was 15 years old, I was an evangelical Christian.

I attended church twice a week, at least, was the head of the youth group, sat in committee meetings with the church board when they discussed the youth situation, and headed the worship band every time we gathered for worship.

During that time in my life, music was my whole life, as I was training under a semi-professional choir director. I played various instruments and sang. So it only made sense that I try out for the big youth choir that traveled my state. When I was accepted into the choir, I felt so grateful to God that I had the chance to worship him in song.

But night after night, church after church, I began to notice something which disturbed me deeply: every night, without fail, when the leader of the choir would beckon any who were interested to come forward and cry to Jesus for forgiveness, the same few teens would fall on their faces in front of the rest of us and weep. Another teen, or several, would come down from the choir stands and sit with each person, comforting them.

Then I began joining the group, and initially it was out of sincere reverence and repentance. Soon, though, when I felt entirely blasé, I would still feel the urge to sit down in front of the church and seem very sad, if only because there was pressure from within the choir to do so, so as to encourage the people watching the worship choir to do the same.

After some months, I noticed the lack of sincerity in my heart, and I noticed the pride I had developed at being part of this prestigious choir, and I decided to step down. I could not handle the feeling that I was more interested in people believing I was pious than actually being pious.

Lest we become prideful, Allah and His Prophet Muhammad (peace and blessings be upon him) reminded us of this reality often: that people have the tendency to begin to care very much for the opinions of others at the expense of the pleasure of God.

The name for this sin is riya’, or showing off, and it’s a form of minor shirk. 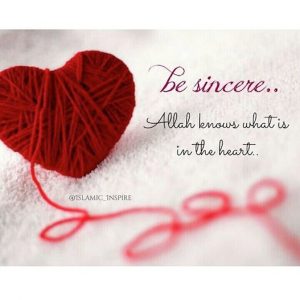 Allah says in the Quran: {So woe unto those performers of Salat (hypocrites), Those who delay their Salat (from their stated fixed times). Those who do good deeds only to be seen (of men). And prevent Al-Ma’un (small kindnesses)} (Al-Ma’un 107: 4 – 7).

But, more moving than these verses is the story in a hadith Qudsi (a confirmed saying of Muhammad which Allah told him to say).

“…on the Day of Judgment, Allah, Most High, will descend to His slaves to judge between them. Every nation shall be kneeling. The first of those who will be called before him will be a man who memorized the Quran, and a man who was killed in Allah’s cause, and a wealthy man…Allah will say to the wealthy man: “Was I not so generous with you that I did not leave you without any need from anyone?”

He will reply: ‘Of course O Lord!’ Allah will ask: “Then what did you do with what I gave to you?”

He will say: ‘I would nurture the ties of kinship and give charity.’

Then Allah will say to him:

“You have lied. Rather, you wanted it to be said that so-and-so is so generous, and that was said. (meaning that you wanted to get appreciated and that’s what happened.)” (At-Tirmidhi Vol. 4, Book 10, Hadith 2382)

That’s right: someone who spent his money in charity will be dragged into the hellfire! For what sin? Riya’: working to worship Allah only so that people will say you are good, pious, and righteous.

The Prophet Muhammad (peace be upon him) also said:

“If anyone wants to have his deeds widely publicized, Allah will publicize (his humiliation). And if anyone makes a hypocritical display (of his deeds), Allah will make a display of him.” (Sahih Muslim Book 42, Hadith 7115)

We cannot, must not, allow our work for God to overcome our love for God.

We cannot allow our dawah efforts to distract us from our religious obligations.

We cannot become so wrapped up in spreading the message of Islam that we forget to apply to our own lives.

We cannot confuse the means of pleasing Allah with the actual end, which is Allah’s pleasure.

Just as I stepped down from that worship choir because I could feel pride and riya’ growing in my heart, I have had to step back and re-examine my intentions lately as I have gotten more involved in dawah efforts.

Have you been missing prayers because you’re busy working on something “for Allah”?

Have you been forgetting to make du’a because you’re so busy asking others for help with your efforts?

Have you been more interested in the others in the masjid seeing you pray the extra prayers than in doing it in secret in your home, just for Allah?

We all must remember: we were created to worship Allah before introducing the message of Islam. When we please Allah, we become pleased with Allah, and the message of Islam spreads like wildfire because people see that we are a people of peace, joy, gratitude, serenity, and hope.