Looking at the face of Allah is the greatest blessing given to us. And that face has been described as Dhul-Jalal Wal-Ikram. His Face of magnificence, honor and nobility
aaa

The greatest blessing in Paradise is not things inside it, rather something more. Allah says:

What could possibly more than Paradise?

“when the people of Paradise have entered Paradise, Allah will ask them:

“O My servants, are you happy?”

They will say: “Yes, oh Allah we are”

Allah will say: “O my servants, is there anything more that you want?”

They will say: “What could we want more than this o Allah? Have you not caused us to enter Paradise, what more could we want?”

“Then Allah will lift the veil an they will look at His face and they will not be given anything better and more noble than the looking at His face. And this is the thing that is more than Paradise”

You’re being good to relative in order to see the face of Allah. Allah says:

{They’re being patient in order to see Allah}

And the Quran tells us that when we see the face of Allah, our faces will become bright and shining:

{On that Day, faces will be shining bright because they will be looking at their Lord}

And this shows us that looking at the face of Allah is the greatest blessing given to us. And that face has been described as Dhul-Jalal Wal-Ikram. His Face of magnificence, honor and nobility, why?

Because anybody who sees that face has been honored beyond anyone else.

We will not see the face of Allah in this world. Moses asked to see but Allah said “you don’t have the power”, that is something only in the next life.

In the Night of Journey, Jibreel said to the Prophet: 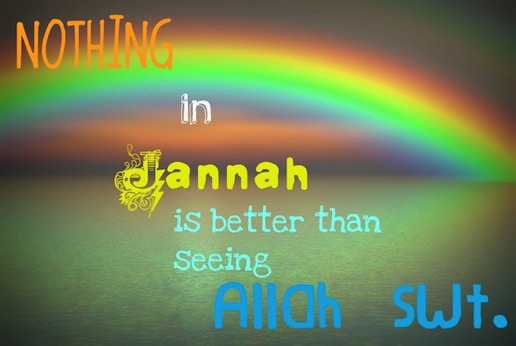 “Now you have to go on on your own, I’m not allowed beyond this point”

The Prophet went higher than any created being has ever been. Then when he came back down, Abu Dhar asked him:

“O messenger of Allah, did you see your Lord?”

“There was light everywhere, how could I see Him?”

What is this light?

The Prophet clarified in another hadith:

“Allah has taken a covering and His cover is light”

The hijab covers the beauty… and Allah’s hijab is itself a beauty and what is covered is beyond imagination, is beyond what the mind can comprehend.

“Allah’s hijab is light, if He were to lift that hijab, the rays of light that come from Allah’s face would destroy everything that it sees”