A person who recognizes their weakness and limitation will have greater humility instilled in them, their prayers and prostrations.
aaa

You may have heard a life coach saying: “You have the power to do anything without any limits- just believe in yourself.”

Yet, what continues to amaze me is that great leaders actually portrayed a different perspective. They had a profound understanding of the statement, “there is no movement or power except by Allah.”

Take for example, Dhul-Qarnayn, one of the kings of the earth, Imam Tabari relates about him from Mujahid:

This great leader was offered payment by a society to build a barrier between them, and Gog and Magog. Dhul-Qarnayn, a king of the earth, responds:

{That in which my Lord has enabled me is better [than what you offer], but assist me with strength; I will make between you and them a barrier.} (Quran 18:95)

Instead of ascribing might, skill, wealth, or knowledge to himself for the building of the barrier, he declares that he has been enabled by Allah.

What does he say after completing the project? Does he claim success because of his efforts? After building the barrier he proclaims: “This is a mercy from my Lord”. (18:98)

Sulayman was a Prophet King whose kingdom was so spectacular that none would ever have a similar kingdom due to his prayer:

{He said, ‘My Lord, forgive me and grant me a kingdom such as will not belong to anyone after me. Indeed, You are the Bestower.’} (Quran 38:35)

As a result, the jinn, the birds, the wind, and other kingdoms were subdued under his command. The laws of physics were defied when the throne of Queen Bilqis was brought to him in a blink of an eye. What does Suleyman say upon this accomplishment? He says:

Recognizing the favor of Allah was the way of great leaders. The Prophet Yusuf after being given dominion in the land said:

{“My Lord, You have given me [something] of sovereignty and taught me of the interpretation of dreams. Creator of the heavens and earth, You are my protector in this world and in the Hereafter. Cause me to die a Muslim and join me with the righteous.”} (Quran 12:101)

These great leaders reached greatness not because they thought they were great. Greatness was received because they embraced humility towards Allah. The Prophet Muhammad said:

“If one humbles themselves for Allah, Allah will raise him.” (Sahih al-Jami’- Sahih)

Fasting shows us in a matter of several hours how dependent, vulnerable, and weak we really are. The thirst, the headaches, the stomach growls all start to make an impact on our productivity especially towards the end of the day. 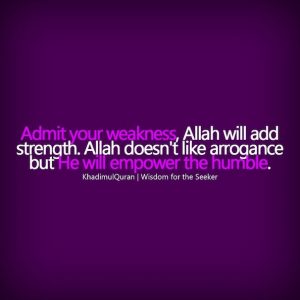 Fasting reminds us that we are not the provider, but the provided. Not the self-sufficient, but the very dependent.

This does not mean one should lay complacent wishing to accomplish goals without any effort. It means realizing that success comes only by Allah’s Power, not by our skills or doings, and at the same time being alert about available opportunities that would help reach our goals.

We see this balance in Dhul-Qarnayn’s statement where after proclaiming that Allah is the one who has enabled him, he took advantage of the available resources around him and said to the people, “but assist me with strength”. He enlisted those around him in the building project.

To know Allah, we must know ourselves- our limitations. The Pharaoh could not believe in Allah because he did not know himself. Declaring himself to be God, challenging the Creator, and trying to ascend to Allah were all actions defying his very human nature. As a result, he went down in history as one of the greatest rejecters of Allah.

Knowing that you can not go on without water, feeling your body start to become frail due to decreased nutrition as a result of fasting should awaken your consciousness of the Most Powerful, the Most High.

A person who recognizes their weakness and limitation will have greater humility instilled in them, their prayers and prostrations. The words, “Allah, You are the Self-Sufficient, the Rich and I am the weak, the destitute” will flow naturally from such persons.

We may be influenced to think that we on our own can accomplish goals due to our wit, strength, or just by believing in ourselves. However, Ramadan reminds us of who we are as human beings and our relationship with our Creator.

Recognizing our limitations is actually one of our strengths because through this recognition of dependency we develop a greater love and closeness to Allah.

By this, taqwa increases- which is the very purpose of fasting. It is with taqwa and the knowledge that nothing can be accomplished without the help of Allah that truly great things happen.