Islam teaches that we are all born into this life with pure spiritual hearts created to know Allah Almighty.
aaa

Not too long ago, my brother came over after lunch at a local deli with a bag of leftover potato chips.

It was salty, spicy, crunchy and delicious.

Pretty soon, I had finished off the whole bag.

I woke up the next morning feeling like my lips were on fire. They were swollen and red. Soon thereafter my tongue started to feel heavy and awkward in my mouth. The scariest part was when I realized I had lost my sense of taste. My tongue had become completely numb.

I wasn’t sure what was going on, but I hoped it would go away on its own. Days passed, then weeks, but little improved.

For five weeks, I put off going to the doctor. I kept procrastinating, hoping things would get better on their own. Then finally, I decided I had to be seen.

It turned out that I had developed an allergic reaction. Something had made my tongue get inflamed and become totally numb.

The doctor prescribed medicine for me and said that to help myself heal, I needed to be very careful about what I ate. She gave me a long list of foods to avoid that included acidic foods, spicy foods, and almost anything with flavor.

So I applied the medicine and followed her advice. With each bite I wondered silently to myself if I was ever going to be able to taste anything again.

Almost a month later I took a bite of banana and actually tasted banana. What a joyous day, Alhamdulillah (all Praise be to God)! My sense of taste was finally coming back.

Shortly after I had regained my sense of taste, I thought about the whole ordeal. The anxiety I had felt about never being able to taste was still fresh in my memory. I had seriously doubted if the numbness would ever go away.

Several beautiful hadiths talk about the sweetness of faith:

“Indeed the one who is pleased (and content) with Allah as his Lord (Rubb), Islam as his Deen and Muhammad as his Messenger has tasted the sweetness of faith (iman).” (Muslim, 34) 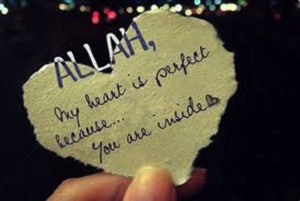 “There are three qualities by which he who is characterized (with them) will taste the sweetness of faith: that Allah and His Messenger are dearer to him than anything else; that he loves a person purely for the sake of Allah; and that he hates returning to disbelief after Allah has rescued him from it just as he would hate to be cast into the Hellfire.” (Al-Bukhari and Muslim, 375)

But what happens when our hearts no longer taste the sweetness of the faith? What causes them to lose this ability? What makes them numb?

Islam teaches that we are all born into this life with pure spiritual hearts created to know Allah Almighty. However, sometimes, along the way, things happen. Our pristine hearts get injured by something in our environments. How?

Our eyes, ears, and limbs all act like channels to our hearts. When they do things that are in harmony with what Allah has prescribed for us, our hearts find peace. They are spiritually healthy.

But when we look at, listen to or say and do things that are displeasing to Allah, our hearts are adversely affected. Then, with repeated insult, they become hardened, and over time, numb.

We may not realize it, but we are often surrounded by environments that can be very “toxic” to our hearts. A toxic environment might be one that contains things that are displeasing to Allah—a bar for example, or a club. But it can be much more subtle than that.

It can be hanging out with the wrong kind of friends, watching the wrong kind of shows, gossiping about people, or interacting with others or on social media in a way that isn’t mindful of Allah. Like acids, these environments slowly corrode our spiritual well-being.

How to Deal with a Numb Heart

When we find that our environments have adversely affected our hearts, most of us can recognize that something has changed. We sense that our iman is not where it used to be. We no longer taste the sweetness of faith and start to wonder if we ever will again.

Sadly though, rather than turn to Allah and revive our connection with Him, we do what I did when my tongue was numb: we procrastinate. We say to ourselves, “Oh, tomorrow things will be better,” or, “I’ll strengthen my iman this summer,” or “Ramadan is just around the corner,” but take little action to ensure that our situation will change. 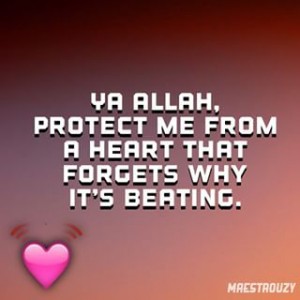 When things don’t improve, we ironically try to fill our spiritual void with things from the very environment that caused our hearts to fall ill. We distract ourselves with social media, movies and entertainment; we develop unhealthy relationships; some of us even get involved with substance abuse.

What we don’t realize is that turning away from Allah because we no longer taste the sweetness of faith makes just about as much sense as me not eating because I could no longer taste anything.

Case in point: the doctor didn’t tell me to stop eating. She just told me I had to be very careful about what I ate. She cautioned me against certain foods that would aggravate the problem I was already having. She also prescribed a medicine.

Rather than starve our hearts when we feel that they have become hardened or numb, we need to start by giving them the right kind of medicine.

Allah tells us that the Quran itself is a medicine for our hearts:

{O mankind, there has to come to you instruction from your Lord and healing for what is in the breasts and guidance and mercy for the believers.} (10:57)

The remembrance of Allah also helps our hearts heal, as do prayer and patience.

In addition to giving our hearts the right kind of spiritual medicine, we also need to be very careful about what we “feed” them. That’s where our environments become critically important.

One of the best things we can do to restore the health of our hearts is avoid that which is displeasing to Allah. This includes our physical environment and the actions of our ears, eyes, tongues and limbs.

We can also help ourselves by avoiding the company of people who bring our iman down. Being around people who continually push our hearts away from Allah will adversely affect us, whether we realize it or not.

Lastly, we should remember to be patient. If we are consistent in doing what Allah asks of us and avoiding what He prohibited, Allah promises to facilitate our affairs for us. He will give us the strength to avoid environments that are harmful to our hearts and help us find good company.

Our hearts will heal, even if right now we feel they are totally numb.

With the right care, they will taste the sweetness of faith once again.