Sometimes life seems just more than we can bear. Even for Muslims. We all have off-days, of course, when everything seems to go wrong, when we feel out of sorts.

No matter how regular we are with our prayers, those days come to us out of the blue, perhaps caused by a thoughtless comment from a friend, or perhaps we just didn’t get enough sleep the night before.

But there can be times in our lives when we really have had enough. Nothing seems to be right. We are unhappy.

Let us take the story of Mustapha, for example. Mustapha was having one of those days. Working as a waiter in a coffee house for very low wages was not usually enough to get him down. After all, the coffee house had its compensations.

Many of the customers were funny. The other waiters he worked with always had a joke to tell and a smile on their faces.

It was a job, after all, and he could take money home to his parents. That day, however, the jokes weren’t enough. He had had enough of being taken for granted by the owner and being treated badly by the owner’s son. Even the customers had been rude to him that day.

He didn’t have enough money to pay his bills and, even though it was the weekend, he had no money to go out with his friends. This is not what he wanted with his life, not why he had studied for three years in the Faculty of Commerce. Mustapha decided to quit the job and just walk out.

However, just as he was about to take off his apron and leave, one of his regular customers walked in and asked for a coffee. He was a kindly middle-aged man and was always very courteous to Mustapha and the other waiters. Even though he wore good clothes and obviously had money, he treated them with respect. 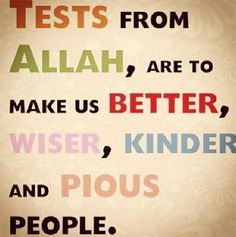 Mustapha knew that the respect he was being shown did not depend upon wealth or achievements. It was a genuine respect, just because he was another human being. Mustapha told him how he felt and that he just wanted to say goodbye before leaving the job, since he wouldn’t see the man again.

The man didn’t offer him sympathy, but told him what a fool he was. He had a job, hadn’t he? How would he give money to his parents without a job?

This job was surely better than no job at all. He should stay at least until tomorrow. If he felt the same way tomorrow, then he could leave.

Of course, the next day all seemed fine. To Mustapha, the other waiters seemed funny again. The sun was shining and even the owner’s son didn’t seem all that bad. Life was not that bad after all. There were lots of people worse off than him.

We have all been in Mustapha’s shoes, haven’t we? Events get too much for us. People seem not to care about what we want or how we feel. We are taken for granted at work. Even our work seems not to be what we want.  This is not what we had planned for ourselves.

There are other times, too, when we face a real crisis that threatens to crush us. We lose our job without warning. We become sick or someone close to us becomes sick. A friend or family member dies and leaves us alone for the first time in our lives.

Faced with tests people respond in different ways: falling into depression, feeling angry, or even questioning how Allah could allow this to happen to us. “What have we done to deserve this?” we ask.

We do not impose on any soul a duty except to the extent of its ability– they are the dwellers of the Garden [Paradise]; in it they shall abide forever. (7:42)

Almighty Allah never burdens us with more than we can cope with. It is good once in a while just to think about others around us in the world. When we compare the little things that make us moan and complain with the genuine heartbreak and tragedy that others face, we should really be ashamed of ourselves.

We get over even the worst tests in our lives. Although unbearable at the time, they pass and we can look back and learn from them. In fact, what had seemed a disaster can often turn out for the good.

Allah does not test us beyond our scope. If we were all to look back at our own lives, we would find the finger of Allah pointing us in a certain direction, and we would feel the gentleness of His hand guiding us through life.

There is an old song that talks about counting blessings instead of sheep. Sometimes, when we can’t get to sleep at night, we count sheep jumping over a gate. The routine and the monotony of the image can make us feel sleepy and it sometimes helps us to doze off.

Imagine, then, that instead of counting sheep we were to count the many blessings that Almighty Allah gives us. There are so many that we would be fast asleep before we could number them all.

There are, indeed, so many things in our lives to be thankful for. Life’s ups and downs can teach us many things. The real point is that we can become that much better and that much stronger by how much we learn from them.

As Muslims, we should try not to give in to those moments of doubt and unhappiness. At those times, especially, we can turn to Allah in prayer and pour out our troubles before Him. He knows about every leaf falling from every tree, so He knows what is troubling us.

At the end of each day, we can rejoice that whatever gets us down is not too much for Almighty Allah to solve. As Muslims, we can rejoice in those beautiful words of our beloved Prophet:

“There is neither strength nor power save in Allah.”