The Quran signifies to Muslims the source of their identity, strength, consciousness and cultural as well as civilizational being.
aaa

The Quran was revealed by Almighty Allah through Prophet Muhammad to mankind to bring them out of the disorienting and debilitating darkness of falsehood, ignorance and superstitions to the light and radiance of truth, guidance and proper erudition.

The Quran is the only means available to man by which he can communicate directly with his Creator, Master and Sustainer. No other alternative is left as all the previous Scriptures have been tampered with, corrupted or utterly lost.

This indeed is a hallmark of the Islamic message. Man needs no intermediaries of any kind — conceptual or physical — between him and his Master. The whole life affair is solely between man and Allah. Everything and everyone else stands for a secondary thing, playing second fiddle to that overwhelming relationship.

Man has been created but to worship and serve Allah. However, this by no means implies that man is to engross himself fully and exclusively in sheer religious rituals and spend most of his terrestrial time mainly in mosques or some other religious institutions and establishments. Indeed, such would be impractical, uninspiring and dull affair.

Rather, that means that man in his capacity, as Allah’s vicegerent on earth, is to live his life “to the fullest” but only according to the patterns and paradigms instituted by the Creator.

Man is to live his life not according to his own will, but according to the will of the Creator and Cherisher of life. Each and every creation is to submit itself only to its Creator, rather than other creations.

So imperfect, faulty and weak is man — and indeed every other creation — that he cannot be qualified for any of the tasks relating to the spiritual and existential lordship and self-sufficiency.

That said, Islam is not a religion in the sense Christianity, Judaism, Hinduism, Buddhism, etc., are. Islam is a complete way of life. It is a comprehensive lifestyle, culture and civilization. It is a form of total submission to the will, knowledge and guidance of Allah.

Islam is not a religion of mere words, slogans, or symbols. It is not a religion of an abstract philosophy, or a set of pure religious rituals. Islam knows no distinction between the spiritual and material spheres of existence along the ideological and ontological lines. To assert something like that is to distort the Islamic message and to live in the wrong.

Islam is a religion of sincere faith, actions and deeds. It is a religion of life accomplishments. Islam is life, and life, the way Allah created and predetermined it, echoes the quintessence and ethos of Islam.

The word “islam” which denotes a total submission to Allah through one’s acts, words and thoughts, clearly attests to it. Hence, there is nothing more thrilling, spellbinding, wholesome and rewarding than living life in the name of and for the Creator of the universe.

Submitting fully to and worshipping Allah alone means personal liberation, self-assertion and self-fulfillment in the truest senses of those words.

Islam therefore is to be lived, not practiced. True Muslims live Islam. Those who practice it are yet to experience the authentic beauty and sweetness of the Islamic faith.

Islam, it goes without saying, is not only about human existence, but also about each and every tier of the whole physical and metaphysical existence. It is its DNA, so to speak. 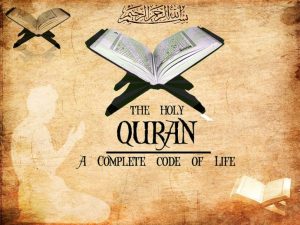 In its capacity as a divine book of guidance, inspiration, truth, clear signs, cure, mercy, glad tidings, and ultimate wisdom and knowledge encompassing everything necessary for the fulfillment of the ontological purpose of existence (see Quran 2: 97, 185; 10: 57; 17: 82; 16: 89), the holy Quran accounts for everything Islam as a total code of life is.

The Quran is a symbol of the Islamic message. The two have become inseparable, almost synonymous with each other.

Thus, the Quran signifies to Muslims the source of their identity, strength, consciousness and cultural as well as civilizational being. Without the Quran, there will be no Islam; nor will there be Muslims and Islamic culture and civilization.

Without the Quran as a conduit of revealed wisdom and knowledge concerning the spiritual and ethical meaning and purpose of life, furthermore, little permanently wholesome will ever be possible for man to achieve.

One thus may ask: what conceptual, substantial or moral good would remain with mankind if the towering contributions of God’s holy prophets and the direct and indirect contributions of numerous sages and leaders the prophets produced were taken away from them? The emphatic answer is: nothing, or extremely little, at best.

Nonetheless, it is a sad truth today that many Muslims’ relationship with the Quran is fraught with a myriad of deficiencies. In a nutshell, the Quran has been either abandoned completely, or is erroneously dealt with.

In the former scenario, many people have nothing to do with the Quran and its content insofar as their private, family and professional lives are concerned. Their affiliation with Islam is based on some repetitive rituals and traditions which they inherited from their forefathers and which they blindly follow.

Their Islam often revolves around “Islamic” symbolism, deadening formalism and baseless tales and superstitions. They are not interested in the Quran as they know that with it all they live for will suddenly be exposed and shaken to its core.

In the latter case, the Quran is regularly but hastily read or recited without duly understanding or contemplating its content. Moreover, its substance is yet misread, misinterpreted and misapplied. 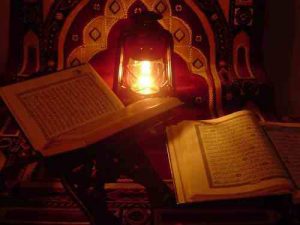 The Quran is often used as a means for justifying and supporting some preconceived ideas and judgments.

People have also subjected the Quran to themselves, rather than subjecting themselves to it. They have rendered the Quran relative, and their selfish goals and concerns absolute.

The Quran has partially been made the object of their one-dimensional and patchy — often outright flawed — intellectual, spiritual and cultural pursuits.

The Quran is mean to be superficially and partially comprehended and implemented, at best, and misused and even abused, at worst.

However, the Prophet warned that there will be times when certain people will recite the Quran but it will not go beyond their throats, meaning it will not enter their hearts and they will not understand it.

“They will go out from (leave) Islam as an arrow darts through the game’s body” (Sahih al-Bukhari).

Some of the less heartrending states of affairs go along the lines of constantly reading the Quran for the sake of mere reading it. The Quran is also recorded and regularly played on numerous TV programs and during various official and unofficial ceremonies, in public and in private.

Quran recitations by world’s most famous reciters could be heard virtually everywhere in most of the Muslim world: from the minarets of mosques, in shopping centers, schools, private houses, restaurants and coffee shops, and all forms of private and public transportation. Some reciters have become world celebrities as a result; many others dream and do their best to follow suit.

Tilawah (reciting Quran) competitions are organized on a regular basis, both locally and internationally, and huge amounts of money are allocated for the purpose (all this takes place despite most universities and other institutions of higher learning, in their capacity as rare beacons of hope — especially such as those endued with an Islamic spirit and disposition — having been bereft of significant research and publication opportunities and funds).

Countless schools and colleges dedicated to reciting and memorizing the Quran are established worldwide and many Quran reciters and hafizs (those who memorize the whole Quran) are produced annually.

The many outward benefits of all those activities notwithstanding, quantity and form, clearly, are emphasized at the expense of quality and substance, in complete opposition to the whole spirit of Islam and the Quran.

It is true, at the same time, that there is a growing number of genuine exceptions, but unfortunately they are still few and far between. It stands to reason that the whole set of the mentioned prevalent religious trends stands for a segment of what could be dubbed an emerging Muslim pop(ular) culture some of whose main features and qualities revolve not only around the Quran, but also around the realms of Muslim fashion, entertainment, media and sport.