Among the many verses of the Quran that talk about the ones who will enter paradise, one that has always struck me was this:

And as for the one who feared the standing before his Master and prevented his self from unlawful desires, paradise will be his abode. (79:40-1)

It really puts a marker. Most verses speak of doing good deeds and avoiding sin, but this ayah is more subtle. It combines the fear of standing before Allah along with preventing one’s self from unlawful desires. And the gift is Jannah (Paradise).

Firstly, it shows us that Islam is a religion of action. It is not just lip service. It’s actions of the limbs, such as prayer, fasting, charity and other good deeds.

It is the actions of the tongue such as dhikr, making dawah, saying kind words, being polite etc. and from this we understand that it is also actions of the heart– loving, caring, stopping oneself from evil and so on.

But more importantly, and as a great saving grace for us, this verse is also proof that having desires and feelings towards something that is evil is not in and of itself wrong.

In fact, one only needs to prevent oneself because they want something. This is proof that if one feels the urge to do something wrong and withholds, there is reward. In fact, the reward is Jannah.

Self-control is something that us human beings find it difficult. In fact Allah talks about this and says:

{Man was created of haste.} (21:37) meaning that mankind was created impatient and edgy. Allah also says:

Allah desires to lighten your difficulties, but mankind was created weak. (4:28)

That last verse is also important. It shows us an important principle in terms of what Allah has asked us to do- all that Allah is asking us is there to make life easier for us, either in both this world and the next or in the next at least.

However, Allah also makes the declaring statement that man was created weak. We fail. And we struggle. We just want everything here and now. And we do not like rules. We like to live as and how we please.

Just look at how badly the world is going. And that is because on an individual and collective level, we have abandoned the guidance of Allah.

Allah gave us guidance that might initially seem difficult, but only for the betterment of society and our own salvation. That is what Allah is pointing to.

Scientific research says that people who only seek instant gratification (everything here and now) are less successful in life than those who can do with delayed gratification (get their just reward after a set time and after having done something).

Allah is teaching us about delayed gratification. He is teaching us to do good deeds, to stay away from sins, even if our self wants something else, so that after some time we find ease in our religion, and that after death we end up in Jannah. And that is why He pairs it with standing in front of Him.

Standing in front of Him will be among the greatest experiences in our lives as human beings. To stand in front of Allah, and be accountable for all our deeds. It is a grand occasion, and Allah is giving such an easy solution- just control yourself. That’s it, easy and simple.

We control ourselves when we want to not do good deeds and push ourselves to do them. 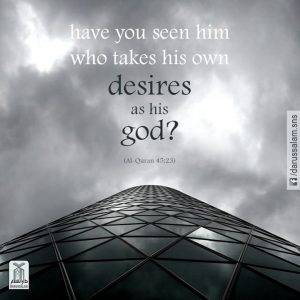 And we control ourselves to stay away from sin even when we feel like rushing to do them. And we do it only because we fear Allah and want His pleasure. That is the end goal. That is our destination, and that is achieved by having self-control.

Islam doesn’t teach self-control for control’s sake. It is there to make our lives better, to make us better slaves of Allah, and to have a better chance of making it to our ultimate home. May Allah make us of the people of Paradise.

“Whoever seeks to purify his self then let him favor Allah over his own desires. For hearts are the vessels of Allah on earth. The most beloved to Him are the ones most soft, most strong and most pure.”

The Quran makes it clear that the successful are the ones who purify themselves and that on the Day of Judgment what will count is a sound heart.

Imam Ibn al-Qayyim is saying that for us to do that, we only need to make sure that we favor Allah, His wishes and commands over our own desires, and that is it.

The most soft, even when one wishes to be harsh on someone else, the most strong even when the limbs are weak and prone to sinfulness, and the most pure even when the soul seeks to find hatred and enmity.

So how do we control ourselves?

It is a lifelong struggle and nothing is achieved overnight of course. However, there are a few points we can remember that will be principles we hold on to, to help us keep away from our desires and purify our hearts.

And Allah never breaks His promise.