After hearing the news of his death, I called my Arabic teacher and told him, “Ustadh, do you remember Ferdous, the brother who I lived with for a few days in the other apartment?”He could not recall at first but then replied, “Oh you mean that brother who was constantly reciting the Quran?”

Two years ago I was studying Arabic at a Language Institute in Cairo. During my stay in Egypt, I had the privilege of meeting incredible students from all over the world. Among such individuals, there was one student in particular who caught my eye and stood out from the rest. Being that I work closely with the youth, I have never met any teenager like him before and only Allah subhannahu wa ta`ala knows if I ever will.

I may be a little older than him, but he is one whom I will always consider as my role model: a true inspiration and an indomitable spirit who left a legacy, not only for those who had the privilege and honor to have been around his presence, but also for those who hear his story even till this very day.

Who was this extraordinary individual? His name was Mohammed Ferdous Ali. Before getting into the story itself, let me provide some background information just so you can have a deeper sense of appreciation.

Ferdous was a promising 19 year-old student from England who traveled to Egypt in order to study the Arabic Language and Islamic Sciences. My first encounter with him was when I went to check out a room that had been available in his apartment. He graciously offered me some tea and biscuits and made me feel so welcomed from the outset of my visit.

I was so moved by this simple act of hospitality and had a good feeling that this was the right place for me. I lived with him for a few days in his apartment and eventually had to return to my former residence. Soon after I moved back to my old location, he sent me the following text: 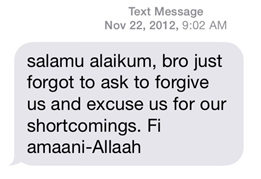 Surprised, I asked to myself, “What did he do to me for me to even forgive him?” “He has never hurt me nor did he do the slightest thing to offend me!” But this was from his noble manners—to reach out regardless of whether or not he abused me. He was simply doing his part by being a courteous and well-mannered individual.

It never occurred to me that I would end up cherishing this one text, never deleting it from my phone and going back to it time and time again whenever I spoke of him and his story. His story has been shared with so many people in the U.S and the powerful message always leaves people deeply affected, emotional, and most importantly—inspired.

I was grateful for the few days that we shared together—for he left behind a lasting imprint on me and everyone else that he interacted with.

There was so much I learned from his daily routine. He used to sleep right after the `Ishaa’ prayer and would wake up before dawn to go recite Quran to his teacher—as one of his goals was to complete the memorization of the Holy Quran. This being something that he was so committed to, I would find him reading and reviewing Quran profusely.

His room was a small little section in the living room that he had divided with a curtain. When entered his little room, I realized that it was filled with books and books. He slept on a thin little mattress on the floor, totally abandoning worldly comforts and pleasures. He was always engaged in good, whether it was seeking knowledge, offering all the prayers in the Masjid, optional fasting, spending in charity, following the sunnah etc.

I never found him in idle talk, backbiting, wasting time, and losing focus. I realized that this very being truly lived as though he was a traveler of this world, and knew that he had a mission to complete before his final return to…Him.

Now to the story, move to the next page to read more…