God has described Himself in great detail and has exhorted us to use His names and attributes in our supplications (duas).
aaa

In this day and age, our lives seem to play out in fast motion. We are continually rushing from one thing to another. We rush to the mosque, we rush home again, and we hurry through meals so we can get back to work, or back to school, or back to the screen.

We have lost the art of pondering and wondering.

The Beautiful Names of God

We might know vaguely that God has many different names, some of us might even be able to recite them or remember them from childhood rhymes, but how often do we really think about the names and attributes of God. How often do we call on God by a particular name because it relates to our needs?

The most excellent Names belong to God: use them to call on Him, and keep away from those who abuse them– they will be requited for what they do. (Quran 7:180)

Ibn Taymiyah (1263 -1328 CE), one of Islam’s most respected theologians, spent his life fighting for the return of Islam to its primary sources, the Quran and the Sunnah.

To that end, one might expect to find a body of work calling for the implementation of strict Islamic law, however that was not strictly the case.

Ibn Taymiyah explained to his students that the most beneficial knowledge a person could learn was the knowledge and understanding of God’s names, attributes and actions. This knowledge, he suggested, filled the heart with love, hope, fear and the glorification of God.

He is God: there is no god other than Him, the Controller, a the Holy One, Source of Peace, Granter of Security, Guardian over all, the Almighty, the Compeller, the Truly Great; God is far above anything they consider to be His partner. He is God: the Creator, the Originator, and the Shaper. The best names belong to Him. Everything in the heavens and earth glorifies Him: He is the Almighty, the Wise. (Quran 59:23-24)

In this short passage alone there are more than ten names and attributes, yet we often limit ourselves to using the words God, or Lord, or the Most Merciful.

God has described Himself in great detail and has exhorted us to use His names and attributes in our supplications (duas). He has instructed us to think about what we are asking and to call on Him by the most appropriate name.

In this short series of articles, we will look at some of the well-known names and attributes, and also some of the lesser known and thus lesser used names.

However, before we begin to discuss the qualities and characteristics of God, as implied by His names and attributes, there are a few useful points to understand and acknowledge. God must be referred to as He referred to Himself, or in the way Prophet Muhammad referred to Him.

We must always bear in mind that God tells us very clearly that there is nothing like Him, nothing comparable to Him.

For example, when God is described as the All-Seeing He does not see through eyes like those of His creation, (human beings or birds for instance). His eyes are unique and incomparable.

God is not constrained by our limitations. All of God’s names are beautiful; all of His attributes are perfect and all of His actions are based on His pure wisdom.

It is sometimes difficult to understand the difference between a name and an attribute. They are linked in a symbiotic way and Sheikh ibn Baaz (1910 -1999 CE) very effectively explained the difference.

‘The names of God are all those names that refer to God Himself and also refer to one of the perfect attributes that exist in Him, such as the All-Powerful or the All-Knowing.

For example God could be called the Forgiver, His name, or the Most Forgiving, the attribute.

And finally, it should be noted and understood that the Names of God, and thus attributes, are not limited to ninety-nine. There are other names both revealed and hidden in the unseen.

Although Prophet Muhammad mentioned in hadith[1] ninety-nine names, he also supplicated in a way that makes clear that there may be many, more names.

I ask You by every name belonging to You which You have named Yourself with, or revealed in Your Book, or You taught to any of Your creation, or You have preserved in the knowledge of the Unseen with You… (Imam Ahmad)

To conclude this introductory article, we will discuss one of God’s names that is oft repeated but little understood. We use this name, Rabb, in every prayer.

Those of us whose first language is English use the word Lord in our supplications often without realizing that it is the translation of the word Rabb.

Ar Rabb, as in Alhamudilillah rabb bil Alamein, the second verse of the Opening chapter of the Quran, is a big part of every prayer we make.

The English translation of that verse is All Praises and Thanks are due to God the Lord of humankind, the jinn and all that exists. The word Rabb translates to Lord, however it is a very rough translation that fails to describe the nuances contained in the Arabic word.

Rabb comes from the Arabic root ra ba ba, and is defined as, the lord, owner, or master; the one who nourishes, sustains, instructs and provides for those under his care. 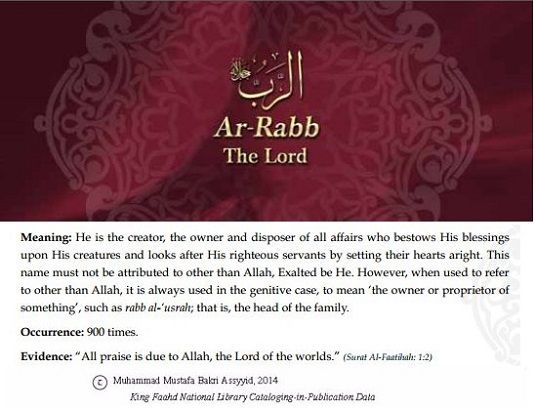 Ar Rabb is the One and Only Master of all creatures. He nurtures and sustains them and helps all of them grow and develop. He bestows His blessings upon all of His creatures, from the biggest, to those as tiny as an atom.

In the Quran we can find beautiful supplications used by the Prophets and righteous people, and in them they often use the word “Rabbanaa (Our Lord)”. This is because they are asking for that special nurturing, care, and guidance that is associated with that particular name.

Try not to use this word without pondering its meaning, if you feel in need of nurturing, and what human being doesn’t, call on your Lord, call on your Rabb. We do it all the time but many of us do not slow down long enough to really understand where that special care originates.

God is our Rabb, He hears our supplications and responds to them. Moses said:

When we say the word Rabbanna, or Our Lord we should linger a little longer over the word and feel our hearts fill with joy and our burdens float away.