At the age of 21, after many years of searching and studying monotheistic religions, I took the statement of faith that makes one a Muslim.

At this point in my life I had suffered many trials.

I grew up in constant fear of my abusive, alcoholic father; my mother battled cancer for over four years and lost her fight; I was a victim of assault; and I battled one illness after another.

When I tell people these very personal accounts of my young life, they often assume that these trials have affected my very foundation. And, pre-Islam, this was very true. I was shaken to my very core. I felt like a leaf blowing in an unforgiving wind. Consequently, I was bitter, unstable, often emotional and more than anything I was lost.

With all that I had already faced, when I heard Quran 29:2:

Do the people think that they will be left to say, ‘We believe’ and they will not be tried?

I thought, what more could I possibly go through?

I was magnificently foolish in this thought. The tests of my young life, pre-Islam, had only been a taste of what was to come.

But with the tests I faced after becoming Muslim, there was one major difference. I had a sturdy foundation of Islam in my life that kept me grounded, logical, and focused.

I was comforted by the stories of the Prophets. And I came to understand that bitterness is waste of time because whatever has reached me would never have missed me. I looked forward to ease after every hardship. And I pray that Allah continues to guide me.

“If you ponder Allah’s wisdom in that with which He tests His slaves and chosen ones, by means of which He directs them to achieve the highest goals and reach the highest positions, which they could not have achieved without these tests and trials … all these tests and trials are in fact a kind of honor, for while they appear to be trials and tests, in fact they are mercy and blessings.

How many great blessings from Allah are the direct consequences of tests and trials?

When we think about this, Ibn Qayyim’s statement is very true. It is not in human nature to strive to be better when we are experiencing ease. It is when calamity comes that we change.

Just like a lump of coal will remain a lump of coal until a great amount of pressure is put on it. This is the pattern of nature that Allah has created. 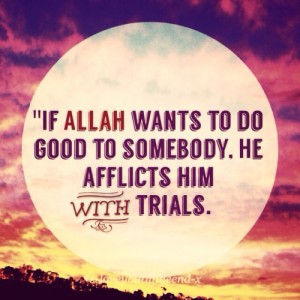 Who is Tested the Most?

The Prophet Muhammad (peace be upon him) was asked:

“Which of the people are most sorely tested?”

The Prophets, then the next best and the next best. A man will be tested in accordance with his level of religious commitment […] Calamity will keep befalling a person until he walks on the earth with no sin on him. (At-Tirmidhi)

Since the Prophets were tested the most, we can look to them as perfect examples of how to deal with calamity when it touches our lives.

Prophet Noah (peace be upon him) advised, warned and urged his people for 950 years to worship Allah alone, give up evil deeds and enjoin the good. For nearly a millennium, he strove to guide his people. But his call fell on deaf ears. Only a very few headed his message.

During his many, many years as Prophet, Noah’s people continuously insulted him and labeled him a mad man. But Noah did not lose hope in his Lord, nor did he abandon his task. He simply asked Allah for help.

So he invoked his Lord, ‘Indeed, I am overpowered, so help.’ Then We opened the gates of the heaven with rain pouring down… (54:10-11)

Noah was patient with his trails, continued to believe and call the people to the straight path. He only asked of his Lord and ease came to him.

Prophet Ibrahim (Abraham, peace be upon him) tried to show his people that there is no truth or logic in worshiping an image or an idol that cannot even do anything for itself. For his bravery in speaking the truth and strong belief in the oneness of Allah, he was thrown into a fire.

In this moment when Ibrahim was being thrown into a fire, he did not renounce his faith or ask the people for forgiveness. He remained steadfast.

Ibrahim stood up for the truth, and even when his life was threatened in a horrific way, he remained true to his Lord and ease came to him.

But there is one Prophet that is almost synonymous with patience and steadfastness during hardship, Prophet Ayyub (Job, peace be upon him).

Ayyub lost everything he had in this world. He lost all his wealth and property, grieved the death of all his children, lost his strength and suffered from a painful illness for many years and finally lost his wife.

Through all of his trials he continued to be thankful and dutiful. He did not complain, nor did he become bitter. Instead, when he had lost everything, he asked Allah for mercy. 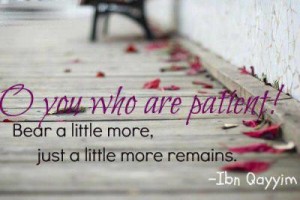 Verily! Distress has seized me and You are the Most Merciful of all those who show mercy.”  So We answered his call, and we removed the distress that was on him, and We restored his family to him (that he had lost), and the like thereof along with them as a mercy from Ourselves and a reminder for all who worship Us. (21:83-84)

Even after all the trials he suffered, Ayyub remained steadfast in his worship and thankfulness to his Lord. When he finally turned to Allah and begged for mercy, ease came to him.

Ease will Come after Every Hardship

When dealing with adversity, the tradition of the Prophets is clear. Never let calamity shake your faith in Allah. Complain only to Allah. Ask Allah for a way out of difficulty and beseech Him for His mercy.

Ease will come, just as day comes after the night.