"Two eyes will never be touched by the fire of Hell; an eye which weeps out of Fear of Allah and an eye which spends the night in guarding in the Cause of Allah."(Prophet Muhammad)
aaa

There are many great virtues for crying out of fear from Allah. Allah praised some of His Prophets, then explained the reason for the praise as in His saying:

When the verses of the Most Merciful were recited to them, they fell in prostration and weeping. (Quran: 19: 58)

One who weeps out of fear of Allah, will not enter the Hell till milk returns back in the udder; and the dust raised on account of fighting in the path of Allah and the smoke of Hell will never exist together. (At-Tirmidhi)

Seven people Allah will give them His Shade on the Day when there would be no shade but the Shade of His Throne (i.e., on the Day of Resurrection): And they are: … and a man who remembers Allah in solitude and his eyes become tearful. (Al-Bukhari and Muslim)

“I heard the Messenger of Allah saying:

Two eyes will never be touched by the fire of Hell; an eye which weeps out of Fear of Allah and an eye which spends the night in guarding in the Cause of Allah. (At-Tirmidhi)

“It is dearer to me to shed one drop of tear than to give out in charity one thousand Dinar (i.e. golden currency).”

The Weeping of the Prophet

“The Prophet said to me:

Recite the Quran to me.

I said: “O Messenger of Allah! Shall I recite the Quran to you, when it has been revealed to you?”

I love to hear it recited by others.

So I recited to him a portion from Chapter An-Nisa’. When I reached the verse (which means): “How (will it be) then, when We bring from each nation a witness and We bring you (O Muhammad) as a witness against these people?” (Quran: 4:41). He said:

When I looked at him I saw his eyes were shedding tears”. (Al-Bukhari and Muslim)

When the Prophet saw his companions digging a grave to bury one of the Muslims, he stood at the edge of the grave, cried and said:

O my brothers! Prepare for this day (i.e. death).

“I came to the Messenger of Allah when he was performing prayers. He was sobbing and his chest sounded like a boiling kettle”. (Abu Dawud and At-Tirmidhi) 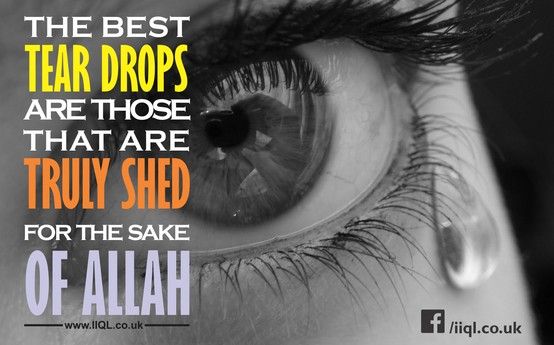 Once he stood up praying the optional night prayer and cried to the extent that he wet his garment.

“Once he was sitting and started crying until he wet his beard. He continued to cry until he wet the ground under his feet. When it was Fajr time, Bilal came informing him that it was due. Upon seeing him crying this hard he exclaimed:

`O Messenger of Allah! Why do you cry so much while Allah has forgiven whatever you might have done wrong in the past and what you might do wrong in the future?` to which he replied:

Should I not then be a grateful slave? A verse was revealed upon me tonight, woe to him who recites it and not reflect on its meaning.

Indeed, in the creation of the heavens and the earth and the alteration of the night and the day are signs for those of understanding. Who remember Allah while standing or sitting or [lying] on their sides and give thought to the creation of the heavens and the earth, [saying], “Our Lord, You did not create this aimlessly; exalted are You [above such a thing]; then protect us from the punishment of the Fire. Our Lord, indeed whoever You admit to the Fire-You have disgraced him, and for the wrongdoers there are no helpers. Our Lord, indeed we have heard a caller [i.e. Prophet Muhammad calling to faith,[saying], “Believe in your Lord,” and we have believed. Our Lord, so forgive us our sins and remove from us our misdeeds and cause us to die with the righteous … and fear Allah that you may be successful. (Quran: 3: 190-200)

The Benefits of Crying out of Fear of Allah

2- It is a quality of the righteous.

3- It is a distinct character of those deserving Paradise.

4- It is the way leading to the pleasure of Allah and attaining His love.