Are souls to be left abandoned, wandering in the labyrinths of this life, without a Lord who protects them or a helper who supports them?

No matter how strong man claims himself to be, he is weak.

Whenever he is alone, desolation and uncertainty overwhelm him.

He may end up at branching roads and feel at a loss about which to take. If he chooses the wrong path, he may continue toiling through it for days or years without reaching a destination. This is because initially he started without good guidance.

Man direly needs one who inspires in him the correct choice and guides him to the truth whenever mystified or confused. The human body is susceptible to pain in any place. It is like an open city that can be attacked at any time, from any side.

If he contemplates this, man will realize that every atom of his body can be a gateway to a chronic disease, causing him great pain; similarly, he will realize that an unexpected turn of events may affect his entire life.

We are truly in great need of continual good and the removal of hardships through a strong relationship with our Creator that makes life flow easily, peacefully, and blessedly.

Prayer guarantees all this to a believer. Along each day’s route, Islam designated five gracious pauses for God, distributed at specific times throughout the day, during which mankind is directed to meet their Lord, open their hearts, and speak their minds to Him, starting by praising Him and acknowledging His grandeur, followed by requesting His blessings and the averting of evils, asking for His help and seeking His contentment, and shoring up their deficient knowledge with His perfect knowledge and their inadequate power with His Supreme Power.

In a sacred hadith God says:

I have divided prayer between Myself and My servant into two halves, and My servant shall have what he has asked for. When the servant says, {All the praises and thanks be to Allah, the Lord of existence}, Allah says, ‘My servant has praised Me.’

Prayers & the Purification of the Soul

The body, racing on the tracks of this life, becomes covered with sweat and dust, as does the soul; it becomes overcast by clouds and gloom. 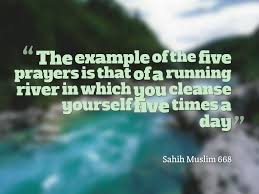 After each long round, it needs some time to tidy up and restore purity and order to that which has been soiled or disheveled. Prayer is no more than a few moments that recover this lost or sought-after perfection.

The five daily prayers provide expiation for whatever occurs in the time between them. Imagine a man has work and there are five rivers between his house and his workplace. He would go to his workplace and work as much as Allah willed, becoming dirty or sweaty. Then, whenever he came to a river, he would bathe, what would remain of his dirt?

It is like this with prayer; whenever he commits a sin, he supplicates and seeks forgiveness, so he is forgiven for whatever has preceded it.” (Al-Bukhari and Muslim)

Too much is relinquished in the struggle for existence or the battle for bread, into which people throw themselves while the instinct most active in their blood is selfishness, against which the ideals of reciprocal mercy, altruism, and benevolence are reduced to faint impulses.

Abandoning people to such fiery emotions will inevitably stifle their human virtues. No wonder that God prescribed prayers throughout the day and night as a lifeline thrown out of the blaze every now and then. The Prophet said:

Allah has an angel that calls out at every prayer: “O Children of Adam! Rise to the fires which you have ignited and put them out.” And he said, “You burn! You burn! And once you pray Subh (Dawn prayer), it washes it out. Then you burn! You burn!

The hadith portrays the minor sins committed throughout the complex and entangled lives of people, and the softening and pacifying influence that prayers have on them.