We should realize that there is nothing in our own selves that should cause us to be arrogant because none of it is from our own making.
aaa

A family friend of ours recently underwent surgery for heart disease.

His wife had talked with my mother about his condition before his surgery. “He would just sit in his recliner almost all day,” she lamented.

It was difficult, even painful at times, for him to breathe, and even “simple tasks tired him out.”

Doctors discovered that the arteries around his heart were clogged. They performed surgery to reroute the blood flow through those vessels so that the heart muscle could function as it was supposed to.

By God’s grace the surgery was successful and upon recovery he was able to do most everything he was used to. Additionally, he began a strict regimen to ensure the future health of his heart. His only wish is that he would have undergone treatment earlier, rather than have lived so long with so much discomfort from a diseased heart.

The heart begins beating about three weeks after conception—long before the brain and central nervous system are fully developed.

In an average life-time, the heart beats two and a half billion times, pumping blood through arteries, capillaries and veins in all parts of the body. All bodily functions depend on the healthy functioning of the heart.

When the heart is physically unhealthy, its owner feels pain—chest pain, shortness of breath, an inability to carry out his normal daily activities. Were the physical heart to stop beating, even for just a short while, physical death would ensue.

As mentioned in this series of articles, the heart is the vessel by which we know God, love Him, and seek closeness to Him—that is the purpose for which it was created. If it is unable to fulfill this purpose, then by definition, it is sick.[i]

Diseases of the Heart

The diseases that can potentially afflict the heart are many. However, among them are a few that we should all be extremely wary of because of the damage they do to the heart and because of their ability to quickly cause the heart to succumb to other diseases.

One of these diseases is at-takkabur, which is derived from the root word kabeer, which signifies growth or grandeur. The person who shows takkabur thinks that he or she is greater than they really are. In English, this is usually translated as arrogance.

Satan, the worst beings in the history of creation, exemplified the disease of takkabur by thinking himself greater than he actually was. This disease led him to disobey God and follow an evil and erroneous path away from His guidance.

Not surprisingly, Prophet Muhammad (peace be upon him) warned against arrogance saying:

No one will enter Paradise who has an atom’s weight of arrogance in his heart. (Muslim, 91)

Thus, even though arrogance may be a trademark of all tyrants and oppressors, we should all be disciplined about purifying our hearts from even the tiniest bit of this horrible disease. 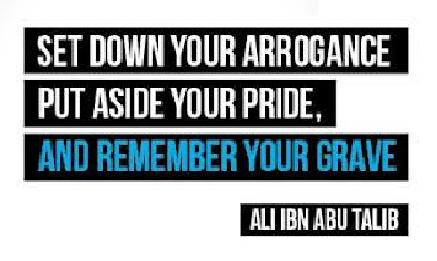 Scholars explain that there are different degrees and types of takkabur and that many other diseases are actually offshoots or close relatives of takkabur. A person may believe himself to be better than others because of some blessing that God has bestowed upon him—knowledge, wealth, beauty, nobility.

Another consequence of arrogance is that a person might be inclined to boast and brag when in the company of others (the disease of fakhr). Or it may lead him to be self-admiring, vain, and impressed with himself and his accomplishments (the disease of ‘ujb).

Arrogance can lead a person to be unwilling to forgive others and harbor anger and hatred toward them (the diseases of ghadab and bughd, respectively). It can also cause them to envy others because they feel that they more rightfully deserve the blessings that others have (the disease of hasad).  And the list of diseases that takkabur is related to goes on and on—more than this article could ever encompass.

Thus, the disease of takkabur is indeed one of the worst diseases of the hearts and understanding how to purify our hearts from this disease is vital.

Prescriptions for the Disease

One of the best prescriptions for takkabur given by the scholars is to know one’s origins, understand one’s self, and remember one’s ultimate destination.

Firstly, we should remember our humble origins. Allah draws our attention to this in numerous verses of the Quran:

Has there come over man a time when he was nothing remembered. We created man from a sperm drop mixed in order to try him. (76:1– 2)

Perished is man! How ungrateful he is! From what stuff did He create him? From a sperm drop He created him and proportioned him? (80:16–9)

Let man reflect from what he was created. He was created from an ejected fluid that issues from between the loins and the ribs. (86:5–7)

Secondly, we should realize that there is nothing in our own selves that should cause us to be arrogant because none of it is from our own making. Allah is the Creator (Al-Khaliq) and Fashioner (Al-Mussawar), the Sustainer and Provider (Ar-Razzaq), and the All-Knowing (Al-‘Aleem). Thus, any wealth, knowledge, ability, charisma, beauty, eloquence, or position we are blessed with in this life is purely from Allah.

Thirdly, we should remember our ultimate return is to Allah. Any blessings we have and any accomplishments we may have fulfilled are ephemeral. We will not take them with us after we die. The Prophet tells us:

Whoever humbles himself to God, Allah will raise him. (Muslim, 602)

The Virtue of Humility

Humility is a virtuous characteristic defined as being unassuming of one’s own greatness, precedence, or importance among others. About humility, Ibn Al-Qayim says the following:

“There are two realities which we must fully grasp in order to be truly characterized with the noblest characteristic of humility. First and foremost is to come to truly know Allah’s perfection, His abundant favors upon us and how we are fully dependent upon Him. Secondly, we have to come to know ourselves, where we come from and our numerous weaknesses and shortcomings.”

Lastly, just like the medical patient recovering from heart surgery, as we try to restore our hearts to their original spiritual health and purity, we must remember to be patient, regimented and consistent. Sheikh Hamza Yusuf writes:

“When speaking of the purification of the heart, it is important to know that “purification” is not a state, but an ongoing process. Just as we go through a day careful about our bodily cleanliness, we must similarly tend to our spiritual purity, for purification and sincerity do not survive a passive relationship. They are not qualities that are ignited and glow on without attendance.[ii]

May Allah help us all to purify our hearts and keep them spiritually healthy.

[i] In his book Ihya’ `Ulum ad-Din (Revival of the Sciences of Religion), Imam al-Ghazali says that every organ of our body has a function; when it fails to do its functions, it means it is not well. The spiritual function of the heart is to know its Creator, to love Him and to seek closeness to Him. If the heart fails in this function then it is sick. As quoted by Muzammil Siddiqi in “Spiritual Diseases: Remedy.”