“Can't you see I kept it a secret in the former life? I didn't expose you, and that was part of my mercy, and today I will keep it a secret, I will not expose it.”
aaa

The angels will call to the believers. So the Angels grab them as well and they come to Allah.

There is a hadith that says, Allah will say:

“My servant, come closer to me.”

There are some special servants that Allah will say to them, “come closer to me”.

Allah speaks to them in a speech, we know that Allah has a speech, He told us this in the Hadith and in verses, but we don’t know what this speech is like.

There is nothing like Him and He hears and sees all things.

Just like He says He hears and sees, He speaks. But how does he see? And how does he hear? Not like us. In a manner that befits Him, He knows. We accept it as it is.

And Allah says to him:

“O My servant, look at your records.”

And he sees sins.

Allah says to him:

Allah says to him:

Finally the servant will say:

“Oh my Lord! For here throwing me into the Hellfire is easier than to judge me, and me standing before You with this sin.”

So then he looks at the next page, he sees another sin, worse than the other one, same thing happens…

Then he looks at worst sins, and sins keep growing… and this poor believer is sitting there saying:

In the end, he says:

“I’m actually going to Hellfire, my deeds haven’t been accepted! I’ve done all these wrong deeds, and that’s why my good deeds have been invalid.”

So when he is certain that he’s going to end up in Hellfire, Allah says to him:

“My servant, you know how you kept it a secret in the former life.” 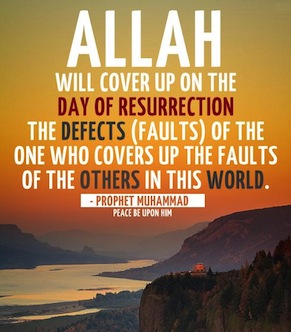 “Why did you keep it a secret?”

“Because I was ashamed of my sin, my Lord.”

“Can’t you see I kept it a secret in the former life? I didn’t expose you, and that was part of my mercy, and today I will keep it a secret, I will not expose it.”

In one other hadith Allah says to some of them:

“You knew a fault of your brother and you covered it, today I will cover yours.”

He turns the page and he sees his first good deed, then he turns and sees a better deed, and his deeds keep growing… Then he turns back, and the records are empty of his sins.

The angels don’t know it’s wiped off. And the sins will be forgotten.