How many types of Hajj are there?

Did you know that Hajj is not only one type that each and every pilgrim do?

In fact, it is not only one or two types of Hajj available for pilgrims to choose from. If you are planning to perform Hajj, you select one of three modes: Ifrad, Tamatu` and Qiran.

The 3 modes offer pilgrims choices that enable them to perform `Umrah and/or Hajj conveniently. This article provides a simplified description of distinctions between the three modes along with information about each mode.

However, before discussing these modes, we need to have an idea about distinction between Hajj and `Umrah. So, we quote the following from the article 5 Questions About Hajj and `Umrah:

Hajj and `Umrah are the pilgrimages of Islam. Hajj is usually referred to as the major pilgrimage or the Pilgrimage, and `Umrah as the lesser one.

Both Hajj and `Umrah consist of a journey to Makkah that involves certain rituals such as ihram, circumambulating the Ka`bah, walking between the hills of Safa and Marwah, and shaving or cutting the hair.

2. What are the differences between Hajj and `Umrah?

Another difference between the major and minor pilgrimages is that there is a specific time for Hajj which is not the case with `Umrah. You can do `Umrah at any time in the year.

In addition, Hajj and `Umrah differ regarding the ruling of each of them, as discussed below.

Hajj only or Hajj and `Umrah? 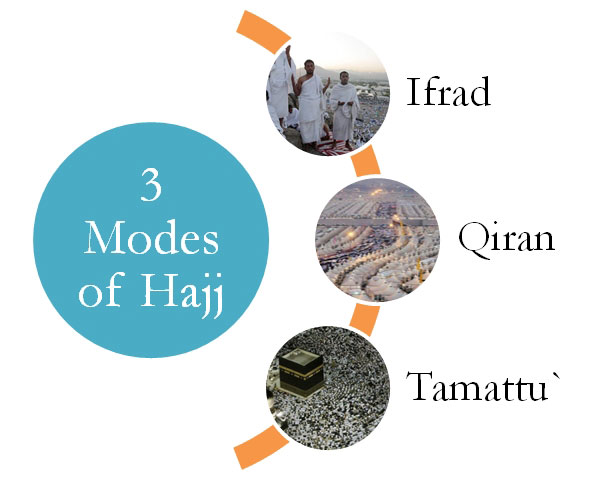 Let’s explore the following three cases to understand the three types of Hajj: 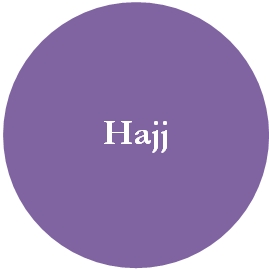 1. Ali lives in Saudi Arabia and he already performed `Umrah a number of times during the previous years. It is easy for him to travel to Makkah in his vacations and thus he is used to doing `umrah every now and then.

Last year, on Dhul-Hijjah 8 –just one day before the Day of `Arafah- he was moved so much by the scenes of pilgrims shown in the TV and thus he decided to do Hajj. He packed his stuff hurriedly and drove to Makkah. 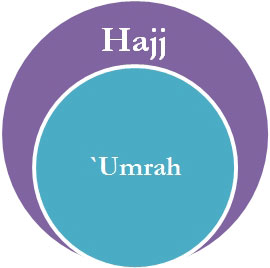 2. Salih is a businessman who is busy all the time. He has so tight schedule that it is too difficult for him to have even a whole week off.

Saleh wishes to travel Makkah this year to do Hajj and `Umrah but the problem is that time is too limited. He has only 5 days; he can travel to Makkah on Dhul-Hijjah 8 and return on Dhul-Hajjah 12.

It will be difficult for him to do `Umrah and then do Hajj in this short period.

The best option for Salih is to do a dual-intention Hajj or Qiran. 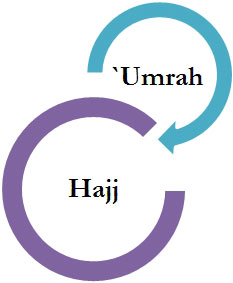 3. Omar is going to do Hajj this year. After waiting for long years and saving money month after month, he is now able to travel to Makkah for the first time in his life.

Omar chooses a Hajj package that allows him a relatively long stay in Makkah. He will spend two weeks in Makkah before the actual rituals of Hajj starts.

Omar decides to do `Umrah and Hajj in this journey. This might be his only chance to go to Makkah during his lifetime and thus it is wise to do both worships.

So, once Omar gets to Makkah this year he will do a complete `Umrah and then will enjoy his stay in Makkah for the remaining days until the time for Hajj rituals comes. Then he will join other pilgrims in doing Hajj.

The above three scenarios show how the variations of Hajj modes can make the Hajj experience more convenient and suitable for the different circumstances and conditions. We can also infer the main difference of the three Hajj types:

1. When a pilgrim performs the rituals of Hajj only, his choice is called Ifrad.

2. When a pilgrim performs the rituals of Hajj with the intention that the rituals of `Umrah are merged with their counterparts of Hajj, he is practicing Qiran. Here, the rituals are done one time but with dual-intention (i.e. Hajj and `Umrah)

3. When a pilgrim performs a complete `Umrah, takes a break and then, at the time of Hajj, initiates Hajj and does a complete Hajj, then he is practicing Tamatu`.

What Are the Meanings of the Names

The above description explains the Arabic names of the three types of Hajj:

– The word ‘Ifrad’ means singling something out which refers, in this context, to doing hajj only without any additions.

– The word ‘Qiran’ stands for combining two things together. In this mode, a pilgrim combines both the intentions of Hajj and `Umrah.

– ‘Tamatu`’ indicates enjoying something. This meaning may appear to have nothing to do with Hajj. Yet, actually it refers to the pilgrim’s enjoying the privilege of performing both the rituals of `Umrah and the rituals of Hajj in one journey, that is, he avoids the the trouble of making two separate journeys for Hajj and `Umrah,  or for his enjoying the time break between `Umrah and Hajj.

Pilgrims performing Tamattu` or Qiran are required to slaughter an animal as a token of gratitude for the concessions granted to them by Allah. That is called offering the hadi.

The following chart highlights the difference between the three modes of Hajj: 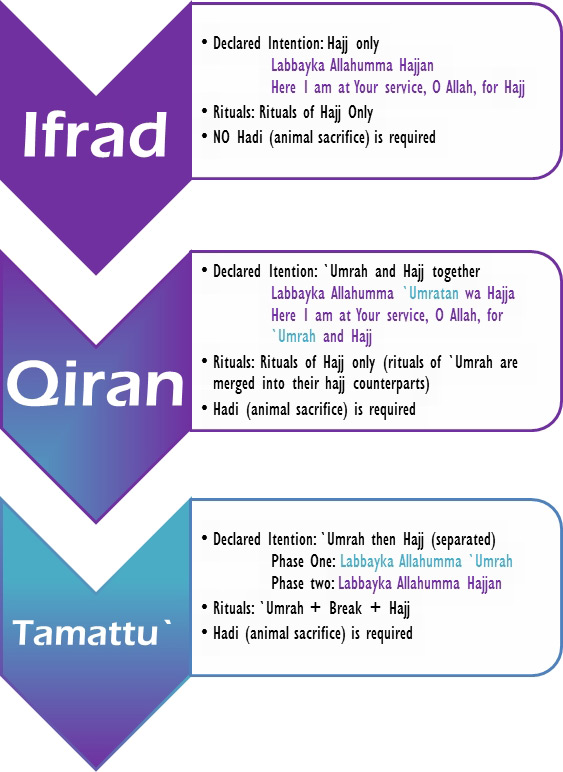