Editor note: This article was first published in June 2015. We republish it here due to its relevance and the useful information it contains.

This article surveys the different opinions regarding the maximum length of fasting for Muslims living in northern regions of the globe.

My main concern is to ease the hardship that a sizeable population of Muslims may experience this year and in coming years as a result of fasting an exceptional number of hours. The point is to facilitate fasting during Ramadan and not to avoid fasting or to postpone it for another time or place.

Many scholars have tried to answer the question of how long a Muslim should fast in the summer of the northern regions of the world (above 48 degrees latitude) as this article explains.

Some recent fatwas have held that Muslims should fast between the (estimated) Fajr and the actual sunset, even if the number of hours is 23 out of 24, or make up for the days in another season or region if people find it too hard to fast.

This article critiques these fatwas and presents a number of prominent contemporary opinions that better fulfil the objectives/maqasid of Ramadan.

This year, northern regions (i.e. above 48 degrees latitude) will experience excessively long fasts due to daylight calculations. In these parts of the world the period between the (estimated) Fajr time and the actual sunset ranges between 18 and 23 hours throughout the month of Ramadan. 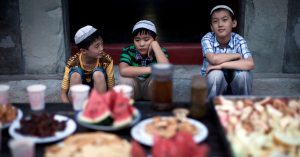 Should Children Fast the Long Days of Ramadan in Europe?

Several mainstream fatwas have concluded that Muslims ought to fast for that long, or otherwise not to fast this Ramadan and make up for the days later in a different region or different season.

Tens of millions of Muslims today live in regions north of 48 degrees latitude, from Canada, the UK, and Scandinavia to Russia, Ukraine, and Japan, as well as the northern parts of the US, France, Germany, Romania, Mongolia, China, and all of the regions above those areas. These populations have a serious concern: “What do we do? We simply cannot fast that long.”

This month, I received a number of similar questions and I met many Muslims from these countries, especially young Canadian men and women, who decided, unfortunately, not to fast this year, with no plans to make up for their fasting later.

In addition, local authorities in some of these countries have decided to intervene this Ramadan by not allowing students to fast during school hours citing health concerns. This is the case in the UK, where several schools reported cases from last year of fasting students falling ill, getting dehydrated, or fainting during the school day. They expressed a deep, and legitimate, concern about the health of a child under 18 who is going to fast for almost 20 hours every day in Ramadan this summer.

Interestingly, Barclay School in East London, UK, issued a statement about their decision to disallow children from fasting this Ramadan by among other things referring to the “purposes of Islamic law” (or Maqasid al-Shari`ah) which “safeguards the health and education of a child.”