I was shocked by the incidents of the past few days in the United States, just like everyone. Questions are being posed on what could be the reasons behind such high frequency of fatal shootings, resulting in bloody scenes of common rage and confrontation. Why this long list of lives lost at the hands of the US police officers, giving rise to revengeful attacks? And why do we see all the other forms of hateful killings and attacks perpetrated against innocent people of different faiths across America?

Regardless of whether we like to analyze the incidents through the microscope of religion or not, I believe such strange practices, sometimes, have to be dissected with the aid of dictates and teachings of our faith in order to understand the essence of the problem, especially since no one is ready to listen to the voice of reason and intellect circulating around, and pointing fingers at the madness gripping us, and making us completely blinded from appreciating the worth of human souls.

It is the voice of religion I see more powerful at this moment to wake us up from our slumber, shaking us up to realize that all those lives that we disregard and tend to intentionally or carelessly waste on daily basis are much more precious to their Creator than even all objects we all deem highly sacred and divine.

In Islam, many religious texts tell us about the sanctity of the human soul, which is more precious (and more divine) to Allah than the Holy Kabah itself. And the Noble Quran warns us, in its several verses, to desist from wasting human lives even by mistake, which means a high level of caution is needed when dealing with whatever relates to human soul.

So a physician who labors to save life can be punished by law if that life is lost due to what is called “medical negligence and carelessness”, because it’s believed that a doctor, in this position, figures in the scheme of God as he strives to carry out His command.

The same level of duty and carefulness is expected from a police officer whose job is to save people from harm.  So he owes a citizen the duty of providing him a service that makes him secure, but without subjecting him to any unnecessary mode of pain or harm while carrying out this command from God.

So, taking someone’s life even by mistake is not taken lightly by the laws of Islam, as the Quran makes this clear in chapter 4, even if the deceased happens to belong to the category of non-Muslims. It’s fundamentally important for a Muslim to respect every life of a human being, no matter who they are, be they Muslims or non-Muslims; even if they are at war with Muslims, indiscriminate, wanton destruction of human lives is strictly prohibited in Islam. The Quran makes this clear:

{It is not for a believer to kill a believer except (that it be) by mistake, and whosoever kills a believer by mistake, (it is ordained that) he must set free a believing slave and a compensation (blood money, i.e. diyah) be given to the deceased’s family, unless they remit it. 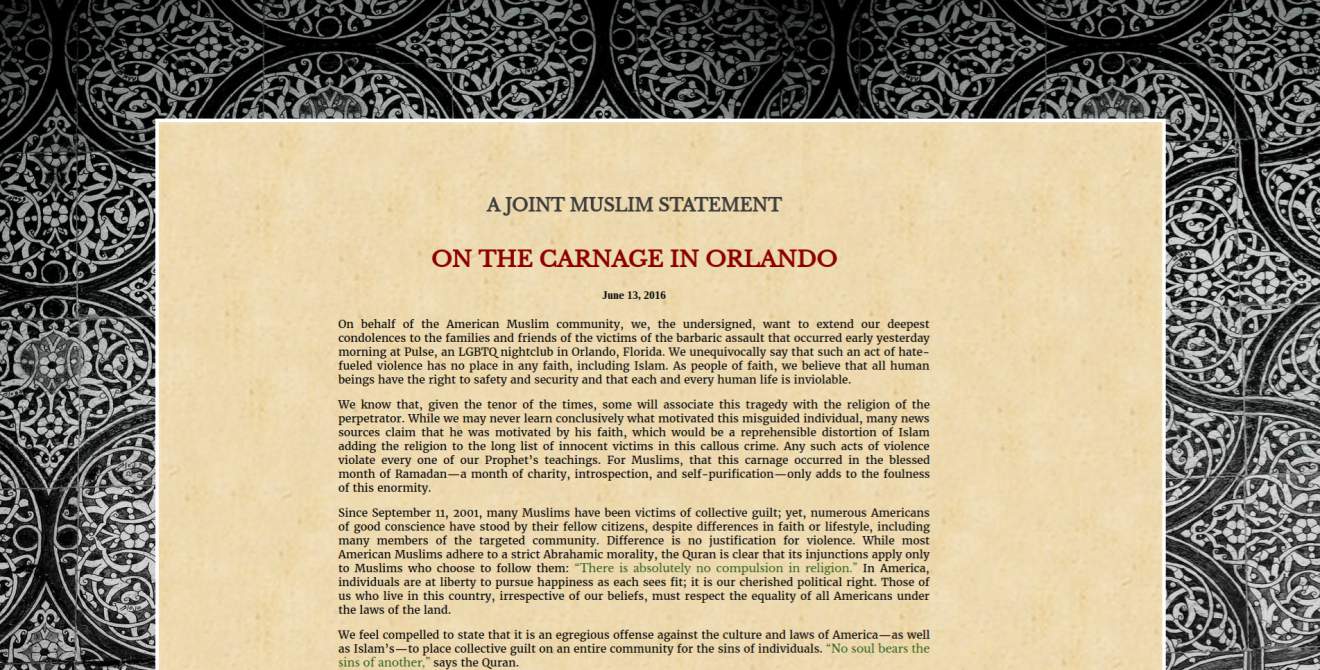 A Joint Muslim Statement on the Carnage in Orlando

And to stress on the gravity of this crime, even if committed by mistake, the Quran also stipulates a ransom of fasting for 2 months consecutively, if the accused fails to provide the aforementioned penalty as the noble Book elaborates further:

{And whoso finds this (the penance of freeing a slave) beyond his means, he must fast for two consecutive months in order to seek repentance from Allah. And Allah is Ever All-Knowing, All-Wise.} (An-Nisaa’ 4: 92)

Given its graver nature, a severer form of the above punishment is applicable to what is known as manslaughter in the criminal justice system, provided that the motive here is not deliberate, and without premeditation or malice aforethought. But nonetheless, the killing is neither justifiable nor excusable so that one cannot claim a legal backing behind committing the crime, that is why it’s deemed “unlawful killing” and “punishable crime” in the eyes of law.

If this is what Islam prescribes as a punishment for taking someone’s life by mistake or manslaughter, one can then imagine how severe the punishment will be for murder and intentional killing. The Quran made this clear in the same chapter:

{And whoever kills a believer intentionally, his recompense is Hell to abide therein, and the Wrath and the Curse of Allah are upon him, and a great punishment is prepared for him.} (An-Nisa’ 4:93).

So how come we take lightly the wrath of the Almighty Creator, and all forms of destructive killings are taken place with a total disregard to the sacredness of human souls!

So what happened last week in the US is beyond comprehension, starting from the cop’s unnecessary use of violence that resulted in such taking somebody’s life, up to the revengeful practice that took place in Dallas.

It’s all a manifestation of total disregard to human lives, an act of brutality abhorred by all religions, and it’s also a wakeup call that the society is in serious need to having a self-dialogue with itself, uprooting all causes of such hate violence and racial attacks that bring nothing but sadness to the whole community.

In preserving human lives, Islam does not discriminate, nor does it give any preference to a certain life over the other; all lives matter in the eyes of Islam, even the life of an unborn child, there are certain prescribed punishments for any malicious child destruction in Islam.

All this is premised on a principle that, apart from piety (taqwa) and good deeds, there is no distinction given to anybody, in a sense that such person would claim a certain level of privilege and advantages over others. The Prophet of Islam, Muhammed, peace and blessings be upon him, has made this clear in one of his sayings:

Perhaps, one of the root-causes of this problem is the way the society perceives and reacts to such incidents. It seems there is a sense of discomfort from certain quarters of society who feel they are treated differently, and being discriminated against, hence the slogan of “Black Lives Matter”.  Perhaps this is one of the areas the society needs to quickly look into if it really wants to get rid of this problem once and for all.  But by addressing it, the society needs to dig down and lay its hand on all what contributes to fomenting ethnic hatred, discrimination and racism, filling hearts with a sense of mistrust, anger and fear; the society after all belongs to all.