Let me start answering this question by the following conclusion: The House of Allah is never “off-limits” for any believer, man or woman, at any time.

Jurists have considerably deferred regarding staying in the mosque for a menstruating woman and a junub[1] person without performing ablution, as Almighty Allah says,

{O you who have believed, do not approach prayer while you are intoxicated until you know what you are saying or in a state of janabah, except those passing through [a place of prayer], until you have washed [your body]} (An-Nisa’ 4: 43).

So, the Hanbali jurists deemed it permissible for such a person to stay in the Mosque in case one has performed ablution (Wudu’), drawing on the Hadith narrated by Sa`id ibn Mansur and Al-Athram from `Ata’ ibn Yasar that he said, “I saw junub Companions of the Prophet (peace and blessings be upon him) staying in the Mosque after performing the ablution due for prayer”.

Other jurists, however, deemed it permissible for ajunub person and for a menstruating woman or a woman in her postpartum period (nufasa’) to stay in the Mosque whether they have performed ablution or not, since no authentic Hadith is reported to this effect. Besides, the Hadith that reads, “I do not allow a menstruating woman or a junub person to enter the mosque” is ranked weak. Hence, there is no solid proof prohibiting it, and in turn the default ruling of permissibility remains applicable. 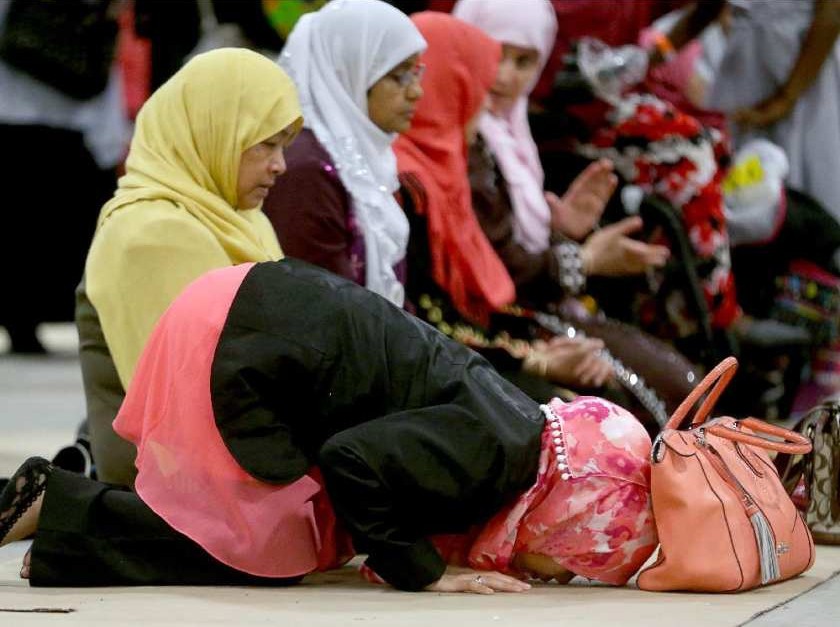 Did the Prophet (PBUH) Discourage Women’s Visits to Mosque?

This view is maintained by Imam Ahmad, Al-Muzni, Abu Dawud, Ibn Al-Mundhir and Ibn Hazm. They all drew for evidence on the Hadith narrated by Abu Hurayrah and recorded in Al-Bukhari and Muslim and other Hadith compilations that “A Muslim never becomes impure“.

I personally incline towards this opinion given the available proofs and on our approach of making things easy and lifting distressful hindrances for the Muslim, especially for a menstruating woman. For, she is more entitled to such facilitation than a junub person, sincejanabah is a willingly incurred state that can be lifted by the man whenever he wishes, i.e. through Ghusl [ritual bath]. It is different from menstruation, which Allah has predestined for females; a woman cannot lift it willingly or finish it before its due course. Therefore, a menstruating woman is more entitled to be excused than a junub person.

Moreover, some women need to frequent the mosque in order to attend religious lessons or the like, and thus they should not be prevented access to it.[2]

The Hadith quoted here by Shaykh Al-Qaradawi, “I do not allow a menstruating woman or ajunub person to (enter) the mosque” is part of the Hadith narrated by Abu Dawud through his own chain of narrators from (Jasrah bint) Dijajah that she said: I heard lady `A’ishah (may Allah be pleased with her) say,

“The Messenger of Allah came and saw that the doors of the houses of his Companions were facing the Mosque. He said, ‘Turn the direction of the houses[‘ doors] away from the Masjid’.

The Prophet then entered and the people did not take any step in this regard hoping that some concession might be revealed.

He came upon them again and said, ‘Turn the direction of these (doors) from the Masjid; I do not permit a menstruating woman or a junub person to (enter) the Mosque’.

(Another narration contained the phrase, “except for Muhammad and the household of Muhammad”). Yet, this Hadith is graded as weak – as stated above -, though some jurists cited it as evidence. It was ranked as a weak hadith by Al-Bukhari, Ahmad and Al-Bayhaqi and the modern scholar Al-Albani.[3]

We already referred to the Hadith narrated by lady `A’ishah (may Allah be pleased with her) about the freed African slave who came to the Prophet and embraced Islam and “had a tent or a small room with a low roof in the Mosque”.[4]

Explaining how this hadith implies the permissibility of staying in the Mosque for a menstruating woman, Ibn Hazm stated,

“This was a woman residing in the Mosque of the Prophet (peace and blessings be upon him), and as a woman, she normally have menses. Yet, the Prophet did not prevent her from staying there and whatever is not banned by the Prophet is lawful.[5]

[1] A junub man is a man in a state of ritual impurity due to seminal discharge or sexual intercourse.