Though this last opinion seems to be most likely, the surah is cohesive and coherent as it has one main theme, that is, hypocrisy, insincerity, and pretension. 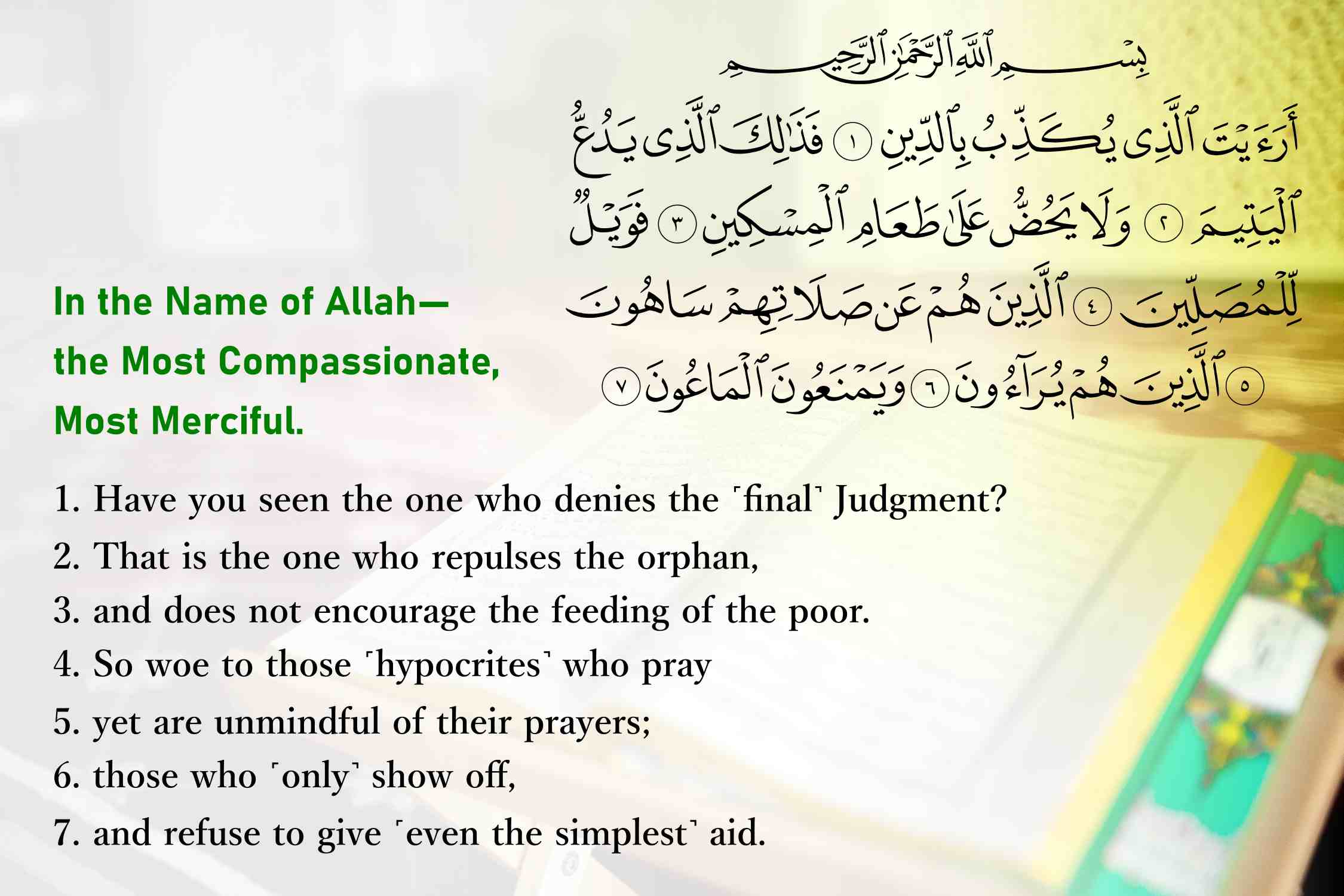 The overall theme of Surah Al-Ma`un

The religion of Islam is not a religion of appearances or meaningless rituals. Unless the acts of worship we are doing are characterized by perfect sincerity to Allah and also positively influencing the lives of others around us, Muslims and non-Muslims alike, these acts of worship are deemed null and void. 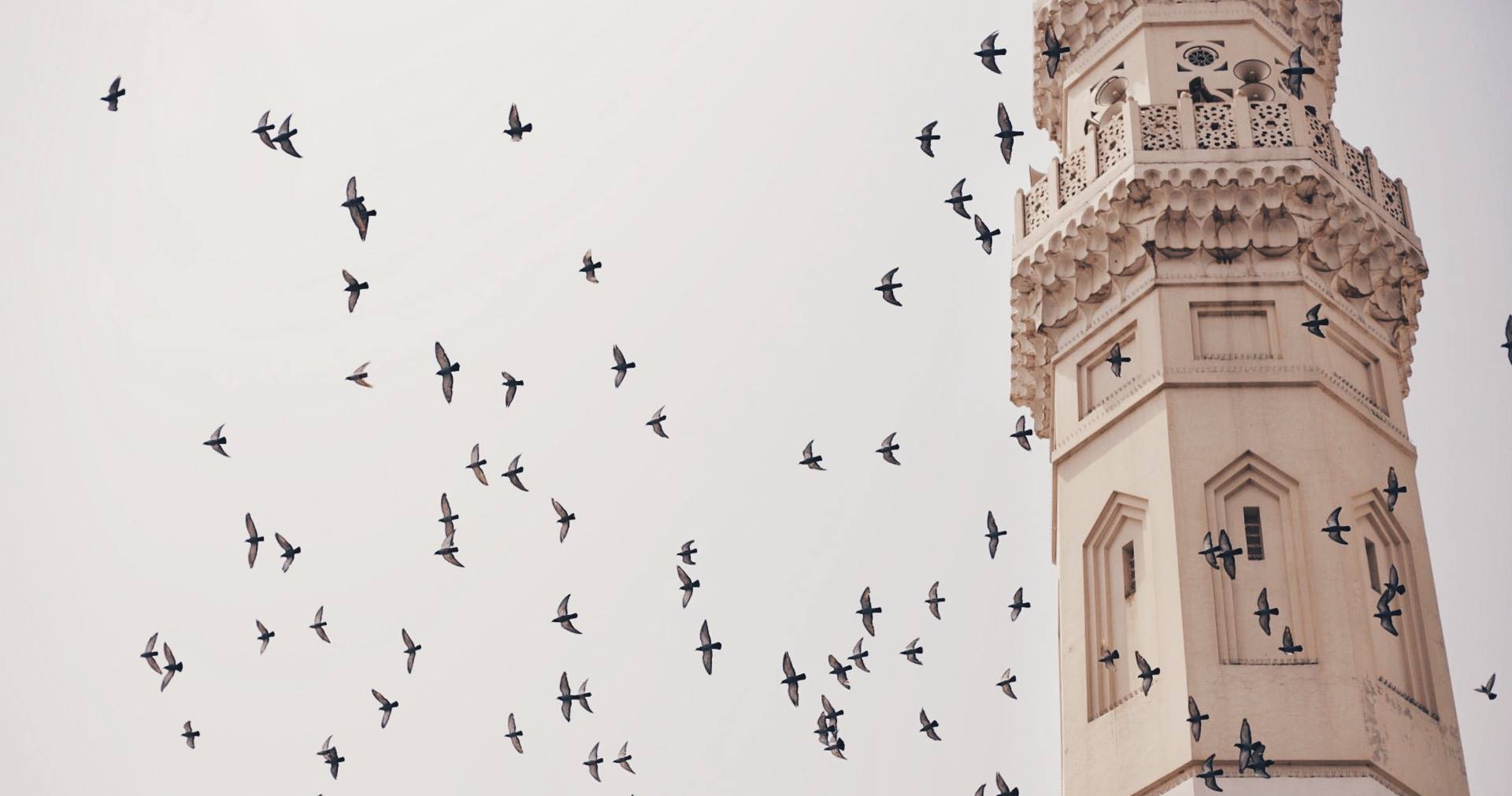 What Prophet Said When He Arrived in Madinah

As the religion of Islam is complete and comprehensive, it is not acceptable to abide by some of its ordinances while neglecting others. This is explicitly referred to in Surah Al-Baqarah (2:85).

Likewise, as the Prophet was sent as a mercy to the world, the Shari`ah he brought is definitely a mercy to the whole world. That is why all acts of worship, both individual and collective, when combined together, create a condition of integration and mercy. This then affects and changes the lives of all human beings for the better.

There are signs that can prove whether we are true believers. Anyone can claim to be Muslim; they may even perform prayers and other rituals. However, this claim is proven through tangible actions and concrete deeds.

Surah Al-Ma`un presents us with a benchmark that identifies a real Muslim.

Ad-Din: This term stands for religion, faith, the Hereafter, or the final reward. This may mean that if one denounces any of these, he will be regarded as denying the religion in its entirety.

Sahun: This may refer to:

Consequently, whoever has any of the above characteristics, a portion of this ayah applies to him.

Al-Ma`un: Small tools and utensils people usually lend to each other, like an axe, a pot, a bucket, and the like.

But, who is the one who denies religion?

Surah Al-Ma`un starts with this question: “Have you seen him who denies religion?”

The most likely answer is the one who denounces faith and refuses to be a worshipper of God, or refuses to believe in the  the Hereafter.

To the reader’s surprise, the surah gives a totally an unexpected answer:

“It is he who thrusts the orphan away,

Is this really the one who denies religion?!

Surely, he is, as the Qur’an states it clearly.

It depicts a portrait of a person who is hard on the orphan, treats him harshly as he pushes him away and snubs him.

Not only that. The one who denies religion is the one who “does not urge others to feed the needy.”

One should do good and advise others to do good as well. Bringing happiness to society is both an individual as well as a collective duty. A true believer in God can never be inactive in any way.

In short, Allah does not want us to utter mere words that are void of any reality. He, Glory be His, wants us to walk the talk and be exemplary models of what we preach and say. Indeed, actions speak louder than words!

So, these three verses explain the reality of this faith in a very tangible and concrete way. 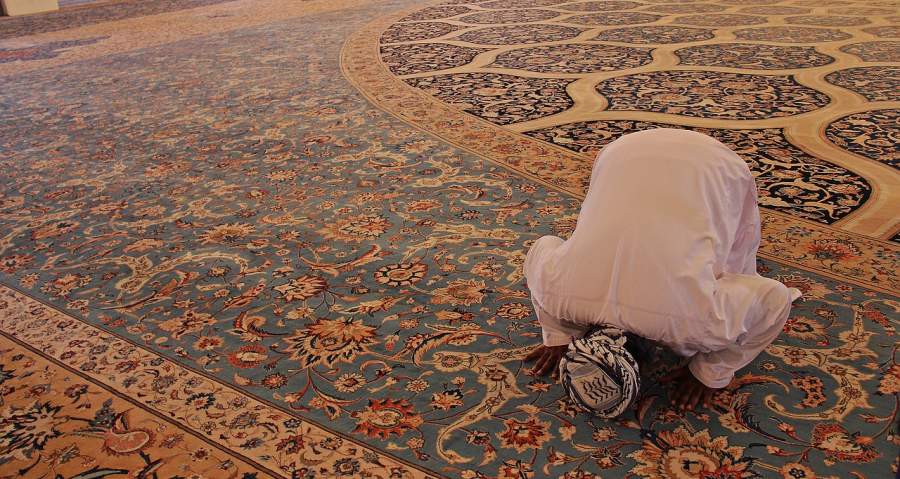 5 Daily Prayers and 5 Opportunities for Forgiveness

Surah Al-Ma`un also introduces us to another example of that reality. It’s the ones who perform the prayers but at the same time they are careless of their prayers.

They use their prayers as a way to  show off. They try to put on the cloak of piety to deceive others all the while their hearts are distracted or negligent.

Furthermore, the ones who deny religion, also fail the practical test of being helpful and useful to their fellow members of society. They “refuse to give even the smallest help to others“, which is described in the Surah as al-Ma`un.

If you are a true believer in Allah, and your prayer has a real impact on your heart, this impact should appear in your actions.

You should use what Allah bestowed upon you to benefit others and make their lives easier.

You were given tools and things as a test whether you would help others, which is an obligation on you.

A line should be drawn between showing off and being pleased with one’s obedience to Allah. Showing off is to do good deeds only to be seen by others. But if one does a deed sincerely for Allah’s sake, and people come to know about it, then this is not considered showing off.

To conclude, Allah the Almighty does not need anything from His creation. Instead, He gives us all that can make our lives happy and enriched. He wants us to lead a life that is full of integration, love, fraternity, mutual understanding, and good conduct.

The people described in the Surah are those who do not worship their Lord well, nor do they treat His creation well.

Never be one of these!