Funeral in Patani | Much interest and debate surround the question of what happens to one's consciousness as one's body dies.
aaa
It is He Who gives life, and causes death, and to Him you (all) shall return. (Surat Yunus 10:56). Death is the termination of all biological functions that sustain a living organism. Bodies of living organisms begin to decompose shortly after death.

Biologists now see physiological death as a process, more than an event; conditions once considered indicative of death are now reversible.

Where in the process a biologist draws a dividing line between life and death depends on factors beyond the presence or absence of vital signs.

In general, clinical death is neither necessary nor sufficient for a determination of legal death. Doctors can legally pronounce a person dead without clinical death occurring even if this patient has working heart and lungs, yet suffers a brain death.

Senescence refers to a scenario when a living being is able to survive all calamities, but eventually dies due to causes relating to old age. Animal and plant cells normally reproduce and function during the whole period of natural existence. But the aging process derives from deterioration of cellular activity and ruination of regular functioning.

Aptitude of cells for gradual deterioration and mortality means that cells are naturally sentenced to stable and long-term loss of living capacities, even despite continuing metabolic reactions and viability.

Almost all animals who survive external hazards to their biological functioning eventually die from biological aging; known in life sciences as senescence.

From all causes, roughly 150,000 people die around the world each day. Of these, two thirds die directly or indirectly due to senescence. As scientific knowledge and medicine advance, a precise medical definition of death becomes more problematic.

The following infograph informs us summarily and easily about the processes affecting our bodies after death: 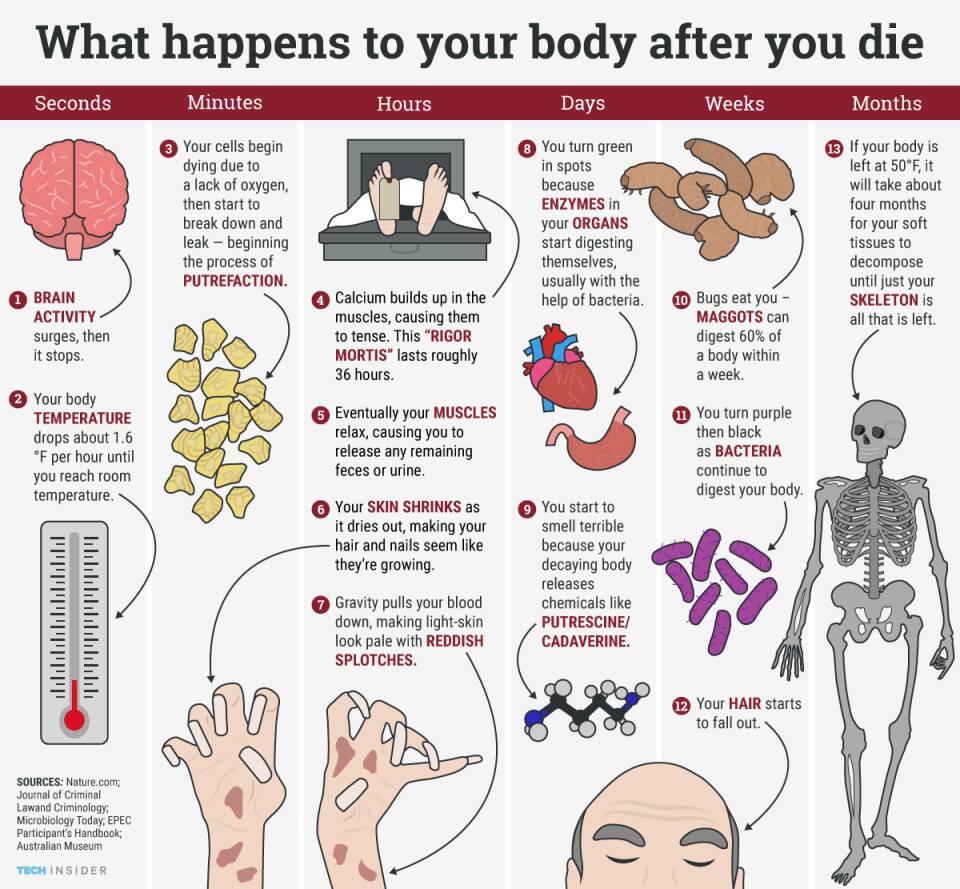