The OLED technology empowers video displays of almost all devices in the coming future.
aaa

Having an 80-inch-high-definition television that can be rolled up after turning off, digital newspaper that refreshes with breaking news and can be folded like a regular newspaper, or having a display monitor built into your clothing can be possible very soon with the help of a technology called Organic Light-emitting Diodes (OLEDs).

The OLED technology empowers video displays of almost all devices in the coming future. Whether it is television, mobile phones, gaming consoles or handheld devices, all are sure to get OLED displays in the future. Lighting systems based on OLEDs are making applications of lighting sources possible, including ones that are transparent and flexible.

OLEDs are semiconductors consisting of two or three thin layers of organic compounds situated between two electrodes. With the application of electric current, the electrons move between the electrodes emitting light.

The thickness of the OLED devices is about 100 to 500 nanometers, or much thinner than a human hair (17,000 – 180,000 nanometers). The main part of the OLED manufacturing process is applying the organic layers to a layer called substrate. Usually the substrate is made of glass, clear plastic, or foil. This process is done using evaporation techniques.

How Do OLEDs Emit Light?

OLEDs emit light in a similar manner to Light-Emitting Diodes (LEDs), through a process called electrophosphorescence.

Professor Karl Leo is the director of the Fraunhofer Institute for Photonic Microsystems in Germany. His crew has been working on OLED since 2000. They are now working under the umbrella of the Center for Organic Materials and Electronics Devices Dresden or (COMEDD). It is one of the biggest research centers specialized in research and development as well as the pilot production of devices and fabrication technologies based on semiconducting organic materials.

“We are now involved in OLED lighting, because we see tremendous opportunities in OLED lighting for the future. Especially as a European research institute we see more possibilities in lighting solutions because the lighting industry in Europe is still strong. So we have to keep the business in Europe by strengthening the industry through future lighting solutions.” Leo told Oled-info.com 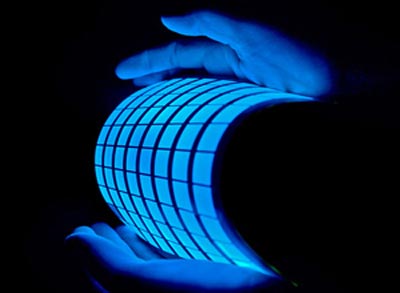 OLED is widely being considered as the next generation of environmentally friendly lighting technology and has more advantages over the conventional display technologies.

OLEDs are thinner, lighter and more flexible than conventional Light-emitting Diodes or Liquid Crystal Displays (LCDs.) OLEDs also use much less power, are easier to produce, and can be manufactured in large sizes and surface areas.

Another great advantage of OLED is that it creates more durable screens than traditional ones. The possibility of an OLED screen getting broken is small compared to other displays.

In addition, it provides a viewing angle as large as 170 degrees, and it is good for the eyes because it allows for better contrast, brightness and color aspects.

OLED not only turns electricity into light, it can turn light into electricity as well. When exposed to bright light the reaction is reversed and an electric current flows out of the OLED. This is one more significant advantage of OLEDs.

Researchers at the COMEDD center have used this reverse feature to create organic solar cells that can provide electric sources for the regions that lack energy sources.

Although OLED, to a large extent, is a perfect technology with many advantages, it has some problems and limitations. The major disadvantage is that OLED has a short lifespan compared to LCDs and LEDs. While red and green OLED films have longer lifespans (46,000 to 230,000 hours), blue organics currently have much shorter ones (up to around 14,000 hours).

Another two disadvantages are that OLED displays can’t be viewed well in a place where there is direct sunlight, in addition to the high sensitivity to water.

One last important disadvantage of OLEDs is the high cost of the technology at the current time, but it is expected to come down as the technology becomes more popular.

Leo said: “Prices will go down and the size will grow. To achieve real general lighting products, we have to still solve many fabrications and cost aspects.”

He also said that their target is to cut down the price from €100 to €50 (US$ 130 – 65) per square meters, and to achieve this, research centers should also be designed for a large production market to scale up the production to larger volumes.

Sony Corporation announced in 2004 the beginning of mass production for OLED screens for a model of its personal-entertainment handhelds. However, Kodak was the first to release a digital camera with an OLED display in 2003.

Samsung has predicted that this technology is certainly going to find a way for itself if not now then in future.

The OLED display market is expected to reach $6.3 billion dollars by 2018 according to Dolcera market research, the international services firm specialized in intellectual property and competitive strategy. Europe is currently the leader in OLED lighting in terms of project numbers, government funding, and participating companies.