The Qur’an (12:13) tells us that, “He hath constrained the night and the day and the sun and the moon to be of service unto you…”

Nowhere is this more evident than in the case of solar energy. In fact, a big number of the Muslim countries where sunny days are abundant, the sun is the ideal renewable energy source of the future.

The manner by which the sun provides energy to the earth and the non-polluting nature of that energy are key factors in its popularity in some Muslim nations.

The history of large-scale solar energy use dates back to the Muslim World as well when the American inventor Frank Shuman built the world’s first solar power station in Maadi, in south Cairo, Egypt between 1912 and 1913.

Solar energy provides electricity via photovoltaic cells. Sunlight reaching the land surface of our planet can produce the equivalence of 1,600 times the total energy consumption of the world; the amount of solar energy derived from the sun’s radiation on just one square kilometer is about 4,000 megawatts, enough to light a small town. Yet, solar energy produces none of the byproducts associated with crude oil and natural gas.

Deep in the core of the sun, hydrogen nuclei combine to form helium; then releasing the perpetual energy that has been contained by man and used for fuel energy, to grow food, and in the making of many man-made products that would not exist without the sun.

As of 2017, the largest solar thermal power station in the Muslim World is Morocco’s Noor I-160 Megawatt(MW) parabolic trough which is located in Ghassate, Ouarzazate Province. Morocco will complete this project in 2018 with the 2nd plant Noor II of 200MW.

Not only that, but the North African kingdom is also planning to construct a huge 1,540MW-Solar Energy Project in Ain Bni Mathar, Foum Al Quad, Boujdour, in Sebkhat Tah.

Shell Petroleum Group predicted as far back as 1995 that, by the year 2050, solar power would be our main source of electricity. Several projects have been slowly developing along this timeline.

Although passive heating of water by solar energy for domestic purposes has provided only 2% of total energy use in Jordan and 3.5% in Palestine, the savings incurred in the initial phases of its use has already allowed these countries to pay back their investment costs in the project.

Four projects by Friends of the Earth provided solar power facilities to communities that lack power and water resources such as Arab Ka’abneh, Al Maleh, Ammoriah, and Qairout in Palestine. This system includes as desalination plant and generators to power reverse osmosis water with a peak power of 250 kilowatt peak (kWp).

Being able to pump water from rural springs will allow the population of 4,420 to have solar electricity supply and desalinated water for domestic and communal use.

Basis village in Egypt of 600 people has 70 solar housing systems, street lights, communal use, and facilities to provide electricity for their local capacity. 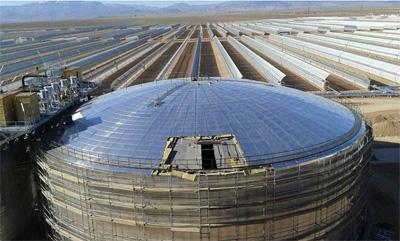 According to 2015’s reports, the Muslim country which owns the biggest installations of solar power capacity is Pakistan with 1,600MW.

The interest and growth in the use of solar energy should continue increasing in the next few years as awareness of the blessings in our physical environment expands among mankind.

In the near future, Insha’Allah, many more people around the world will be enlightened by the meaning of the Qur’anic verses (1-6) found in Sura Al-Shams: “I swear by the sun and its brilliance and the moon when it follows the sun, and the day when it shows it and the night when it draws a veil over it, and the heaven and Him who extended it.”