“It is He who created the night and the day and the sun and the moon. All (the celestial bodies) swim along, each in its orbit.” (Surat Al-Anbya 21:33).

Narrated Al-Mughira bin Shu’ba: On the day of Ibrahim’s death, the sun eclipsed and the people said that the eclipse was due to the death of Ibrahim (the son of the Prophet). Allah’s Apostle said, “The sun and the moon are two signs amongst the signs of Allah. They do not eclipse because of someone’s death or life. So when you see them, invoke Allah and pray till the eclipse is clear.”

This is how Islam sees the motion of our star (the Sun) and our natural satellite (The Moon) in the Holy Qur’an and Prophetic Sunnah. 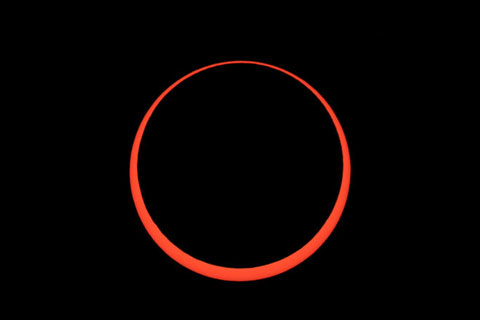 The current eclipse is the second solar eclipse of the year. In March there was a total eclipse across Southeast Asia into the central Pacific.

Annular Solar Eclipses take place when the moon is far from the Earth during its orbit around us. The lunar diameter becomes smaller than the apparent diameter of the sun as it passes in front of us.

This gives the ring of fire effect; the sun shines brightly around the edges of the moon. The greatest eclipse phase in today’s event occurs in the Southern Hemisphere portion of Africa. Some countries included are Gabon, Congo, Mozambique, and Madagascar.

Today’s special event will be witnessed with its full phase also in Tanzania, another African country.

Residents of planet earth won’t see any solar eclipse again until the next annular one in February 2017 in the Southern Hemisphere.