Water is a blessing from Allah. It is vital for our survival and is mentioned many times in the Qur’an.

“It is Allah who sends the winds, and they stir the clouds and spread them in the sky however He wills, and He makes them fragments so you see the rain emerge from within them. And when He causes it to fall upon whom He wills of His servants, immediately they rejoice” (Qur’an, 30:48).

Whilst water is available in abundance for many simply by opening a faucet, it isn’t so easily accessible for others, especially in arid, desert climates.

Many devices have been made to harvest water from the air in arid climates, but they require a certain level of humidity or an expensive power source, such as electricity.

Omar Yaghi, a Jordanian chemist at the University of California, Berkeley worked with Evelyn Wang and colleagues at the Massachusetts Institute of Technology to fabricate a device capable of producing reasonably large volumes of water using solar power in conditions where humidity is as low as 20%.

“The key development here in our demonstration is that we used only ambient sunlight, with no electricity needed,” Yaghi told AboutIslam.

This new device means that sufficient water can be produced even in dry desert climates and provides hope for the billions of people living in areas with limited access to water. 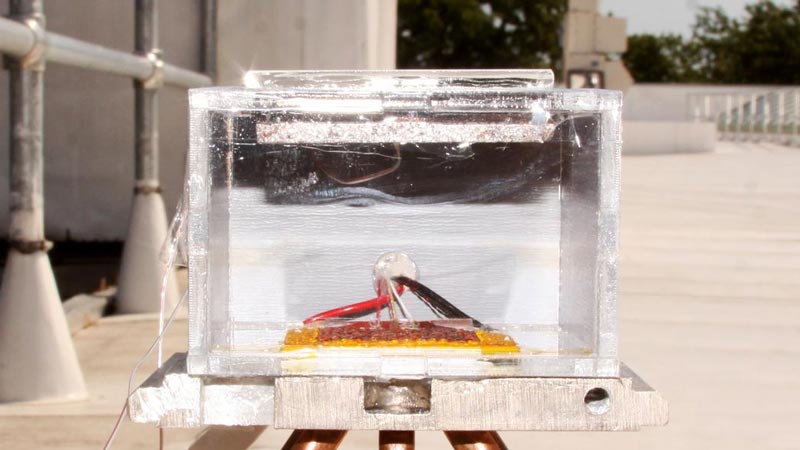 “I believe this is a major breakthrough in the long-standing challenge of harvesting water from the air at low humidity, and is also a significant step towards commercialization,” says Yaghi. “The heart of the breakthrough here is a chemically and topologically unique large-pore material, which has high affinity to pull water molecules out of the air without holding onto them too tightly, allowing water to be concentrated and then released with a slight temperature change generated by natural sunlight.”

“An obvious future direction of this technology is to have water off-grid, where you have a device at home running on ambient sunlight for delivering water that satisfies the needs of a household, which is what I call ‘personalized water’. This technology is also suitable for less extreme climates such as Europe, East Asia, and the United States where one can supplement the device with electricity on days with insufficient sunlight,” Yaghi says.

One device can produce as much as 2.8 liters of water in as little as 12 hours. It collects the minimum daily requirement of 330ml of water in less than an hour.

How Does It Work? 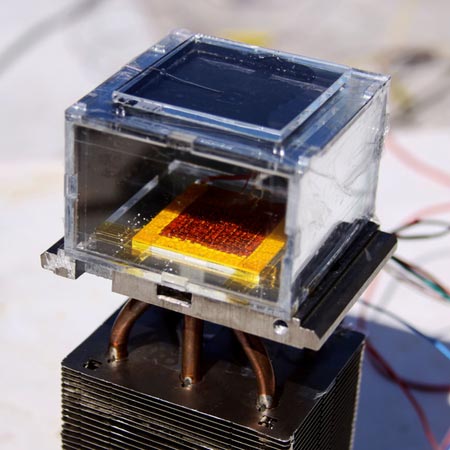 The device is made of metal-organic framework (MOF). MOF works by combining crystalline metal powders, like aluminum or magnesium, with organic molecules creating an absorbent, sponge-like material.

In this device, a kilogram of MOF crystals made from zirconium and adipic acid are compressed between a solar absorber and a condenser plate to bind water vapor.

During the night, air passes through this porous space and water molecules attach to the interior. During the day, the sunlight heats up the device, pushing the water molecules towards the condenser, where they are released as water.

Other devices have been made using this same technology to capture carbon dioxide from chimneys and separate out different types of oil in processing plants.

“We have many other projects for developing MOFs for various functions,” says Yaghi. “These MOF materials have the highest surface areas known to-date, making them useful in many applications including the storage and separation of hydrogen, methane and carbon dioxide; conversion of carbon dioxide to fuels and high-value chemicals; the capture of water from air for freshwater production; highly selective cleavage of peptides using enzyme-inspired catalysis; and storage of ions in supercapacitor devices and transport of protons and electrons in conductive frameworks.”

Now that the device has proven successful, the team is working on ways to further improve it by using cheaper metals, such as aluminum, that can absorb larger volumes of water per weight of the device.

“In addition, these MOF materials could improve the next generation of household dehumidifiers, with equally efficient water extraction performance but with far less electricity consumption. MOFs made of cheaper metals, such as aluminum or iron, can be developed to work as well or better. The formula could be fine-tuned to maximize efficiency for different microclimates,” Yaghi explains.