Al-Khawarizmi | Al-Khwarizmi was a Persian Muslim mathematician, astronomer and geographer during the Abbasid Caliphate, a scholar in the House of Wisdom in Baghdad, Iraq.
aaa

Algebra. Even the word is enough to strike terror into the hearts of junior high and high school students the world over – not to mention send shivers of apprehension down the backs of their parents as they start the process of solving for “x” or “y”, and sometimes both.

However, junior high school students have not always studied algebra. During the ninth century, it was reserved for the intellectual elite. The word “algebra,” like the subject, is a consequence of the intellectual ferment that occurred in Baghdad during the 9th century reign of Caliph al-Ma’mun (813-33).

The “Father of Algebra” is generally acknowledged to be Abu Ja’far Muhammad ibn Musa al-Khwarizmi, born in approximately 786 C.E. Some historians speculate that his name may indicate that he came from the Khwarizmi region, south of the Aral Sea in central Asia.

Al-Khwarzimi was born at a time of great cultural and scientific development in the Islamic world. Harun al-Rashid became the fifth Caliph of the Abbasid dynasty on the 14th of September in the year 786; about the same time that al-Khwarizmi was born. Al-Rashid ruled over an empire that stretched from the Mediterranean Sea to India.

His son, al-Mamun, continued the patronage of learning started by his father and founded an academy called The House of Wisdom, where Greek philosophical and scientific works were translated.

Algebra is the study of mathematical symbols and the rules for manipulating these symbols; it is a unifying thread of almost all of mathematics.

He also built up a library of manuscripts – the first major library to be set up since the famous library at Alexandria – and collected important works from the Byzantine Empire and beyond. In addition to The House of Wisdom, al-Mamun set up observatories in which Muslim astronomers could build on the knowledge acquired by earlier peoples.

Al-Khwarizmi and his colleagues, the Banu Musa, were scholars at The House of Wisdom in Baghdad. At the institute, they translated Greek scientific manuscripts and also studied and wrote on algebra, geometry and astronomy.

Al-Khwarizmi worked under the patronage of Al-Mamun and he dedicated two of his texts to the Caliph. Sometime around 830 C.E., Muhammad ibn Musa al-Khwarizmi composed the earliest known treatment of algebra and started an algebraic line in the Islamic world that persisted for several centuries.

The treatise, Hisab al-jabr w’al-muqabala or The Compendious Book on Calculation by Completion and Balancing, was also the most famous and important of all of al-Khwarizmi’s works, and the title gave us the word “algebra.”

Al-Kwarzimi’s work is generally considered to be the first written on the subject and his reason for writing the work was simple, he intended to teach:

“… What is easiest and most useful in arithmetic, such as men constantly require in cases of inheritance, legacies, partition, lawsuits, and trade, and in all their dealings with one another, or where the measuring of lands, the digging of canals, geometrical computations, and other objects of various sorts and kinds are concerned.”

Conceived as an elementary textbook of practical mathematics, the Al-jabr wal-muqabalabegan with a discussion of the algebra of first and second-degree equations and moved on in its final two parts to the business of practical applications to questions of mensuration and legacies.

The book starts by introducing the natural numbers, and then introduces the main topic of the book’s first section – the solution of equations. All the equations are linear or quadratic and are composed of units, roots and squares. It is interesting to note that in all of al-Khwarizmi’s books, mathematics is done entirely in words and with no symbols (e.g. x 2 ) being used.

He first reduces an equation (linear or quadratic) to one of six standard forms:

The reduction is carried out using the two operations of al-jabr and al-muqabala. To al-Khwarzimi “al-jabr” means “completion” and is the process of removing negative terms from an equation. For example, using one of al-Khwarizmi’s own examples, “al-jabr” transforms x 2 = 40x – 4 x 2 into 5 x 2 = 40x.

Al-Khwarizmi then illustrates how to solve the six standard types of equations using algebraic methods of solution and geometric proofs. 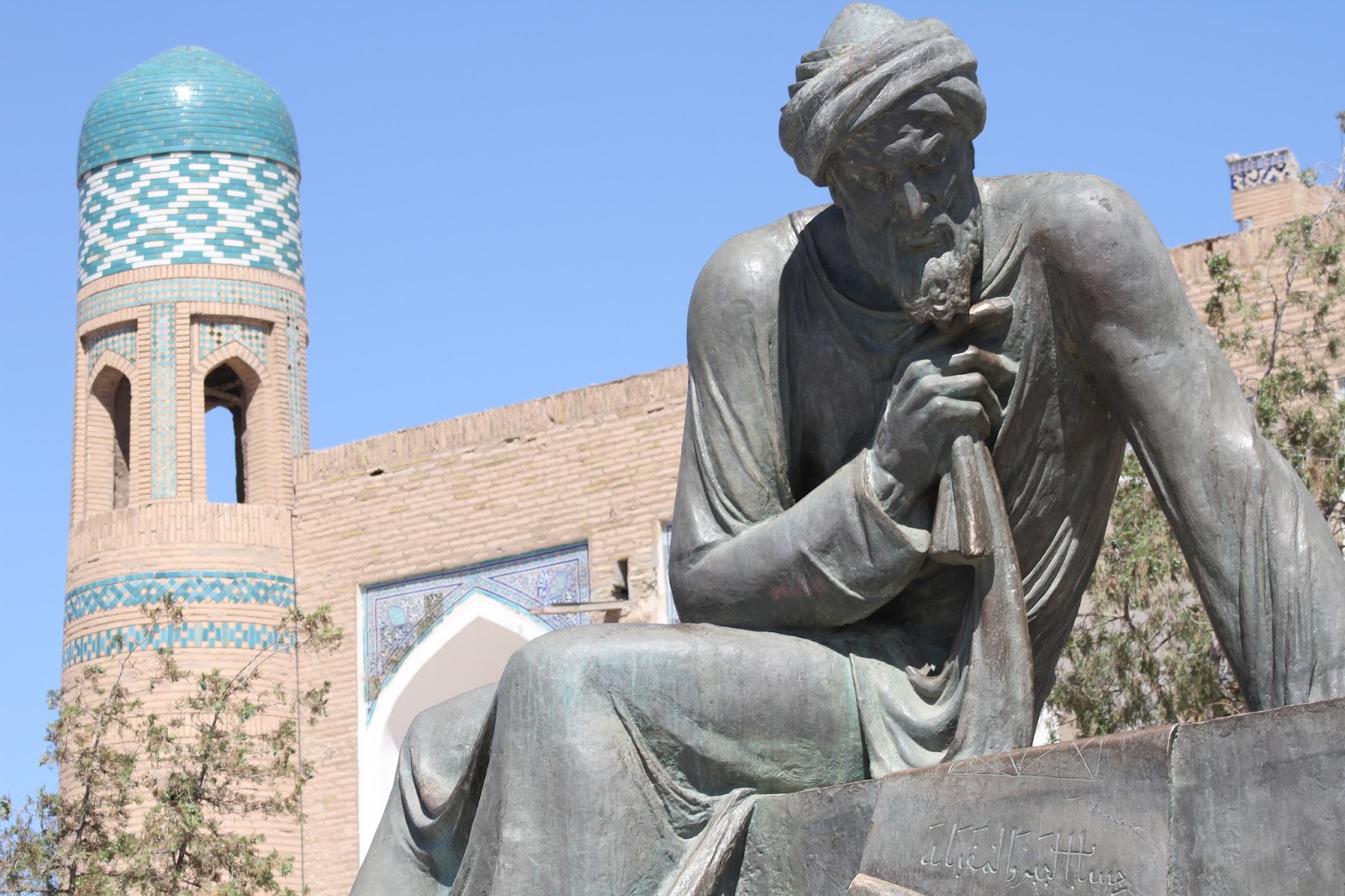 Modern statue of Al-Khwarizmi at Khiva in Uzbekistan.

Al-Khwarizmi continues his study of algebra in Hisab al-jabr w’al-muqabala by examining how the laws of algebra extend to the arithmetic solutions of algebraic objects. For example, he shows how to multiply out expressions such as (a + b x) (c + d x).

Al-Khwarizmi also wrote a treatise on Hindu-Arabic numerals. The Arabic text is lost but a Latin translation – Algoritmi de numero Indorum, and an English one – Al-Khwarizmi on the Hindu Art of Reckoning, gave rise to the word “algorithm” deriving from al-Khwarzimi’s name in the title.

Last but not least, Al-Khwarizmi authored a major work on geography, which gives latitudes and longitudes for 2,402 localities as a basis for a world map. A number of other minor works on topics such as the astrolabe, the sundial, and the calendar were written by al-Khwarizmi. He also wrote a political history containing horoscopes of prominent persons. He died in Baghdad, Iraq in approximately 850.