“My problem was that technology doesn’t help us express who we really are.” That’s how Islamoji app’s developer Sakeena Rashid  talked about the inspirational ideas behind her app.

Islamoji app is simply a custom emoji keyboard that you can add to your iPhone, and thus be able to use in various chat/text applications.

The app, expected to be launched by the beginning of May 2017, has some interesting features like resizing your emoji and changing its skin color.

There is an option where you can add sayings and emoji stickers on top of texts. Rashid also added animated GIFS and iMessage extension of iOS 10+ update through which you can create and share content without leaving your conversation.

You also don’t have to switch back to your standard keyboard to compose a message, send texts and Muslim emojis within the app. Additionally, Islamoji is compatible with Facebook Messenger, WhatsApp, iMessage, text message & other apps. The app is divided into eight categories plus animated GIFS. 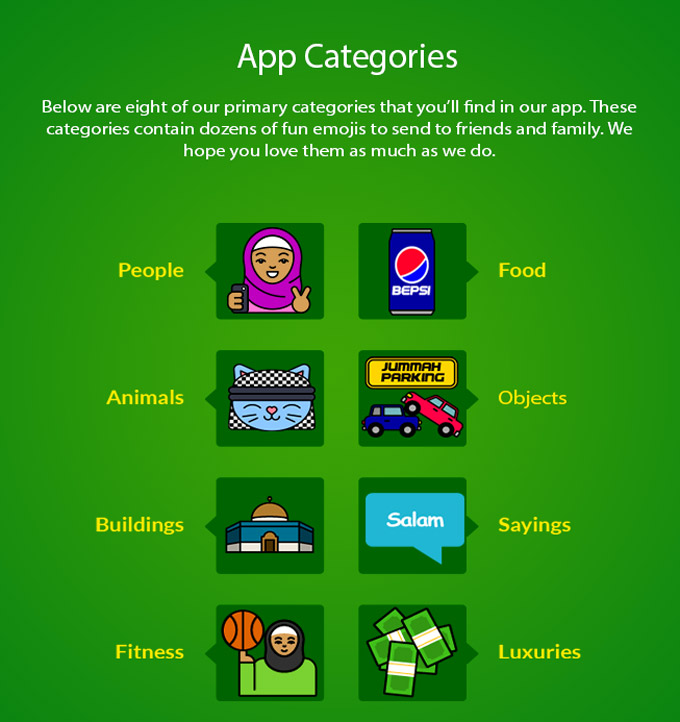 Sakeena Rashid created a well-defined plan and outline which depend both on her own personal funds and marketing profits. 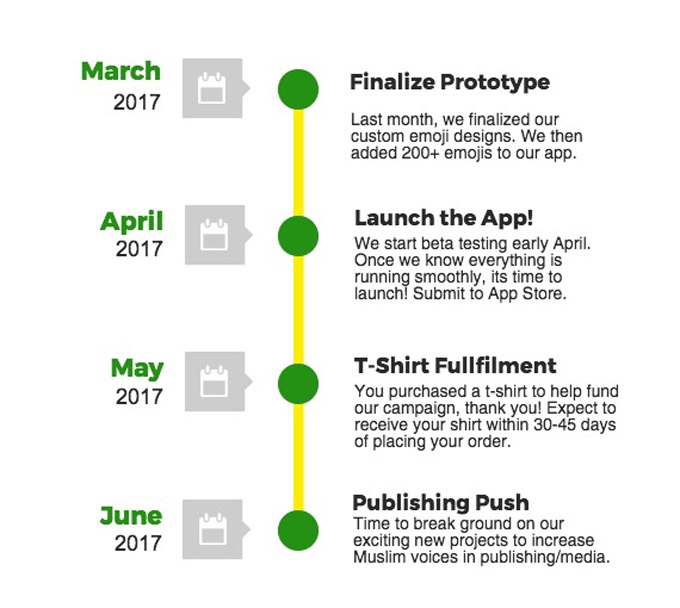 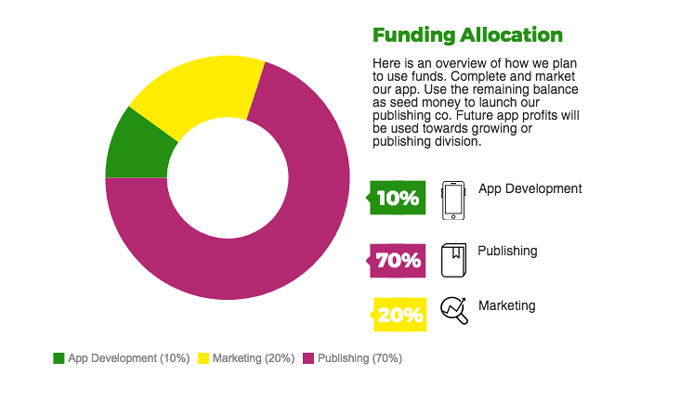 One of her ideas on raising funds for this app is promotional t-shirts. You are invited to enter the size and style name when ordering your shirt. Available sizes are S, M, L, XL (ONLY) in both t-shirts and hoodies. 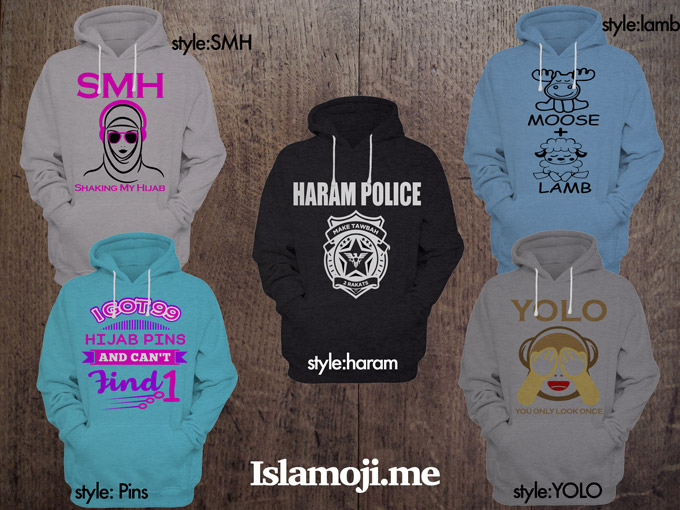 The Muslim African American mother is the founder of Deeni Girl Media (DGM), she’s experienced in taking ideas from concept through to manufacture, and she’s specialized in self-publishing, content development, web design, and social media marketing.

Rashid’s larger plan is to dedicate a specific percentage of her app’s future profit to everlasting charitable contributions.

The developer also tries to give Muslims a platform to tell their own stories and showcase the reality of our Muslim World’s diversity.

In her interview with Theresa Corbin of IslamWich, Rashid informed that she started to get into content development some eleven years ago.

islamwich: What inspired you to get into the emoji game and bring some Islamic flare to it?

Rashid: Well, it kind of all started with the celebrity emoji craze about a year ago. You started seeing these famous stars coming out with their own emoji keyboards, and it made me think, if they can have one I wonder if a Muslim emoji keyboard could be created?

I started researching it, but at the same time thought if celebrities were doing it, of course I wouldn’t be able to afford to create an app like that. I continued my research anyway and discovered that it was feasible. I had never created an app before, and I was determined to learn everything I could about the process.

I bought app courses, watched webinars, joined developer groups and read dozens of case studies until I felt like I had a solid roadmap in front of me, where I knew I could not just start this project, but finish it.

islamwich: With the publishing company you hope to grow from this, what kind of works do you hope to publish? Muslim memoirs? fiction? guides?

Rashid: All of the above and more. Years ago, I wrote down the types of books that I wanted to publish under DGM. Today, most of those titles still have not been published by Muslim authors. We would love to bring Muslim fiction to center stage.

There is room for business books, how-to guides and myriad of non-fiction titles need to be written. And of course, memoirs have to be a part of that. There are so many amazing Muslims that have these enchanting stories that just need to be told.

We also have a strong passion for children’s books, and more Muslim authors are gravitating towards that genre. So, we hope to offer a variety of titles that our community can enjoy and benefit from.

Rashid: Probably about 11 years ago. I started writing freelance articles, had a few articles published and then I began blogging. Later on, I self-published The Ultimate Guide to Hijab Style and Fashion. I sold it as an ebook on Amazon, and received very positive reviews and media mentions.

I’ve since taken the ebook down to update it and prepare it for print. I’ve written a lot for myself, lots of poetry and more recently a non-fiction project that chronicles dealing with death and dying from a Muslim’s perspective.

islamwich: It is so important for our girls, Muslim and non-Muslim, to feel confident to get into STEM careers? When and why did you become an advocate of this?

Rashid: I guess it all started with my own daughter, she has always wanted to become a doctor. When she was 5 years old for career day, she dressed up as a doctor. She’s now 12 and earlier this year, once again she’s having me buy her a stethoscope and doctor bag for career day.

So, I’ve always had to stress to her the importance of science and math if she’s going to fulfill that dream. Alhumdulilah she’s on honor roll so I must have done something right, but she’s just very driven on her own. She loves to see that A on her paper, and when I work with her on her science projects it seems like she tries harder. So, I think that’s an important takeaway for parents, when we’re able to create something with them, it means more to our kids.

STEM for girls is something that’s so important and I believe it can really be limitless as to where it can take youth in the future. I want to be part of that growth within our community and I hope that DGM will be able to contribute to that by offering fun STEM workshops and publications for our girls.

islamwich: Are you a heritage Muslim or a convert to Islam?

Rashid: I was born Muslim. My parents both converted to Islam as teens (separately), got married and had seven children. My mom and father both had one or two other relatives who converted around the same time. So, I grew up with this huge network of Muslim cousins on both sides of the family -which was awesome.

That was back when people had larger families. My Muslim aunts and uncles had six and seven children each, so there was no shortage of Muslim familial identity when I was coming up.

islamwich: Where are you from? (I hate it when people ask me this, so I’m sorry. But I know the audience will be curious)

Rashid: I was born and raised in Michigan as was my mother. My father was born in Ohio and both sets of grand-parents and great-grand-parents were born in the U.S. as well.

islamwich: How much will the app cost? Will it be available for android as well?

Rashid: The app will be $1.99, and include 200+ Muslim emojis, GIFs, and stickers. And yes, we do plan to release an Android version within a few months of the launch of the iPhone/iOS version.