In 1236 Ibn Nafis moved to Egypt and worked in Al-Nassri Hospital then in Al-Mansouri Hospital where he became the chief of physicians.
aaa

Ala-al-Din Abu al-Hasan Ali Ibn Abi al-Hazm al-Qarshi al-Dimashqi (known as Ibn Al-Nafis) was born in 1213 A.D. in Damascus. He was educated at the Medical College Hospital (Bimaristan Al-Noori) founded by Noor al-Din Al-Zanki. Apart from medicine, Ibn al-Nafis learned jurisprudence, literature and theology. He thus became a renowned expert on the Shafi’i School of Jurisprudence as well as a reputed physician.

In 1236 Ibn Nafis moved to Egypt and worked in Al-Nassri Hospital then in Al-Mansouri Hospital where he became chief of physicians and the Sultan’s personal physician. When he died in 1288 A.D. he donated his house, library and clinic to the Mansuriya Hospital.

The most voluminous of his books is Al-Shamil fi al-Tibb, which was designed to be an encyclopedia comprising 300 volumes, but was not completed as a result of his death. The manuscript is available in Damascus. His book on ophthalmology is largely an original contribution and is also extant.

His book that became most famous, however, was Mujaz al-Qanun (The Summary of Law) and a number of commentaries that were written on this same topic. His commentaries include one on Hippocrates’ book, and several volumes on Ibn Sina‘s Qanun, which are still extant.

Likewise he wrote a commentary on Hunayn Ibn Ishaq’s book. Another famous book embodying his original contribution was on the effects of diet on health entitled Kitab al-Mukhtar fi al-Aghdhiya.

His major original contribution of great significance was his discovery of the pulmonary circulation, which was re-discovered by modern science after a lapse of three centuries. He was the first to correctly describe the constitution of the lungs and gave a description of the bronchi and the interaction between the human body’s vessels for air and blood. He also elaborated on the function of the coronary arteries as suppliers of blood to the cardiac musculature. 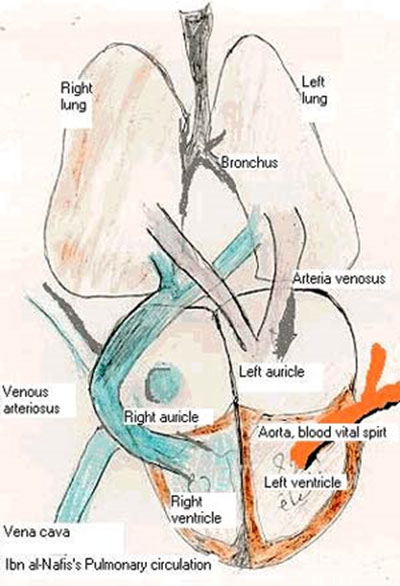 The pulmonary circulation according to Ibn Al-Nafis.

The discovery of the pulmonary circulation is an interesting and much debated topic. It is commonly believed that this discovery had its inception in Europe in the sixteenth century by Servetus, Vesalius, Colombo, and finally Harvey.

However, in view of the discovery of ancient manuscripts, it is proposed that the real credit for the discovery of the pulmonary circulation belongs to an eminent physician of the thirteenth century: Ibn Al-Nafis.

In 1924 an Egyptian physician, Dr. Muhyo Al-Deen Altawi, discovered a script titled, “Commentary on the Anatomy of Canon of Avicenna” in the Prussian state library in Berlin while studying the history of Islamic Medicine at the medical faculty of Albert Ludwig’s University in Germany.

This script is considered one of the best scientific books in which Ibn Al-Nafis covers in detail the topics of anatomy, pathology and physiology. This discovery revealed an important scientific fact, which up to then had been ignored: the first description of the pulmonary circulation.

The theory that was accepted prior to Ibn Al-Nafis was placed by Galen in the second century, who had theorized that the blood reaching the right side of the heart went through invisible pores in the cardiac septum to the left side of the heart where it mixed with air to create spirit and was then consequently distributed to the body.

According to Galen’s views, the venous system was quite separate from the arterial system, except when they came in contact through the unseen pores (3). However, Ibn Al-Nafis, based on his knowledge in anatomy and scientific thinking stated that, “…The blood from the right chamber of the heart must arrive at the left chamber but there is no direct pathway between them.

The thick septum of the heart is not perforated and does not have visible pores as some people thought or invisible pores as Galen thought. The blood from the right chamber must flow through the vena arteriosa (pulmonary artery) to the lungs, spread through its substances, be mingled there with air, pass through the arteria venosa (pulmonary vein) to reach the left chamber of the heart and there form the vital spirit…”

Elsewhere in his book he said, “The heart has only two ventricles …and between these two there is absolutely no opening. Also dissection gives this lie to what they said, as the septum between these two cavities is much thicker than elsewhere. The benefit of this blood (that is in the right cavity) is to go up to the lungs, mix with what is in the lungs of air, then pass through the arteria venosa to the left cavity of the two cavities of the heart…”

He then added, “… The need of the lungs for the vena arteriosa is to transport to it the blood that has been thinned and warmed in the heart, so that what seeps through the pores of the branches of this vessel into the alveoli of the lungs may mix with what there is of air therein and combine with it, the resultant composite becoming fit to be spirit when this mixing takes place in the left cavity of the heart. The mixture is carried to the left cavity by the arteria venosa.” (4)

Another important contribution of Ibn Nafis that is rarely mentioned is his postulation that the nutrition of the heart is extracted from the small vessels passing through its wall, when he said “… Again his (Avicenna’s) statement that the blood that is in the right side is to nourish the heart is not true at all, for the nourishment to the heart is from the blood that goes through the vessels that permeate the body of the heart…” (4) Ibn Al-Nafis was thus the first to put forward the concept of the coronary circulation.

These important observations were not known in Europe until 300 years later when Andrea Alpago of Belluno translated some of Ibn Al-Nafis’ writings into Latin in 1547 (5). Later, Michael Servetus described the pulmonary circulation in his theological book, “Christianismi Restitutio”, in 1553 and wrote, “…air mixed with blood is sent from the lungs to the heart through the arterial vein; therefore, the mixture is made in the lungs.

The bright color is given to the sanguine spirit by the lungs, not by the heart.” (6). It is worth mentioning that the Church accused Servetus of heresy for opposing the teachings of Galen, and was consequently -with his book -burnt at the stake. Andreas Vesalius described the pulmonary circulation in his book “De Fabrica”, in a manner similar to Ibn Nafis’ description.

An interesting observation is that in the first edition of the book (1543), Vesalius agreed with Galen that the blood “… soaks plentifully through the septum from the right ventricle into the left…” Then in the second edition (1555) he omitted the above statement and wrote instead…”I still do not see how even the smallest quantity of blood can be transfused through the substance of the septum from the right ventricle to the left…” (5). Another similar description was given by Realdus Colombo in 1559 in his book “De re Anatomica” (6).

Then it was William Harvey who, in 1628, demonstrated by direct anatomic observation in laboratory animals the movement of blood from the right ventricle to the lung and then observed the blood returning to the left side of the heart via the pulmonary vein and again he stated that he could not find any pores in the interventricular septum. He wrote in his monograph, “Exercitatio anatomica de motu cordis et sanguinis in animalibus”: “I began to think there was a sort of motion as in a circle.

Views of Some Modern Historians 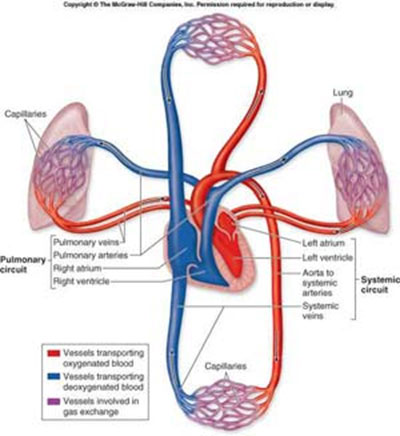 It may be useful to mention the views of a few modern historians who reviewed the works of Ibn Nafis; Mieli said, “We believe that henceforth it is fair to attribute the discovery of the pulmonary circulation to Ibn Nafis who was a distant precursor of the physicians of the sixteenth century Italian School and of William Harvey who, four centuries later, described the whole of the pulmonary circulation in an accurate, clear and definitive manner.”

Max Meyrholf, a distinguished scholar of Arabic historical medicine, stated: “… We have seen that Ibn Nafis, three centuries before Colombo, had already noticed visible passages between the two types of pulmonary vessels.”

In the William Osler Medal Essay on the discovery of the pulmonary circulation, Edward Coppola said, “…The theory of pulmonary circulation propounded by Ibn Nafis in the 13th century was not forgotten and that centuries after his death it may have influenced the direction of the anatomical investigations of Colombo and Valverde, who finally announced it to the Western world as a physiological fact susceptible to experimental proof.” (5)

Sami Haddad (4) from Lebanon published an article in the Annals of Surgery in 1936 about Ibn Nafis and other articles were published also by Ayman et al and Dr. Abdul Kareem Shahadah from Syria showing clearly that Ibn Al-Nafis should be given the credit for the discovery of the pulmonary circulation 300 years before William Harvey was even born!

This article was first published in 2008 and its currently republished for its importance.