Glass | When light strikes an object, it usually has not just a single frequency (or wavelength) but many. Objects have a tendency to selectively absorb, reflect or transmit light of certain frequencies.
aaa

Glass is a non-crystalline amorphous solid that is often transparent and has widespread practical, technological, and decorative usage. For example, window panes, tableware, and optoelectronics.

The most familiar and the oldest types of glass are “silicate glasses”. Their primary constituent is the chemical compound silica (silicon dioxide, or quartz) which also forms sand.

Many applications of silicate glasses derive from their optical transparency, giving rise to their primary use as window panes. Glass will transmit, reflect and refract light; we enhance these qualities by cutting and polishing. This eases making optical lenses, prisms, fine glassware, and optical fibers for high speed data transmission by light.

Some objects historically were so commonly made of silicate glass that they are simply called by the name of the material, such as drinking glasses and eyeglasses.

Scientifically, the term “glass” often defines a broader range of every solid that possesses a non-crystalline (that is, amorphous) structure at the atomic scale. These solids also exhibits a glass transition when heated towards the liquid state. Porcelains and many polymer thermoplastics familiar from everyday use are glasses.

The nations of the Islamic World didn’t only contribute to the glass industry, but they were its first manufacturers as well. The history of glassmaking is traced back to 3,500 BC in Egypt. The Ancient Egyptian Empire has spread this complex industry throughout the civilized ancient world.

Islamic glass continued the achievements of pre-Islamic cultures, especially the Sasanian glass of Persia and Mesopotamia. From Ibn Al-Haytam’s optical lenses and Ibn Hayyan’s chemistry flasks to a mosque lamp of Amir Qawsun, Muslim Civilisation played a major role in inspiring the growth of glass industry from the 8th century onwards.

The influence of the Islamic World to the history of glass is obvious by its distribution around the world. Islamic glass developed a unique expression. It was characterized by the introduction of new techniques and the innovation of old traditions.

In the 8th century, the Muslim chemist Jabir ibn Hayyan described 46 recipes for producing colored glass in Kitab al-Durra al-Maknuna (The Book of the Hidden Pearl). That’s in addition to 12 recipes inserted by al-Marrakishi in a later edition of the book.

During the first centuries of the Islamic Caliphate, glassmakers in the Eastern Mediterranean continued to use the Ancient Egyptian recipe consisting of calcium-rich sand (providing the silica and lime) and mineral natron (soda component) from the Wadi el-Natrun in Egypt.

Examples of natron-based Islamic glass have been found in the Levant up to the late 9th century AD. However, archaeological evidence has shown that the use of natron ceased, and plant ash became the source of soda for all Islamic glass in the following centuries. 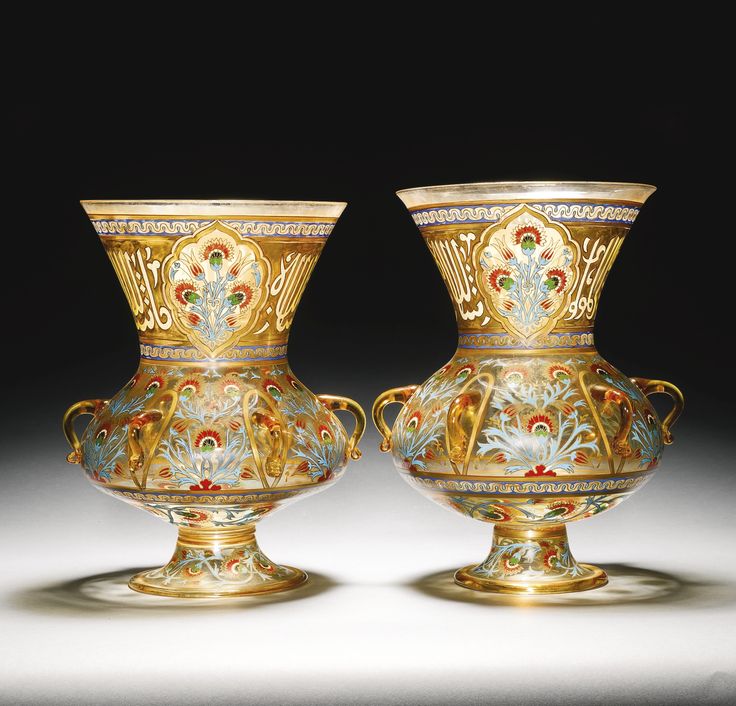 There are various functions of Islamic glass. It filled a multitude of roles throughout the history of the Islamic world.

Some of the more distinct vessel functions from the Islamic period include inkwells, qumqum or perfume sprinklers.

That’s in addition to the vessels associated with Islamic science and medicine such as alembics, test-tubes, and cuppers.

Muslims used glass for aesthetic purposes as well in the form of decorative figurines, and for jewellery as bracelets and beads.

The bracelets, in particular, may prove to be an important archaeological tool in the dating of Islamic sites. Glass also filled various utilitarian roles, with evidence of use as windows, and as coin weights.

The variety of functions filled by glass and the sheer bulk of the material found through excavation further highlights its significance as a distinct and highly developed material industry throughout the Islamic world.

Nowadays, the entire world uses glass in nearly everything; telescopes, microscopes, electronic devices,…etc. All these applications are successful thanks to our medieval Islamic and ancient pre-islamic ancestors.

But have you ever asked yourself, why is glass solid but at the sametime transparent unlike most other solids! To learn about its amazing chemical and physical capabilities which grant it this outstanding property, watch this TEDx video.