ExoMars | ExoMars is a large Mars mission to search for biosignatures of Martian life, past or present. It is an astrobiology mission that is launched from the Muslim country of Kazakhstan.
aaa

We have lift off! ExoMars spacecraft begins its five month journey to the red planet where it will search for signs of alien life.

The spacecraft designed to search the atmosphere of Mars for clues of life on the surface of the red planet has blasted off.

The ExoMars Trace Gas Orbiter (TGO) launched from Baikonur Cosmodrome in the largest Muslim country in the world by area, Kazakhstan aboard a heavy lift Proton rocket at 9.31am UTC, as planned.

It is due to analyse the red planet’s atmosphere to search for low levels of gases such as methane that may betray the presence of life on the Martian surface.

Five minutes before the launch, deputy flight controller, Michel Schmidt said: ‘The spacecraft is now on its own battery and we’re crossing our fingers.’

Scientists believe the probe has the potential to find ‘very strong evidence’ of alien life when it arrives at Mars on 19 October 2016.

ExoMars is a joint endeavour between the European Space Agency (ESA) and Russia’s Roscosmos space agency, comprising two craft – the TGO and the Schiaparelli landing demonstrator.

If all goes to plan, TGO will make a detailed inventory of Mars’ atmospheric gases, with particular interest in rare gases such as methane.

Methane could provide one of the biggest clues to whether life exists on Mars.

On Earth, the chief source of methane is bacteria. Billions of flatulent microbes, including many that thrive in the guts of animals such as cattle and termites, belch out the gas.

But methane can also be released by volcanic activity and geological chemistry.

After a seven-month cruise, the lander will separate from the TGO on 16 October and land on Mars on 19 October.

TGO will then enter orbit around Mars and will serve as a data relay for the second ExoMars mission, which will involve a rover and laboratory on Martian soil, planned for launch in 2018. 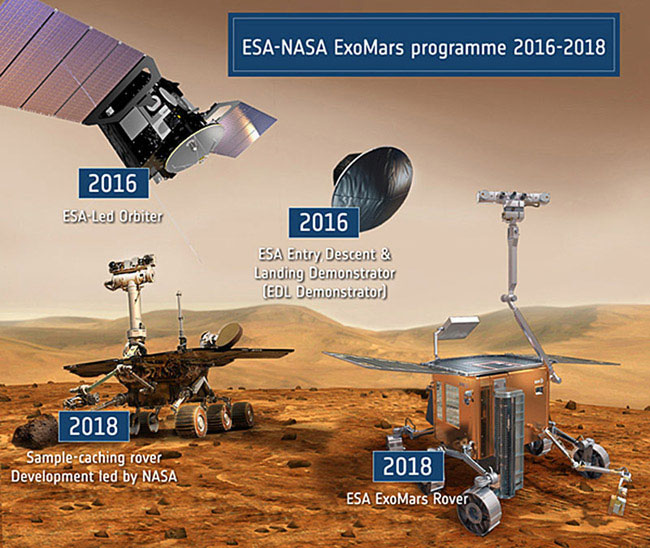