Our five senses aid in perceiving the world around us. And arguably, the most important of these is that of sight.

Sight, however, like all other senses, has its limitations. Beyond a certain point, our unaided eyes fail us. However, our curious selves are constantly pondering, and the desire to look at things beyond what we can look at naturally overcomes us; and hence, the desire to develop tools to aid our vision has arisen.

This need, supplemented by a better understanding of optics and fortunate accidents, has led to the invention of visual aids such as telescopes and microscopes. Perhaps the earliest instance of microscopes can be traced back to the ‘burning glass’ which essentially was a glass sphere used to focus sunlight to burn objects.

By way of a happy accident, in 1268, Roger Bacon broke a sphere and observed, “If anyone examines letters or other minute objects through the medium of crystal or glass or other transparent substance, if it be shaped like the lesser segment of a sphere, with the convex side toward the eye, he will see the letters far better and they will seem larger to him.

SpecON imaging setup and principle. (L) Schematic illustrating the highlighting effect near the coated substrate resulting from the modified excitation Point Spread Function. (Center) Sketch of the imaging setup used. (R) Analysis for spectral nanosectioning at two regions (A and B). The spectral modification relative to the absence of the substrate is in this case fitted by a function- the fitting parameters of which yield the mean and spread of the axial fluorophore distribution.

For this reason such an instrument is useful to all persons and to those with weak eyes for they can see any letter, however small, if magnifier enough”.[1] This observation, coupled with the knowledge of science of optics developed by early Muslim scientists such as Al-Kindi, Ibn Sahl and Ibn Al-Haytham has led to the advancement in the science of scopes.

As scientific curiosity and understanding has developed, and a thrust towards seeing minute objects surrounding us has unfolded, a need to enhance the science of microscopy has arisen. Various types of microscopes involving light, electrons and even van der Waal’s forces have been invented over the last few centuries. Perhaps the most popular, aside from optical microscopes, are scanning and transmission electron microscopes and atomic force microscopes.

A new entrant into the field of microscopy is fluorescence microscopy. The use of such a microscope is desirable in life sciences where colors are often used to distinguish between various features.

However, a disadvantage of such a microscope is an a priori need to physically scan the object to be imaged in the axial dimension, which could at times be optically sensitive.

To overcome the shortcomings of such an imaging technique a group of European scientists have developed a high-resolution light microscopy technique [2] which translates position into color markers for improved biological imaging in fluorophores. (A fluorophore or chromophore is a chemical which can re-emit light when excited by light).

In essence the technique involves the coating of the sample with fluorophores and then imaging the fluorescence, which has been color coded based on position, thereby, eliminating the need to scan the sample. The scientists were able to achieve a 3 dimensional mapping of 100-150 nm thick samples with an accuracy of 5-10 nm. 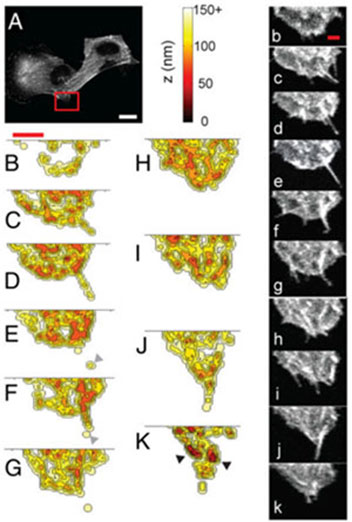 The shortcoming of such a technique is the requirement of intense computational modeling to process the data, which can be resource intensive. The group resorted to simplified models to process information resulting in a loss of accuracy. In addition, the need to study the adherence of fluorophores to the substrate material is also essential when it comes to imaging by such a method.

Another issue, is the need to calibrate the fluorescence spectra for each fluorophore which in itself, could be an extremely time consuming and tedious process. It was demonstrated that this technique could be successfully employed in imaging cellular samples, but it offers hope that by combing this imaging approach with fluorescence correlation spectroscopy to enhance spatial and temporal resolution, DNA structures can also be accurately studies.

One could also combine such an approach with atomic probe tomography to study the evolution of grain boundaries. However, to improve the quality and accuracy of this novel technique, extensive research is essential to synthesize new fluorophores and probes.

Only by further developments in this promising imaging technique, the general strategy of using hyperspectral imaging to reconstruct emitter distributions perpendicular to an interface may find applications beyond bioimaging and the visible frequencies.

For example, using metamaterial coatings with tailored electromagnetic responses that offer more design degrees of freedom, the general approach may also find applications in, for example, all optical readout on chips and remote sensing/tracking.

This article was first published in December 2013 and is currently republished for its importance.