The noise over whether the human race is at risk of radiation from cell phone use is as divisive as it is elusive, but lately, some countries appear to be taking notice.

Studies published in 2012 suggested that mobile phones may slowly be eating away the intelligence of unaware users, as the gadget continues to prove its unmatched power to place the planet in a new communication age.

Researchers exposed a group of rats to short doses of mobile phone radiation, a move that destroyed the rodents’ brain cells. This could lead to the early Alzheimer’s disease, they concluded.

“Symptoms such as fatigue, headaches, and burning sensations on the skin are more common among those who make longer mobile phone calls,” he reported.

There are also a growing number of unconfirmed reports of individuals whose health has been affected after chronic, frequent use of mobile phones, presumably from radiation effects on cells, Mild said.

Another study published in 1998 in the Lancet confirmed this too, after researchers tabled the first firm evidence that mobile phone use causes a rise in blood pressure.

“Not only are electronic gadgets causing serious harm to the environment when they pile up, but the health risks also come in equal measure,” says Ayub Macharia, an environmentalist.

The growing concerns about electromagnetic radiation was the subject of a November 2012 study which reported that even exposure to low level radioactivity is damaging. 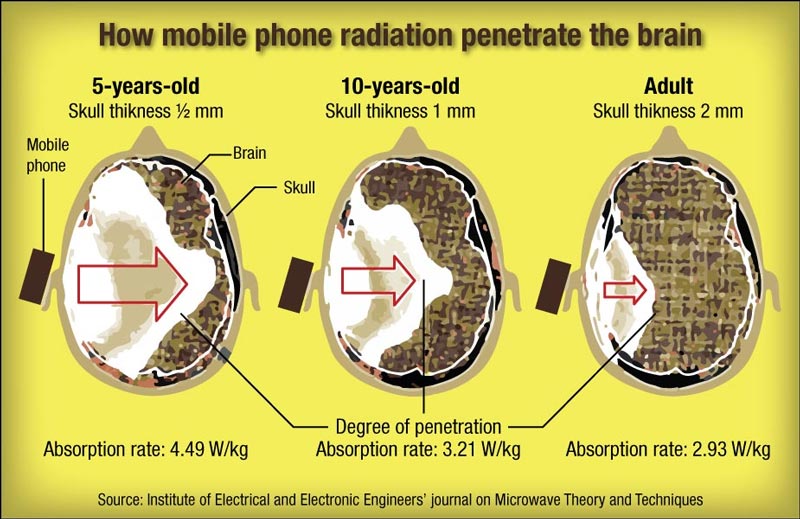 The review studied locations around the globe that have very high natural background radiation as a result of the minerals in the ground, including Ramsar in Iran, Mombasa in Kenya, Lodeve in France, and Yangjiang, China.

While the emerging trend appears to be causing jitters among the scientific community, entrepreneurs with a business edge have spotted a windfall in this buried treasure.

Scramble for what is now internationally referred to as ‘urban mining’, or scavenging for precious metals, such as iridium and gold, is already causing competition among the two leading  countries, Japan and China, as their traditional source markets continue to shrink.

Local dealers haven’t missed this emerging niche market, and some like mobile phone service provider, Safaricom, are reaching out with an electronic waste recycling program.

“The project will disassemble the gadgets and use what can be recycled locally to make plastic chairs and poles,” says Sanda Ojiambo, the head of corporate responsibility at the company.

It is now emerging that damaged cell phones are artificial deposits for precious metals such as gold, silver, copper, iridium, indium and a host of other metals that are reportedly in short supply at the world market.

Cell phone vendors say that this type of investment remains highly untapped, as most damaged mobile phones end up in popular waste dumping sites such as the Dandora landfill.

But the country office for the Erickson company couldn’t comment about the emerging market for cell phones, although officials confirmed that the damaged products are ferried back to Sweden.

Experts however point out that aircraft and ship building consume most of the world metals in supply, although space and nuclear science too are reportedly eating into the world’s metal deposits.

Studies of the current world prices for some of the precious metals revealed that they have in the last few years been hitting record highs, with gold scoring as one of the most demanded, yet undersupplied metals.

According to a study conducted by a Japanese-based recycling firm, Yokohama Metal Co. Ltd, a ton of ore from a goldmine produces just five grams of gold, while a ton of discarded mobile phones can yield 150g or more.

The same volume of discarded mobile phones, says the study, also contains around 100 kg of copper and 3kg of silver, among other metals.

This article was first published in 2012 and is currently republished for its importance.