Inspiration for Helicopters: The Dragonfly

The flight system of these insects is nothing less than a wonder of design. The world’s leading helicopter manufacturer, Sikorsky, finished the design of one of their helicopters by taking the dragonfly as a model.[1] IBM, which assisted Sikorsky in this project, started by putting a model of a dragonfly in a computer (IBM 3081).

Two thousand special renderings were done on computer in the light of the maneuvers of the dragonfly in air. Therefore, Sikorsky’s model for transporting personnel and artillery was built upon examples derived from dragonflies.

Gilles Martin, a nature photographer, has done a two year study examining dragonflies, and he also concluded that these creatures have an extremely complex flight mechanism.

The body of a dragonfly looks like a helical structure wrapped with metal. Two wings are cross-placed on a body that displays a color gradation from ice blue to maroon. Because of this structure, the dragonfly is equipped with superb maneuverability. No matter at what speed or direction it is already moving, it can immediately stop and start flying in the opposite direction.

Alternatively, it can remain suspended in air for the purpose of hunting. At that position, it can move quite swiftly towards its prey. It can accelerate up to a speed that is quite surprising for an insect: 25mph (40km/h), which would be identical to an athlete running 100 meters in the Olympics at 24.4mph (39km/h).

Following the collision, the rear legs of dragonfly take on the role of its most lethal weapons. The legs stretch forward and capture the shocked prey, which is then swiftly dismembered and consumed by powerful jaws.

The sight of the dragonfly is as impressive as is its ability to perform sudden maneuvers at high speed. The eye of the dragonfly is accepted as the best example among all the insects. It has a pair of eyes, each of which features approximately thirty thousand different lenses. Two semi-spherical eyes, each nearly half the size of the head, provide the insect a very wide visual field. Because of these eyes, the dragonfly can almost keep an eye on its back.

Therefore, the dragonfly is an assemblage of systems, each of which has a unique and perfect structure. Any malfunction in any one of these systems would derail the other systems as well. However, all of these systems are created without flaw and, hence, the creature lives on. 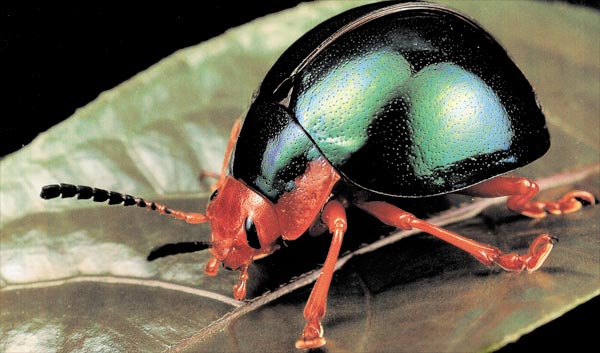 The wings of flies are vibrated according to the electric signals conducted by the nerves. For example, in a grasshopper each one of these nerve signals results in one contraction of the muscle that in turn moves the wing. Two opposing muscle groups, known as “lifters” and “sinkers”, enable the wings to move up and down by pulling in opposite directions.

Grasshoppers flap their wings twelve to fifteen times a second but smaller insects need a higher rate in order to fly. For instance, while honeybees, wasps and flies flap their wings 200 to 400 times per second this rate goes up to 1000 in sandflies and some 1mm long parasites.[2]

Another explicit evidence of perfect creation is a 1mm long flying creature that can flap its wings at the extraordinary rate of one thousand times a second without burning, tearing or wearing out the insect.

When we examine these flying creatures a little closer, our appreciation for their design multiplies.

It was mentioned that their wings are activated by means of electrical signals conducted through the nerves. However, a nerve cell is only capable of transmitting a maximum of 200 signals per second. Then, how is it possible for the little flying insects to achieve 1000 wing flaps per second?

The flies that flap wings 200 times per second have a nerve-muscle relationship that is different from that of grasshoppers. There is one signal conducted for each ten wing flaps. In addition, the muscles known as fibrous muscles work in a way different from the grasshopper’s muscles. The nerve signals only alert the muscles in preparation for the flight and, when they reach a certain level of tension, they relax by themselves.

There is a system in flies, honeybees, and wasps that transforms wing flaps into “automatic” movements. The muscles that enable flight in these insects are not directly tied to the bones of the body. The wings are attached to the chest with a joint that functions like a pivot. The muscles that move the wings are connected at the bottom and top surfaces of the chest. When these muscles contract, the chest moves in the opposite direction, which, in turn, creates a downward pull.

Relaxing a group of muscles automatically results in contraction of an opposite group followed by relaxation. In other words, this is an “automatic system”. This way, muscle movements continue without interruption until an opposite alert signal is delivered through the nerves that control the system.[3]

A flight mechanism of this sort could be compared to a clock that works on the basis of a wound spring. The parts are so strategically located that a single move easily sets the wings in motion. It is impossible not to see the flawless design in this example. The perfect creation of Allah is evident. 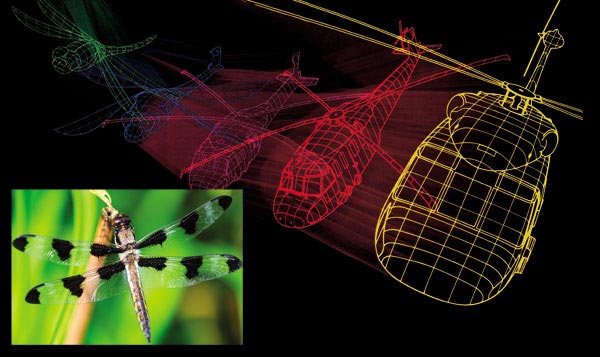 It is not enough to flap wings up and down in order to maintain smooth flight. The wings have to change angles during each flap to create a force of thrust as well as an up-lift. The wings have a certain flexibility for rotation depending on the type of insect. The main flight muscles, which also produce the necessary energy for flight, provide this flexibility.

For instance, in ascending higher, these muscles between wing joints contract further to increase the wing angle. Examinations conducted utilising high-speed film techniques revealed that the wings followed an elliptical path while in flight.

In other words, the fly does not only move its wings up and down but it moves them in a circular motion as in rowing a boat on water. This motion is made possible by the main muscles.

The greatest problem encountered by insect species with small bodies is inertia reaching significant levels. Air behaves as if stuck to the wings of these little insects and reduces wing efficiency greatly. Therefore, some insects, the wing size of which does not exceed one mm, have to flap their wings 1000 times per second in order to overcome inertia.

Researchers think that even this speed alone is not enough to lift the insect and that they make use of other systems as well. As an example, some types of small parasites, Encarsia, make use of a method called “clap and peel”. In this method, the wings are clapped together at the top of the stroke and then peeled off. The front edges of the wings, where a hard vein is located, separate first, allowing airflow into the pressurised area in between. This flow creates a vortex helping the up-lift force of the wings clapping.[4]

There is another special system created for insects to maintain a steady position in the air. Some flies have only a pair of wings and round shaped organs on the back called halteres. The halteres beat like a normal wing during flight but do not produce any lift like wings do. The halteres move as the flight direction changes, and prevent the insect from losing its direction. This system resembles the gyroscope used for navigation in today’s aircraft.[5]

It is evident that this system is an example of creation. No coincidental process can explain an intricate design. All of the systems that we have explored so far uniformly demonstrate that there is an extraordinary design to even the least significant of creatures such as flies. Any single fly is a miracle that testifies to the flawless design in the creation of Allah.

In the Qur’an, Allah invites all humans to consider this fact: Mankind! An example has been made, so listen to it carefully. Those whom you call upon besides Allah are not even able to create a single fly, even if they were to join together to do it. And if a fly steals something from them, they cannot get it back. How feeble are both the seeker and the sought! (Surat Al-Hajj: 73).