Fountain Magazine: Issue 87: May - June 2012 | If the world didn't rotate, the air on the Poles would get heavier with cold air and come down.
aaa

In old times, ships that set out for long journeys could not reach their exact destination in spite of keeping a steady course. It was because the captains who did their best to reach the correct destination, were making a then-unknown mistake in their calculations.

Imagine two men sitting on a rotating platform and facing one another. If one of them rolls the ball towards his friend, an observer from outside sees the ball roll along a straight line.

However, the man sitting on the rotating platform toward whom the ball was rolled sees the ball follow a curved line and go in a different direction.

Let us imagine the earth as a small sphere before us. If we throw an object from the North Pole toward point A on the equator line, the object follows a curved line towards the right side and reaches point B, not point A.

Likewise, an object thrown from the South Pole towards the same point A will follow a similar line curved in the opposite direction. These cases have a common point. An object rolling on a rotating ground moves on a curved line. This curved line, instead of a straight one, is explained with reference to the force of acceleration.

This force is named after the French engineer, Coriolis who explained it in 1835. If this force-which is generated by the earth rotating around its own axis-did not exist, then air movements and ocean currents, and consequently the climate conditions of our world, would be different than they are.

The objects in our example, thrown from the two poles, go in different directions, because the world rotates counter-clockwise when looked from the North Pole, and clockwise from the South Pole.

The air over the equator receives the sun’s rays at a broad angle. It rises up after gaining heat and is replaced by colder air coming from distant latitudes. Air convection begins in connection with these heat changes.

So if the world did not rotate, the air on the Poles would get heavier with cold air and come down.

Then, it would be replaced by hot air from lower latitudes. The air at the equator would rise up with gaining heat and would move until reaching the Poles where it would come down after losing heat. Then, it would return to the equator, this time very close to the ground.

In this case, the world would probably be an uninhabitable place with cold and fierce winds blowing all around. And of course, the side facing the sun would be very hot and the other side would be very cold.

Coriolis effect on great atmospheric masses moving over the rotating earth and the relevant wind currents.

As this air current approaches the latitudes around 30 degrees, it loses heat and descends. A part of the descending air begins to move back toward the equator, but it follows a curved line again owing to the Coriolis effect. So this last curving forms the “trade winds.”

This apparent deflection is called the “Coriolis force” and is a result of the earth’s rotation. As air moves from high to low pressure in the northern hemisphere, it is deflected to the right by the Coriolis force.

In the past, sailing ships traveled from Europe to America for the purpose of trade; thus, these winds were named as trade winds. This air circulation between the equator and the 30-degree meridians is known as Hadley circulation.

These air currents cause heavy rainfall in the equatorial region and the consequent formation of rain forests, which are considered as the lungs of our planet, and also they cause the formation of deserts around the region where the dry and hot weather are pure blessings for us.

They are a blessing because the airborne dust rising from the desert fertilizes the rainclouds and plays a critical role for rainfall.

The air over the poles becomes cold, and it causes another air current as it becomes heavier and starts to descend. As the lowered air moves toward the equator, it changes course with the Coriolis effect. At the same time it begins to gain heat and ascend.

At the latitudes where water ascends by gaining heat, a rain climate prevails. This polar air cycle is seen between latitudes of 60-90 degrees. Some part of the air current, which descends down around 30 degrees of latitude, moves toward the poles at a low level. Also, some part of the air which comes from the poles and ascends begins to move towards the equator.

So a third air cycling begins between the altitudes between 30-60 degrees. The “western winds” are brought forth from this third cycle. During the time of sailing ships, these winds were used to traveling from America to Europe. In order for these air cycles to happen, the earth’s rotation around its own axis is not sufficient; its speed and atmospheric mass also play an important role. If the earth rotated slower, the Coriolis Effect would be too weak to give way to a triple air cycle.

For example, since Venus rotates too slowly, there is only a single air cycle in its atmosphere. Another factor, as we mentioned, is the mass of the atmosphere.

Since the atmosphere of Mars is thin and its mass is relatively less, the Coriolis Effect is too weak and there is only a single air cycle.  Coriolis Effect prevents the air current from following a straight course and the isobars form twisters as they proceed. Therefore, hurricanes in the Northern hemisphere move counter-clockwise, and those in the south move clockwise.

Naturally, these main atmospheric movements are not the only ones. A region’s climate is dependent on several factors such as landscape, night-day heat differences, and the like. Therefore, the climatic conditions on the earth have a very complex structure.

Even when we consider just these few factors discussed here, it is evident that there are countless parameters that make human life possible in our planet, and each one is finely adjusted.

Even slight changes in rotation and the mass of the atmosphere would result in a dramatically different planet Earth.

Movement of air masses affects the water on the ocean surface as well. Thus, wind-generated surface currents are born. These currents are parallel with the relevant winds. It is a well-known fact that these huge bodies of water change the climate of the regions they pass.

Therefore, two places at 54 degrees of latitude show a surprising difference: there can be a polar bears’ park in Ontario, whereas palm trees and tropical fruits can grow in Belfast thanks to the Gulf Stream.

There are other warm ocean currents that pass from Brazil, and the north and south of the equator. Some of major cold surface currents pass from Labrador, Canada, the Falkland Islands, and Peru.

Warm currents soften the climate of the regions they pass, while cold currents provide sea creatures with rich food, and they are important areas of fishing.  The impact of the wind on ocean water normally reaches as deep as 100-200 meters, and even 1,000 meters in some cases. The Coriolis effect has a determining role on the direction of the currents. These currents on the move make a turn when their way is blocked by land.

Thus, the succession of ocean currents becomes a cycle, and they form the great current cycles named as “gyre.” They turn clockwise in the Northern Hemisphere and counter-clockwise in the south. There are five main ocean circulations on earth and each of them consists of four streams. These currents are at the north and south of the Atlantic Ocean, the north and south of the Pacific Ocean, and one in the Indian Ocean. The North Atlantic circulation is made up of the Northern Equator Current, the Gulf Stream, North Atlantic Current, and the Canary Current. With the Coriolis effect, a blessing of wondrous scale, food chains are brought to life in the ocean and around coastal regions.

This condition causes ocean waters to be pushed towards the circulatory center, and the water level there rises about 2 meters.  As rising waters move down with the effect of gravity, the Coriolis effect comes to the stage again to give way to another current in the same direction within that current. The waters that were rising toward the center begin to sink, and they form a new vertical current.

For the same reason, the separation of the water current to the right and left directions around the equatorial regions gives way to the waters at the bottom which then come to the surface. 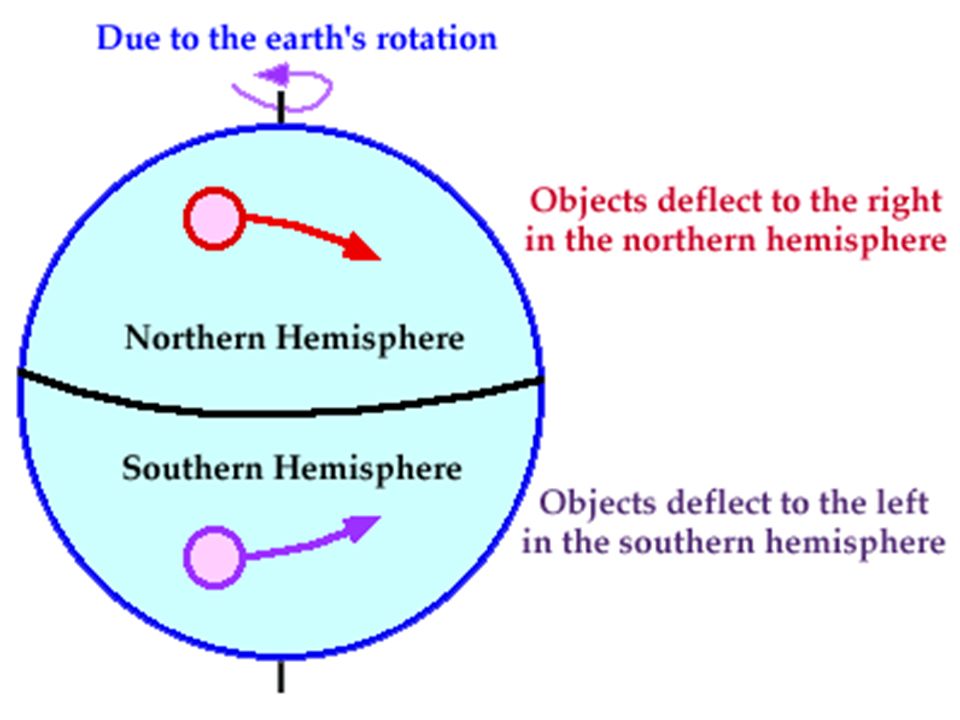 At these places, the water level decreases a little. This “upwelling” phenomenon has very important results. Dead organisms sinking down are broken down by bacteria in the deep waters.

When this nutrient-rich water returns to the surface, it is a great blessing for so many sea creatures. It is a striking fact that the rotating of the earth is a means for providing many living beings with sustenance.

All of these finely adjusted balances on our planet, which we mostly take for granted, provide reflecting minds with food for thought.