In 2008, the US Geological Survey released the 1st estimates of the oil locked in the Earth north of the Arctic Circle. (Image credit: stephenleahy.net)
aaa

While scientists and environmentalists worry about the melting of the Arctic ice cap, one of the major consequences of manmade global warming, oil companies are scrambling to profit from it.

Arctic ice is falling almost to its lowest level on record these years. This decrease in the ice levels opens the opportunity for oil companies to look for the undiscovered treasure in the Arctic ice region.

A decade ago in July 2008, the US Geological Survey released the first estimates of the oil locked in the Earth north of the Arctic Circle. It set the number at about 90 billion barrels, which represents 13% of the world’s undiscovered oil resources.

In June 2009, the geologists involved in the CARA (Circum-Arctic Resource Appraisal), program announced that the Arctic might hold as much as 160 billion barrels, which would amount to more than 35 years of US oil imports, or five years of total global oil consumption, worth more than 18 trillion dollars at current prices. (1)

The Arctic is one of the polar regions of the Earth at its far north. It includes the Arctic Ocean and parts of Canada, Russia, Greenland, United States, Norway, Sweden, Finland, and Iceland. The Arctic region consists of vast bulk of ice formed in the Arctic Ocean.

The polar regions are the most inhospitable parts in the entire world as well as the world’s most untouched ecosystem. But no matter how precious that might be, the oil industry still wants to explore and drill for more oil than it has already started to do.

Cairn Energy, a British oil exploration company, was the first to explore Hydrocarbons below the Arctic seabed, when they discovered traces of gas in Baffin Bay in 2010. Cairn Energy drilled four test wells in Baffin Bay off the west coast of Greenland. It began in 2009 with three wells, none of which struck oil.

In 2011, Shell, the giant Dutch company, started a huge project of with up to ten wells in Beaufort and Chukchi seas off the north Alaskan coast which holds 25 billion barrels of oil according to the US Geological Survey.

At the beginning of October 2010, ExxonMobil, the world’s largest oil and gas company, had formed an Arctic exploration partnership worth US$3.2bn with Rosneft, the Russian state oil group, to look for oil on the other side of the Arctic, in the Kara Sea off the coast of Siberia.

However, the environmentalists have major concerns and worries about this industrial development, warning from the possibility of a repeat of BP’s catastrophic Deepwater Horizon spill in the Gulf of Mexico in April 2010 – in the even more unforgiving conditions of the frozen north.

Greenpeace, a non-governmental environmental organization was one of the first sides refusing the new oil rush in the Arctic ice. Ben Ayliffe, an Arctic campaigner for Greenpeace, said to the independent on September 6 2010: “We’ve seen how our actions are changing the world, and the idea that we’re going to go and use the retreating sea ice as a business opportunity is frankly madness. The risks of drilling and producing oil in this fragile and pristine natural ecosystem, one of the last great wilderness areas of the planet, are terrible. “(1)

Greenpeace took action trying to disrupt the explorations that are being done in the Baffin Bay by Cairn. It responded by demanding Greenpeace to pay penalties for each day it prevented their oil drilling.

In a list of criticisms, the analysis pointed out that the plan itself admitted that oil clean-up operations after a spill wouldn’t be possible during an Arctic winter, and alleged that a “worst case” spill from a Cairn well would be very much worse than the company was allowing. 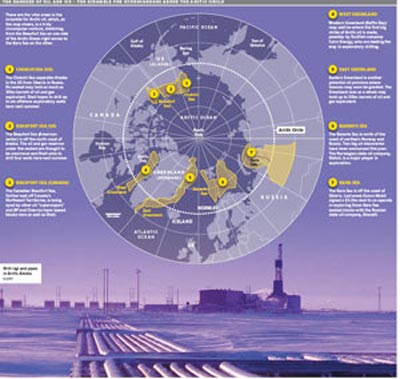 Peter Wadhams, a professor of ocean physics at the University of Cambridge, has emphasized that oil leak undersea in Arctic ice won’t only be very hard to deal with, but it will interact with the surface sea ice and become absorbed in it as well, then transported by it for as much as 1,609 km across the ocean.

He also explained that having a serious spill under ice in the Arctic will be much harder and catastrophic than having a major spill in the open water.

This means that the Arctic oil rush which was given a huge budget from ExxonMobil can be the riskiest form of oil exploration ever.

Wadhams was the first civilian scientist to travel under the Arctic ice in a submarine in 1971. He has good knowledge of oil-ice interactions, which is why he knows how difficult it is to have oil spilling in the ice.

He took part in large scale experiments off the coast of Canada in the 1970s where large quantities of oil were deliberately released unto the sea ice, to see how it interacted.

They found great difficulties, one of them that the spilled oil becomes encapsulated in the ice and the oil got constricted underneath the ice, making it impossible to immediately clean it up or burn it off.

The oil would then be transported thousands of miles around the arctic and get released again when the ice melts in the spring, so a huge area of the Arctic would become polluted.

“Once it is released in springtime, it’s very toxic, because the encapsulation in the ice preserves the oil from weathering, so that instead of the lighter fraction evaporating and the heavier fraction becoming just tar balls, you have fresh oil being released exactly where the ice is melting, usually round the edge of the pack ice where you’ve got a lot of migratory birds,” Wadhams told the independent. (2)

Some of the other things that make it very hard to deal with oil spills in the polar regions include ice encroachment, the remoteness of the Arctic, darkness, extreme weather, deep water, high seas, freezing conditions and icebergs.

The oil companies say that they take into their account the risks, and have prepared detailed plans for oil spill response.

A spokeswoman for Cairn Energy said about their spill response plan, that Oil Spill Response Ltd, The Danish National Environmental Research institute and the Greenland government have reviewed the plan and are all satisfied with it. She said that they believe it is robust and appropriately designed to deal with an incident in this area.

However, these plans are not satisfying for the environmentalists yet. Wadhams has read many of them and says that they aren’t comprehensive enough to deal with oil in ice.